RBB is a redirect to this article. Further meanings are listed under RBB (disambiguation) .

The Rundfunk Berlin-Brandenburg ( RBB , originally RBB ) is the national broadcaster for the countries Berlin and Brandenburg . The seat is in Berlin and Potsdam .

The rbb was created on May 1, 2003 through the merger of the broadcaster Free Berlin (SFB) and the Ostdeutscher Rundfunk Brandenburg (ORB). It is a member of the working group of the public broadcasting corporations of the Federal Republic of Germany (ARD) and has the legal form of a non-profit, legally competent public-law corporation .

Note : The original spelling of the station abbreviation, which deviates from the official spelling rules, is retained as a proper name in the article.

The first RBB logo after the merger in 2003

The rbb started broadcasting on May 1, 2003. He took over the programs of the previous SFB and the ORB:

Both programs were merged on February 29, 2004. Since then, only the regional programs Abendschau and Brandenburg aktuell have been broadcast separately .

Radio Kultur and Radio 3 were merged on December 1, 2003 to form the new Kulturradio program .

On May 21st, 2008 the management of the rbb announced that on December 31st, 2008 Radio Multikulti and the program Polylux should be discontinued. This was justified with the station's financial problems. With this measure, the rbb hoped to save EUR 36 million for the period 2009 to 2013.

Television center on Theodor-Heuss-Platz in Berlin 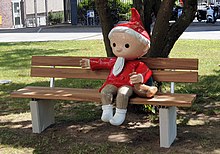 Sculpture of the Sandman by Thomas Lindner in front of Masurenallee 16, in Berlin-Westend

Entrance to the rbb site in the media city of Babelsberg

The Berlin location is on the one hand opposite the Berlin radio tower in the Charlottenburg-Wilmersdorf district in the " Haus des Rundfunks ", which opened in 1931 and in which the radio programs rbb 88.8 , Kulturradio and Inforadio are produced and whose two broadcasting rooms are also used for public concerts. and on the other hand in the new building on Theodor-Heuss-Platz that was built next to it in the years 1963–71.

The largest location of the transmitter is the rbb site in the media city Babelsberg , Potsdam , with an area of ​​over 30,000 m² . a. the modern television broadcasting center, office building and the radio houses for Antenne Brandenburg , Fritz and Radio Eins are located, as are the community facilities ARD Digital , the ARD Play-Out-Center, the editing of ARD-Videotext and the German Broadcasting Archive (DRA) Babelsberg . In addition to the editorial rooms, mask and archive, there are also the television studios, in which u. a. TV formats such as Brandenburg aktuell , rbb24 or zibb emerge.

In addition to the two main broadcasting houses in Potsdam and Berlin, the broadcaster also has studios in Cottbus and Frankfurt (Oder) and regional offices in Perleberg and Prenzlau .

Every five years, responsibility for the ARD studio in Warsaw changes between rbb and WDR. In the period from 2014 to 2019, it was held by rbb.

The Board of Directors comprises eight members who are elected for a four-year term; the last election took place on April 16, 2015. Wolf-Dieter Wolf has been the chairman since October 22, 2013 , in this position he succeeds Hartmann Kleiner , who has held the office since the rbb was founded. Jutta Quoos is the deputy chairwoman.

The editor-in-chief and deputy program director of the rbb is Christoph Singelnstein .

The rbb is largely financed by income from the broadcasting fee , which it receives both directly and through returns from the share of the state media authorities in accordance with Section 15a (2) sentence 2 of the State Media Treaty. In its business plan for 2016, the rbb assumed an annual deficit of almost EUR 27 million in its business plan, despite expected increases in income, mainly due to rapidly increasing pension costs.

Contribution income of the rbb:

The legal supervision of the rbb rotates according to § 39 State Treaty every two years between the State of Berlin - here the Governing Mayor of Berlin is responsible according to the business allocation plan - and the State of Brandenburg , State Chancellery. Based on the date of the first constituent meeting of the RBB Broadcasting Council on December 18, 2002, the change takes place on this date, starting with Berlin, followed by Brandenburg from December 18, 2004 and so on and so forth.

According to Section 30 of the State Treaty, the financial supervision and thus the authority to audit the budget and economic management as well as the accounting of the establishment rests jointly with the Audit Office of Berlin and the State Audit Office of Brandenburg .

The rbb has to ensure that both state treaty states Berlin and Brandenburg are supplied equally, taking into account the regional program needs. He currently produces the following television and radio programs - alone or in cooperation with other radio or television companies: 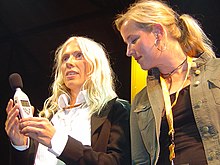 Anja Caspary , head of the music department at Radio Eins

The rbb has expanded its presence on the Internet since the late 1990s. All of the rbb's radio stations can currently be accessed as live streams on the Internet. As part of the ARD Mediathek , the rbb Mediathek offers a portal for freely available videos, live streams , news and multimedia content at the internet address www.rbb24.de . In April 2017, the Association of Newspaper Publishers in Berlin and East Germany (VZBO) filed a lawsuit against this online presence at the Potsdam Regional Court, since in its view the representation there is still too press-like despite a warning and therefore violates the State Broadcasting Treaty. The judgment issued on July 25, 2018 confirmed this view: The design of the portal was inadmissible at the relevant time. The RBB now wants to have this judgment reviewed by the next higher instance and appealed to the Brandenburg Higher Regional Court on September 6th .

For ARD, the rbb produces crime films for the series Tatort and Polizeiruf 110 , the political magazine Kontraste and the satirical program nuhr im Erste (until 2014 under the name Satire Gipfel ), which has been broadcast since 2009 as the successor to the windshield wiper . Since 2018 the rbb has taken over the production of the ARD-Mittagsmagazin .

From 2003 to 2005 rbb television broadcast The Kurt Krömer Show , which received national attention. Since then, the station has been producing the follow-up formats Bei Krömers (2005/06) as well as Krömer - Die Internationale Show (2007–2011) and Krömer - Late Night Show (2012–2014) for Erste (ARD). Since 2005 rbb television has also broadcast the talk show Thadeusz , in which presenter Jörg Thadeusz welcomes prominent guests from politics, business and culture. This program became known especially for its Fiese Sieben column , within which the respective guest is consciously confronted with subjectively formulated questions.

The regional news program Berliner Abendschau, which was taken over and continued by the SFB, is also well known in the capital region . Since 1958, initially with a slot on the ARD (including Germany-wide broadcast of John F. Kennedy's visit to Berlin ), later in the third program of the SFB, the evening show as a city magazine reports on politics, economy, sport and current affairs in Berlin.

The transmitter mast for VHF and TV on Berlin's Scholzplatz has been the only transmitter operated by rbb itself since 2006.

The television program is transmitted digitally as DVB-T . It is also in Mecklenburg-Western Pomerania, Saxony, Saxony-Anhalt and Thuringia within the bouquets of the NDR resp. MDR to see.

In addition, the radio and television programs can be received in both analogue (television only) and digitally via satellite and many cable networks.

In addition to the VHF transmission of the radio programs, the rbb is participating in the DAB pilot project.

Since June 2013 the rbb has also been offering a live stream on its own website.

An MW transmitter on Stallupöner Allee in Berlin was switched off on January 1, 2006 and later dismantled.

The rbb has stakes in the following companies and institutions (the amount of stake in brackets):

In 2016, according to Rundfunk Berlin-Brandenburg, a "serious incident", a conflict of interest in their own ranks, was made public: For a broadcast of the ARD morning magazine, reporter Viktoria Kleber interviewed employees of a Berlin advertising agency with which she herself had a close business connection had not communicated this fact beforehand. After a complaint was received about this case, the DRPR issued a complaint to Kleber in September 2017.

In its 2018 annual report, the Berlin Court of Audit clearly criticized the level and structure of remuneration at the rbb. The complaint is that "the rbb did not have a uniform collective bargaining system at the time of the audit and has still not completely standardized the terms and conditions of work and remuneration since it was set up, its employees significantly better than those within the scope of the TV-L , and areas of work not properly assesses, grants allowances as well as non-tariff benefits which are not justified and documented with regard to their necessity or amount, the tasks of a family pension fund are still performing the tasks of a family fund itself and in some cases inadequately ”.

In addition, as with the other public broadcasters, the amount of the director's salary is the subject of regular public criticism at the rbb. For the current director, Schlesinger, it is 257,000 euros annually (as of 2018), after the previous figure it was 240,000 euros for her predecessor Reim. The adequacy of the company pension scheme is also controversial.

The painting of the rbb cars with claims such as “BUT NOT BORED” meets with criticism from both employees and outsiders, as they are often near accident sites or in areas where the rbb has a bad reputation. Individual cars with less offensive paintwork were purchased, but these are not enough to prevent such situations.

Use of space by third parties

The German television ballet , which has now been privatized, has had its headquarters in the television center since 1992 , since rehearsal studio C there has been expanded as a ballet hall since it opened in 1971. The German Symphony Orchestra Berlin is rehearsing its performances in the “ Ferenc Fricsay Hall”, which was built in 1995 from a part of the former porch in which large-format television sets were previously built.

The rbb has an art collection with works by Otto Antoine , Lutz Brandt , Christo , Carla Fioravanti , Rolf Händler , Thomas Hartmann , Harald Metzkes , Arno Mohr , Kurt Mühlenhaupt , Karl Oppermann , Hans-Otto Schmidt , Friedrich Schötschel , Herbert Tucholski , Ulla Walter . The husband of the former director Reim, Rudolf Großkopff, who also performs this function at NDR , acts as the art commissioner . Part of the collection has been on view since 2005 as a traveling exhibition curated by Großkopff with the title Land, Stadt, Land - Views of Brandenburg and Berlin at changing locations in Berlin and Brandenburg. The Berlin-Brandenburg Broadcasting Corporation has so far not given any information about the entire scope and value of the art collection. However, the number of works of art was quantified by the art commissioner in a contradicting manner and ranges from “around 75 images” (Großkopff 2008) to “350 to 400 images” (Großkopff 2010).

Programs of the broadcasting company Berlin-Brandenburg