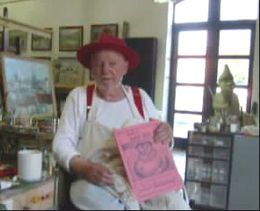 Kurt Mühlenhaupt in his studio, 2004

Kurt Mühlenhaupt (born January 19, 1921 in Klein Ziescht , Jüterbog-Luckenwalde district ; † April 16, 2006 in Zehdenick , Bergsdorf district ) was a German painter , sculptor and writer . He became known as a Kreuzberg milieu painter and belonged to the group of Berlin painter poets founded in 1972 , a community of painting writers such as Günter Grass , Aldona Gustas , Artur Märchen , Nepomuk Ullmann and Wolfdietrich Schnurre .

Kurt Mühlenhaupt was born on a train journey from Prague to Berlin . The village of Klein Ziescht , which was closest to the birth, was entered in his birth certificate as the place of birth. The family lived in a garden colony in Berlin-Tempelhof . As a child he painted animals for his friends and at the age of twelve had the goal of becoming a painter.

After school education and an apprenticeship as a model maker, he was trained as a paratrooper and initially deployed in Narvik (Norway). When jumping over Crete , a bullet wounded his left wrist, the joint remained stiff forever. He continued to paint during the hospital stays. Consequently, in 1943 he began to study art in Berlin. After another war wound, he attended the private art school of the West for a year , which he left again after several disappointments and a mental breakdown. In the last year of the war, Mühlenhaupt was drafted as a "cripple" and only survived his mission in North Africa with luck, his left heel bone was torn to pieces.

He found it difficult to come to terms with his experiences during the Second World War , so that they burdened him physically and mentally throughout his life. In 1994 an old war wound broke out again, which tied him to bed for two years.

From 1946 to 1948 he studied at the Berlin University of the Arts . In 1946 he took part in the “Young Generation” exhibition with great success. His request to become a student of Karl Schmidt-Rottluff in 1948 was rejected by Karl Schmidt-Rottluff : “You will never become a painter, you are too gray.” After the resulting psychological breakdown and a long stay in a psychiatric hospital, he then worked as an animal breeder , Junk dealer and organ grinder and soon began to paint again as an autodidact . His favorite motifs at the time were portraits of people from the working class. Disappointed by developments in the GDR , the family moved from Berlin-Karow to Marienfelde in 1956 .

In 1958 he moved with his family to Kreuzberg . In the second-hand shop and restaurant business, he found a lot of ideas for new pictures that were “typically from Kreuzberg”. As a milieu painter, he was often compared to Otto Nagel and Heinrich Zille . In 1960 he took part in the Great Berlin Art Exhibition for the first time, which made his name known beyond the borders of Kreuzberg. In 1961 he founded the artist pub "Leierkasten" in Kreuzberg. In this restaurant, which was on the corner of Baruther / Zossener Straße opposite the cemeteries at Halleschen Tor , Günter Bruno Fuchs , Robert Wolfgang Schnell and Artur Märchen also frequented the artists mentioned above .

When he moved to his new atelier at Chamissoplatz  8 in 1970 , he was able to live only from painting for the first time. Stylistically, his works alternate between naive painting and expressionism.

Kurt Mühlenhaupt also worked in two films by Ulrich Schamoni : in Quartet im Bett from 1968 (with Ingo Insterburg and Karl Dall ) and together with his brother in the film Mein Bruder Willi (1972/1973). 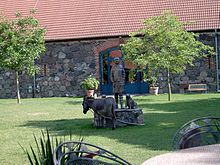 His “Dudu-Zwerge” and “ Feuerwehrbrunnen ” (1981) on Mariannenplatz in Kreuzberg still testify to his ceramic and sculptural work .

Mühlenhaupt made trips to the Berlin area as early as the 1970s. He was particularly enthusiastic about the landscape on the upper Havel with its wide fields, meadows and roads. After the fall of the Wall, he and his wife Hannelore expanded an old manor in Bergsdorf near Zehdenick , which he used as a new home, studio, gallery and event location. The Kurt Mühlenhaupt Museum was at home there until summer 2019 .

He was unable to complete his eleven-volume autobiography, corresponding to the number of letters in his name. It ends in 2004 with volume X (P), which contains travel experiences between 1970 and 1989.

Fire fountain at Mariannenplatz in Berlin-Kreuzberg

After the death of Willi Mühlenhaupt (1907–1977), who was buried in the Bohemian Lutheran Bethlehem Cemetery in Kreuzberg, Kurt Mühlenhaupt designed a grave complex there from 1978 for his brother, himself and other family members who find their final resting place here should. Originally there were four stainless steel steles with mounted enamel pictures. After the portraits were stolen in the mid-1980s, Mühlenhaupt designed four concrete steles with colored portraits in a naive style to replace them. The inscriptions in the upper area refer to those actually buried here, and below to other family members who are resting elsewhere.

Kurt Mühlenhaupt died in Zehdenick in 2006 at the age of 85. He was buried in the tomb he designed himself in the Bethlehem cemetery. By resolution of the Berlin Senate , the last resting place of Kurt Mühlenhaupt has been dedicated to the State of Berlin as an honorary grave since 2018 . The dedication is initially valid for the usual period of twenty years, but can then be extended.