Nono was born the son of the engineer Mario Nono (* 1890; † 1975) and his wife Maria (* 1891; † 1976; nee Manetti ). He came from a long-established Venetian family; his parents gave him the first name of a grandfather who was an important painter from the Venetian school of the 19th century. As a high school student he received piano lessons and in 1941 became an external student in composition with Gian Francesco Malipiero at the Accademia musicale Benedetto Marcello in Venice. At his father's request, after graduating from high school in 1942, he studied law in Padua . In 1946 he finished his studies with a diploma, in the same year he met Bruno Maderna , with whom he took private composition lessons. In 1948 both attended a conducting course with Hermann Scherchen as part of the Venice Biennale , whom Nono then accompanied on a concert tour to Zurich and Rapallo. Via Scherchen, Nono gained access to the musical tradition of the German-speaking area, in particular to the music and musical thinking of the Second Viennese School .

In 1955 he married Nuria Schönberg (born 1932), whom he had met the year before in Hamburg at the premiere of her father Arnold Schönberg's opera Moses und Aron . The couple had two daughters, Silvia (* 1959) and Serena Bastiana (* 1964).

In 1950 he first took part in the Kranichsteiner / Darmstadt Summer Courses for New Music , where his Canonical Variations on a number of Schönberg's op. 41 were premiered under Scheren's direction. He took part in these courses regularly until 1960, when a total of seven of his compositions were performed, and from 1957 to 1960 he was also a lecturer there. Together with Karlheinz Stockhausen , with whom he first met in Darmstadt in 1952, and Pierre Boulez , whom he met a year later accompanied by Scherchen during a stay in Paris, he was considered one of the leading representatives of the new serial music of the so-called in the 1950s Darmstadt School .

In 1952 Nono joined the Italian Communist Party , where he was active throughout his life at the local and national level. Since 1969 he corresponded with his party friend and later President of the Republic of Italy Giorgio Napolitano , who had written theater and music reviews during his law studies, and discussed political issues with him above all. While Nono was committed to Cuba and the revolution and made strong for the Third World, Napolitano relied more on east-west detente .

Initially, his pieces were often characterized by high density and volume, which sometimes went to the limit of pain. Nono spread humane and political or class-struggle ideas through the means of new music. Examples of social and political engagement were increasingly pieces from the 1960s on intolerance and violence against refugees ( Intolleranza , 1960/61), the consequences of a nuclear war ( Sul ponte di Hiroshima , 1962), the alienation and stress of the capitalist world of work ( La fabbrica illuminata , 1964), the Holocaust ( Ricorda cosa ti hanno fatto in Auschwitz , 1965), the Spanish civil war ( Epitaffio a Federico Garcia Lorca ), anti-fascist resistance ( Il canto sospeso ), or the student revolt of the late 1960s ( Musica -Manifesto n.1 ). His musical processing of these thematic complexes, however, consistently made use of the means of new music and not the musical ideas of socialist realism . Later Nono tended to be more subtle, lyrical seclusion such as B. in the string quartet Fragments - Stille, An Diotima . From 1960 onwards, beginning with his first tape composition Omaggio a Emilio Vedova , he turned to an occupation and research into the possibilities of electronics in music, which continued until his death. Nono began to work in the Freiburg experimental studio of the Heinrich Strobel Foundation . The works created there are in part on the edge of the audible.

In the 1970s Nono had met the philosopher Massimo Cacciari , with whom he worked closely in the following years. Cacciari also provided the text material for Prometeo . Tragedy of Hearing (1984), Nono's last major music theater project together. 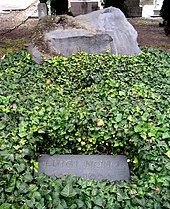 After Luigi Nono, according to his family, had recently been in hospital because of a liver disease, he died on May 8, 1990. He is buried in the San Michele cemetery in Venice.

After his death in 1990, Nuria Schönberg-Nono set up the Archivio Luigi Nono , initially in her apartment on the Giudecca . She was supported by Massimo Cacciari, who had become mayor of Venice. In the same year, Nono's friend and artistic-intellectual elective relative, GDR author Heiner Müller (1929–1995), designed a three-dimensional environment as an intermedial memorial within the urban identity campaign Marking the City Boundaries (master plan: Daniel Libeskind ) in Groningen / NL, the he gave the title of his poem Fragment for Luigi Nono from 1985. In the autumn of 2006 the archive moved to the former Giudecca monastery of Santi Cosma e Damiano and was converted into a foundation. At the end of March 2007, the then Italian President Napolitano opened the new Archivio Luigi Nono.

The composers Helmut Lachenmann and Nicolaus A. Huber are students of Luigi Nono .

Nono's work biography can be roughly divided into three phases based on the instrumentation used: The first extends over the 1950s and is characterized by serial compositions for a changing number of instrumental or vocal soloists. The phase in the Azione scenica Intolleranza in 1960 reached its first culmination . The second phase (1960–1975) is mainly characterized by the use of tape and the first intensification of studies on spatial sound. It flows into the second Azione scenica Al gran sole carico d'amore . In the last phase of his work until his death, Nono used experimental processes with live electronics . These studies lead to the work Prometeo in close collaboration with Hans-Peter Haller and the experimental studio of the Heinrich Strobel Foundation of the SWR. In the last years of his life, Nono has devoted himself primarily to works with chamber music ensembles.