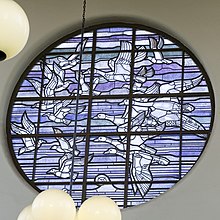 Heinrich Mathias Ernst Campendonk (born November 3, 1889 in Krefeld , † May 9, 1957 in Amsterdam ) was a German-Dutch painter and graphic artist .

Campendonk, the son of a textile merchant, broke off an apprenticeship in textile science in 1905 and from 1905 to 1909 received artistic training from Jan Thorn-Prikker at the then very progressive arts and crafts school in Krefeld - today the Niederrhein University of Applied Sciences . He was friends with Hans Kruzwicki , Helmuth Macke , August Macke , Wilhelm Wieger , Franz Marc and Paul Klee . In 1909 he made first contacts with members of the Neue Künstlervereinigung in Munich . With the support of Wassily Kandinsky and Franz Marc, Heinrich Campendonk found a connection with the group that became famous under the name “ Blauer Reiter ”. He took part in the group's two exhibitions in 1911 and 1912 and became a member in 1912. In 1913 he took part in the First German Autumn Salon in Berlin and in the exhibition " Rhenish Expressionists " in Bonn . After completing his military service from 1914 to 1916, he moved to Seeshaupt and was a member of the work council for art from 1919 to 1921 .

Heinrich Campendonk lived in the Rhineland between 1923 and 1933 . In 1923 he became a teacher at the Kunstgewerbeschule in Essen. In 1926 he was appointed professor of glass painting , wall painting , mosaic and tapestry weaving at the Art Academy in Düsseldorf , where he worked until 1933. After Hitler came to power in 1933, he was dismissed in Düsseldorf on the basis of the “ Law for the Restoration of the Professional Civil Service ”. Heinrich Campendonk left Germany in 1934 and first emigrated to Belgium and from there to the Netherlands. The defamation of his pictures under the catchphrase “ degenerate art ” (87 of his works were confiscated) he had to witness from exile in Amsterdam . There he accepted a professorship at the Rijksakademie van beeldende kunsten in 1935 . In 1937 he was represented in the Munich “Degenerate Art Exhibition” with six of his works. In the same year he presented a window with the Arma Christi for the Netherlands at the world exhibition in Paris , for which he won the Grand Prix. After the war Heinrich Campendonk did not return to Germany, but stayed in Amsterdam, where he died on May 9, 1957, honored and naturalized as a Dutchman.

His work moved in the area of cubism , futurism , expressionism and the strict geometric design language. Campendonk shaped Rhenish Expressionism .

During his stay in Sindelsdorf from 1911 to 1916 and Seeshaupt from 1916 to 1922, Campendonk was the only member of the artist group to repeatedly process scenes from the mining town of Penzberg (e.g. "Penzberger Reiter", "Barbarazeche", "Vorstadtbauern", "Hohes Bild mit Horses ”,“ Bavarian Landscape with Cart ”and others).

The two only surviving wall paintings by Campendonk, "Cats" and "Harlequin", can be seen in today's Nazi memorial at Villa Merländer in his native Krefeld. The pictures were painted over by the owner of the house, Richard Merländer , during the National Socialist era and were forgotten. The pictures were only rediscovered in 1991, uncovered by 1998 and made available to the public in the same year. The two pictures were created in 1925 and painted directly on the fresh, dry plaster of the new house. Campendonk was not doing very well financially during this time, which probably forced him to take on commissioned work like this. This was also reflected in his painting style and above all in the motifs he chose. The harlequin in one of the mural is depicted as a listless, sad clown with his lips drawn down. It is believed that Campendonk painted many more such pictures as commissioned work on the walls of wealthy art lovers of his time, but to this day no other surviving murals of this type are known of him.

The Maria Grün parish church in Hamburg-Blankenese , built between 1929 and 1930, was furnished with glass windows by him.

In the Christ the King's Church in Penzberg there are two more glass windows designed by Campendonk. The “Passion Window” was created in 1937 at the same time as Campendonk's art movement was being opposed by the Nazis as “degenerate”, in exile in the Netherlands as a contribution to the Dutch pavilion at the world exhibition in Paris . It was awarded the Grand Prix there. In Penzberg there is a new version in the dimensions 55 × 155 cm. The “Isaiah” window from 1954 was originally part of a design for a huge north window in Cologne Cathedral . This window was created as a colored test piece with the dimensions 349 × 106 cm. Ultimately, for health reasons, Campendonk had to forego the execution of the entire window in Cologne Cathedral. This design has now found its final place in the church, consecrated in 1951.

Further glass windows by Campendonk are in Essen Minster , the Michael window and in the mezzanine floor of the westwork . He also created windows for the Protestant Jesus Christ Church in Cologne-Kalk , the Catholic parish church of St. Matthew in Vochem (Brühl) and St. Paul in Düsseldorf .

In 1930 Campendonk created the cycle of stained glass windows in the crypt of the Bonn Minster Church . In the Netherlands, glass windows designed by Campendonk can be found in public buildings, banks and churches.

Further works by Campendonk are kept in the Clemens Sels Museum Neuss , in the Kaiser Wilhelm Museum Krefeld , a complete group of works, including the reverse glass painting "Pierrot with Snake", and in the German Glass Painting Museum Linnich . In 1955, works by Heinrich Campendonk were exhibited at documenta 1 in Kassel .

After the city council of Penzberg rejected the purchase of 89 works from the artist's estate in March 2010 , the whole lot was purchased by the Mast (“Jägermeister”) family and loaned to the city of Penzberg in June of the same year. Since 2016 the collection has been on permanent display in the expanded “ Museum Penzberg - Campendonk Collection”.