Conrad Felixmüller (actually Conrad Felix Müller ; * May 21, 1897 in Dresden , † March 24, 1977 in Berlin-Zehlendorf ) was a painter of Expressionism and New Objectivity . 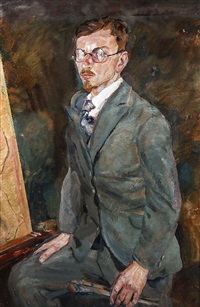 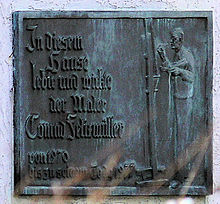 Memorial plaque on the house, Rönnestrasse 18, in Berlin-Charlottenburg 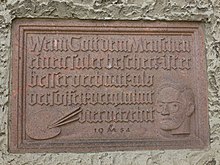 Conrad Felixmüller was the son of the Dresden factory blacksmith Ernst Emil Müller and his wife Maria Carolina. He grew up as Conrad Felix Müller. In 1924, on the advice of an art dealer, he adopted the stage name "Felixmüller".

After giving up music studies in 1911, he began studying at the Dresden Art Academy in autumn 1912 . In the following year an intense friendship developed with Peter August Böckstiegel , who married Conrad's sister Hanna Müller in 1919. In 1914 he became a master student of Carl Bantzer . Felixmüller acquired his graphic techniques of woodcut, copper and steel engraving and etching on an autodidactic basis.

As early as 1915 he became self-employed as a freelance artist and exhibited in 1916 in the Galerie Sturm (Berlin) and in 1917 in the Galerie Hans Goltz (Munich). In 1917 he refused military service and was conscripted as a nurse. From 1918 he was financially supported by the Wiesbaden art collector Heinrich Kirchhoff for two years . During this time he kept in close contact with Wiesbaden, where he stayed several times and where he created his family portrait Kirchhoff (1920; today Museum Wiesbaden ). In 1919 he became a founding member and president of the Dresden Secession Group. 1919 with Lasar Segall , Otto Dix and Otto Griebel and a member of the November Group . From 1919 to 1924 he was a member of the KPD .

He wrote picture contributions for the left-wing magazines Die Aktion und Menschen , represented the life of the people in the Ruhr area in pictures. In 1928 he won the Grand Prize of the Saxon Art Association (Dresden) and exhibited in 1929 in the Gurlitt gallery in Berlin .

To the conveyor in the era of National Socialism was Hanns-Conon from the Gabelentz . In 1933 his works were outlawed in the exhibition "Degenerate Art" in Dresden. In 1934 he moved to Berlin-Charlottenburg . In 1936 around 40 of his works were part of the National Socialist exhibition "Degenerate Art" ; Felixmüller was excluded from the Berlin Artists ' Association. In 1937 his paintings were removed from all public collections. The National Socialists destroyed a total of 151 of his works between 1938 and 1939. In 2012 a watercolor “Couple in Landscape” (1924) appeared at the Schwabing art find . In 1941 he relocated to Darmsdorf because of the threat of bombing . His Berlin domicile was destroyed in a bombing raid in 1944 and he moved to Tautenhain near Leipzig in 1944 . After a short military service (1944/45) he was taken prisoner by the Soviets in 1945 .

In 1949 Felixmüller was appointed professor at the pedagogical faculty of the University of Halle . Here he taught until 1961 and after his retirement he went back to Berlin-Köpenick . In 1967 he moved from the GDR to Berlin-Zehlendorf ( West Berlin ), where he died on March 24, 1977, just a few weeks before his 80th birthday.

He was buried in the Zehlendorf cemetery . There is a relief plaque on the tombstone showing the artist at the easel. It was created by the sculptor Heinz Spilker . By resolution of the Berlin Senate , the last resting place of Conrad Felixmüller (field 019 / 293-4) has been dedicated as an honorary grave of the State of Berlin since 2001 . The dedication is temporarily limited to the usual period of twenty years.

Conrad Felixmüller was a member of the German Association of Artists .

Conrad Felixmüller's grave of honor in the Zehlendorf cemetery

Felixmüller's oeuvre includes around 2,500 paintings, drawings and graphics. In his works, the human being is the main motif. Felixmüller saw himself as a socially critical expressionist, his pictures powerfully reflect scenes from everyday life. Characteristic features of his representations were the prominent forehead and the large-format eyes. Felixmüller's works reflect an extremely individual character of expressive realism . In the course of the 1920s he increasingly turned to motifs from the family environment. Felixmüller's also artistically significant written estate has been in the German Art Archive in the Germanisches Nationalmuseum , Nuremberg, since 1980 .

His works were shown in numerous exhibitions in both parts of Germany and abroad during his lifetime.