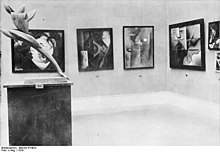 View into the hall of the Novembergruppe, Great Berlin Art Exhibition 1919 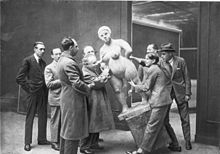 Preparations for the opening of the Great Berlin Art Exhibition, June 1924

The November Group was an artists' association founded in Berlin on December 3, 1918 , which mostly had more than 120 members. It was named after the November Revolution of 1918. After the transfer of power to Hitler in 1933, the group of artists had to stop their work. In 1935, its end was sealed with the deletion from the city's register of associations.

History of the artist group

In the first few months, 170 artists joined the newly founded November group: 49 of them came from the editorial team of Herwarth Walden's magazine Sturm . At the beginning, the artist group was joined by Italian futurists , important DADA artists and important Bauhaus members, some of whom belonged to the older Werkbund .

The artists of the Novembergruppe described themselves as radical and revolutionary . Their work, similar to that of the Arbeitsrat für Kunst , to which they were closely related, was intended to support the social revolution in Germany. The main goal of the artists was the union of art and people . In addition, the group tried to influence public cultural tasks.

In 1921, especially artists from the left wing of the November group formulated an appeal against the bourgeoisisation of the artists' association. The appeal was signed by Otto Dix , George Grosz , Raoul Hausmann , John Heartfield , Hannah Höch , Rudolf Schlichter and Georg Scholz and published in the Opponent .

In 1922, the November group's decentralized work with the local groups was given up. The November group was integrated as an important part of the cartel of progressive artist groups in Germany .

A style syncretism , which is often referred to as Kubofuto expressionism , is characteristic of the artists of the November group . The word creation relates to cubism , futurism and expressionism . The November group was known for the diversity of its styles and disciplines, but has also been criticized for this inconsistency and the difficult stylistic classification associated with it.

In addition to the painters, artists from the fields of architecture and music were represented. The music section, led by Max Butting (later replaced by Hans Heinz Stuckenschmidt ) with its workshop work, was one of the most productive forces.

As the most important means of self-expression, exhibitions were organized regularly. Every year the members of the artist group were represented at the Great Berlin Art Exhibition with their own November group room . In addition, they exhibited together with the artists of their local groups scattered across the republic (Halle artist group, forces, Die Kugel , Gruppe Rih , Üecht , Dresdner Sezession Gruppe 1919 , Das Junge Rheinland , De Stijl ).

The November Group invited major international artists or representatives of artist groups to its exhibitions. In 1919 Marc Chagall , in 1920 Georges Braque , Fernand Léger and Marie Laurencin , 1922 Henryk Berlewi and 1923 El Lissitzky (with his legendary Proun room) were represented in the November Group department at the Great Berlin Art Exhibition. Also in 1923 Iwan Puni and László Péri were among the exhibitors.

One of the most important international exhibition collaborations was the collaboration with the Italian Futurists in Rome in 1920, which was arranged by Filippo Tommaso Marinetti and the November group member Enrico Prampolini .

Women in the November group

As in other revolutionary artists' associations, there were only a few women on the November Group membership list. Of the 49 founding members from the Sturm circle, Hilla Rebay was only one woman, although a large number of women were active in the Sturm area . It was different with exhibitions of the November group. Several women in art took part here , in addition to Hannah Höch and Marie Laurencin, for example, Emy Roeder and Emmy Klinker .

The initiators of the establishment were mainly the painters Max Pechstein and César Klein , as well as Georg Tappert , Moriz Melzer and Heinrich Richter-Berlin , who had been active in the New Secession in Berlin, which was dissolved in 1914 . At the first meeting on December 3, 1918, at which the foundation was sealed, also took part: the painters Karl Jakob Hirsch, Bernhard Hasler , Richard Janthur, Rudolf Bauer (artist) , Bruno Krauskopf, Otto Freundlich , Wilhelm Schmid , the sculptor Rudolf Belling and the architect Erich Mendelsohn . The first working committees of the November Group were formed in this way.