Herwarth Walden (actually Georg Lewin ; born September 16, 1878 in Berlin ; † October 31, 1941 with Saratow ) was a German writer, publisher, gallery owner, musician and composer. Walden was one of the most important promoters of the German avant-garde of the early 20th century ( Expressionism , Futurism , Dadaism , New Objectivity ). In 1910 he founded the magazine Der Sturm , which existed until 1932. From 1912 he ran the Sturm Gallery; under his direction, the exhibition of the First German Autumn Salon took place in Berlin in 1913 . The poet Else Lasker-Schüler was his first wife. 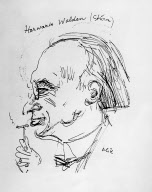 Georg Lewin, who came from a wealthy Jewish family, studied composition and piano in Berlin and Florence in his youth. His musical talent and the artistic training he had chosen distanced him from the upper-class world of his parents' house at an early age. He wrote poetry and prose and was a critic for literature , music and art . In 1903 he founded the "Association for Art", which in the following years included a large number of important writers such as Heinrich and Thomas Mann , Frank Wedekind , Rainer Maria Rilke , Richard Dehmel , Alfred Döblin and Else Lasker-Schüler .

Lewin and Else Lasker-Schüler married on November 30, 1903. The marriage ended in divorce in 1912. At the suggestion of Lasker-Schülers, Lewin chose “Herwarth Walden” as a pseudonym, based on Henry Thoreau's novel Walden; or, Life in the Woods (1854). 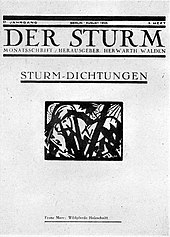 From 1910 to 1932 Walden published the magazine Der Sturm , which he founded together with Alfred Döblin and which was one of the most important publications of Expressionism. The literary collaborators included Peter Altenberg , Max Brod , Richard Dehmel , Anatole France , Knut Hamsun , Arno Holz , Karl Kraus , Selma Lagerlöf , Adolf Loos , Heinrich Mann , Otto Nebel , Paul Scheerbart , René Schickele , August Stramm . In 1910, Oskar Kokoschka came to Berlin at Walden's suggestion and worked on the magazine. A large-format portrait of Walden, which Kokoschka painted in the same year, is now in the State Gallery in Stuttgart .

The storm gallery and other activities

In 1912 Walden and the Swede Nell Roslund married . In the following years he worked increasingly as a gallery owner. So he ran the Sturm Gallery, in which from 1912 pictures of the Blue Rider and Italian Futurism were on view. He discovered and promoted new talents such as Georg Schrimpf and Maria Uhden . 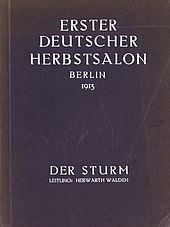 After the outbreak of war in 1914, Nell Walden worked thanks to her Scandinavian language skills for the "news office Der Sturm", which worked for various German intelligence services in the Nordic countries and in the Netherlands and formed the financial basis for the Sturm company during the war. For the later constructivist Thilo Maatsch , a visit to a Sturm exhibition in 1916 was the key event in turning to painting; his works were shown there in 1927.

In 1916, in the avant-garde spirit of the magazine Der Sturm , Walden founded the Sturm Art School and organized Sturm Evenings where Sturm artists presented their poems. The following year he opened a Sturm bookstore, which was followed in 1918 by the Sturm-Bühne and the magazine of the same name. They were intended to promote expressionist theatrical art.

In 1918 Walden became a member of the KPD . A year later he donated the Walden art collection to his wife. Herwarth Walden and Nell Roslund divorced in 1924 because she did not agree with his turn to communism. Two years later he married a Russian woman who died of tuberculosis in 1930.

In view of the rising National Socialism , he left Germany with the translator Ellen Bork in 1932 and went to Moscow , where they married. He worked there as a teacher and publicist. However, his sympathies for the avant-garde quickly aroused the suspicion of the Soviet government under Stalinism . In 1933 the daughter Sina Walden was born.

In 1941 Walden was imprisoned. His wife and daughter sought refuge at the German embassy and then returned to Berlin. Walden died on October 31, 1941 in a Soviet prison near Saratov. Sina Walden only received the determination of the time of his death in 1966 after a visit to Moscow.