Johannes Itten (born November 11, 1888 in Wachseldorn , Canton of Bern , Switzerland ; † March 25, 1967 in Zurich ) was a Swiss painter , art theorist , art teacher and teaching master at the Bauhaus in Weimar. Itten is one of the Zurich School of Concrete . He developed a theory of colors and is considered the founder of the theory of color types . 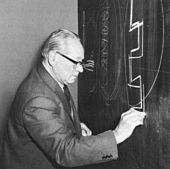 Johannes Itten was the son of a teacher and mountain farmer. His father died when he was four years old, and his brother three years later. Until he was ten years old, he lived through a tough everyday farming life with a strict stepfather, after which he came to an uncle in Thun and from 1904 attended the teachers' seminar in Hofwil in the canton of Bern. There he got to know the progressive ideas of reform pedagogy through the young seminar director Ernst Schneider . From 1908, Itten taught for a short time as a teacher in a Bernese village before studying at the art academy in Geneva from 1909 to 1910. He was disappointed with the academic teaching. He went back to Bern to be trained as a secondary teacher in physics, mathematics and chemistry from 1910 to 1912. In the winter semester of 1912/1913 Itten studied again at the art academy in Geneva. He took a course there with Eugène Gilliard (1861–1921), where he came into contact with the geometric form elements and their contrasts.

Itten lived in Stuttgart from 1913 to 1916 . He became a student of Adolf Hölzel at the Stuttgart Academy . There he came into contact with Ida Kerkovius , Oskar Schlemmer , Willi Baumeister and Hermann Stenner , all of whom were members of the Hölzel group. In 1914 he was represented with a work at the Stuttgart exhibition of the Association of Art Friends in the countries on the Rhine in the so-called "Expressionist Hall" that Hölzel had put together. At the eponymous exhibition "Hölzel und seine Kreis", which brought together teachers and students for the first time and which took place in Freiburg im Breisgau in 1916 and in Frankfurt am Main in 1917, Itten came up with several works and a fragmentary title , in particular problems such as "form artist" and " Means of representation “focussing catalog text in appearance. Decades later, in 1963, he was still fascinated by "Adolf Hölzel and his circle", whereby Hölzel was regarded as the "center and resting point in the complicated symbolic form". With a representative selection of works he was included in the 1961 exhibition of the Württembergischer Kunstverein Stuttgart "Hölzel and his circle" organized by Wolfgang Venzmer .

For Itten, Adolf Hölzel was pioneering as he adopted his general theory of contrast and consequently also his theory of color contrast, as well as the practice of image analysis, experimenting with abstract collages (material montages), gymnastic exercises and so-called automatic drawing .

During the First World War, Itten moved to Vienna , where he founded his own art school to secure a livelihood. He assessed his artistic work and his educational work:

“Geometric and rhythmic forms, problems of proportions and expressive image composition were worked through. The tasks with textures and working out the subjective forms were new. In addition to teaching about polar contrasts, the exercises to relax and concentrate the students brought amazing results. The creative automatism was recognized by me as one of the most important factors of artistic creation. I myself worked on geometric-abstract pictures based on careful picture constructions. "

In Vienna he met Walter Gropius , who appointed him in 1919 as one of the first teachers at the State Bauhaus in Weimar . Itten worked there from 1919 to 1923 as a teaching master ( master of form in several workshops) and shaped it through the preliminary course set up together with Gertrud Grunow . He was also a temporary lecturer in wall and glass painting.

After differences of opinion with Walter Gropius, Itten left the Bauhaus in 1923 to join the Mazdaznan temple community in Herrliberg near Zurich from 1923 to 1926 . There he founded the "Ontos Art School" for nature studies, composition, form and color theory and graphics as well as the "Ontos workshops" for hand weaving , Smyrna carpet weaving and tapestries .

From 1926 to 1934 Itten ran his own school in Berlin, where Max Debus, Fred Forbát , Friedrich Köhn , Lucia Moholy-Nagy , Georg Muche , Julius Pap and the photographer Umbo taught in 1929 . From 1932 to 1938 he headed the higher technical school for textile surface art in Krefeld . He also worked as a guest lecturer at the Stettin School of Applied Arts (also: Werkschule für Gestaltende Arbeit) and, together with its director Gregor Rosenbauer, was the initiator of the artist group Das Neue Pommern, which existed from 1930 to 1933 . The shop and the interior fittings at the Erich Hamann chocolate factory in Berlin-Wilmersdorf were designed by him in 1928.

In 1934 the National Socialists initially closed Itten's Berlin school, but in Krefeld he was fired in 1937. He first went to the Netherlands. Shortly before his planned onward journey to the USA, he was offered a position at the Zurich School of Applied Arts and was its director from December 1938 to April 1954. From 1943 he headed the textile school and from 1952 to 1956 the Rietberg Museum . From August 1953, Itten taught the first 21 students at the newly founded Ulm School of Design .

Itten's teaching methods are shaped by his own experiences as an artistic gymnast, in that he applied the principles of training theory to the learning of skills, as he was convinced of the educational function of sport.

Johannes Itten and his wife Anneliese had two sons and a daughter, the prehistorian Marion Lichardus-Itten . She is President of the Johannes Itten Foundation. The foundation, which was established by Anneliese Itten in 1992, is based at the Kunstmuseum Bern and serves to preserve, research and publish Itten's work.

Through his teaching activities and working with students at the Bauhaus, Johannes Itten became the founder of color type theory . In addition to his teaching activities as a painter at the Bauhaus Weimar, Itten also conducted research into the effects of colors. As a painter, he was interested in the interaction of form and color. Both the assignment of colors to shapes and the reverse behavior brought him further knowledge when working with his students, which was incorporated into his theory.

Johannes Itten set up a theory of colors (main work: Art of Color , 1961). The theory of the " seven color contrasts " originally developed by his teacher Adolf Hölzel and later worked out by Itten is taught at various arts and crafts colleges. An important preparatory work on the art of color (1961) was the preliminary course "Analyzes of old masters". It was published together with the “Color Ball in 12 Tones and 7 Light Levels” in the publication “Utopia” in Weimar in 1921.

Itten was one of the best-known followers of Mazdaznan , a mixed doctrine of Zoroastrian , Christian and Hindu elements founded by Otoman Zar-Adusht Ha'nish . Itten designed a quote as his contribution to the first Bauhaus portfolio:

"House of the White Man: Greetings and salvation to the hearts that are enlightened by the light of love and are not misled by hopes for heaven or by fear of hell."

In 2011, a planned street in Munich was to be named after him, but this was reversed in 2012 after protests about the Mazdaznan's proximity to National Socialism.

He found his final resting place in the Hönggerberg cemetery .

to person and work

Works on the web