László Moholy-Nagy ( IPA : [Laslo mohojˌnɒɟ] ) (* 20th July 1895 in Bácsborsód , Austria-Hungary ; † 24. November 1946 in Chicago ), originally: László Weisz , at the Bauhaus sometimes Germanized as Ladislaus Moholy-Nagy was, a Hungarian-American painter , photographer , typographer, and set designer . From 1923 to 1928 he was a teacher at the Bauhaus.

In 1923, Moholy-Nagy succeeded Johannes Itten as master of form in the metal workshop and head of the preliminary course at the Bauhaus in Weimar . He taught there and later in Dessau until 1928. Moholy-Nagy was one of the most important teachers at the Bauhaus; he was Walter Gropius' assistant and also dealt with typographic drafts and photography . From 1924 he was editor of the Bauhaus books in collaboration with Gropius .

After leaving the Bauhaus in 1928, he founded his own studio in Berlin and was his second marriage to the art historian and architecture critic Sibyl Moholy-Nagy , b. Pietzsch. In 1933 he began working with the advertising department of the Jenaer Glaswerk Schott & Gen , for which he created a completely new type of advertisement for the company's domestic glassware designed by Wilhelm Wagenfeld .

Since he was banned from working in Germany, he emigrated one year after Hitler came to power in 1934, first to Amsterdam , then to England (1935–1937) and later to the USA , where he founded the New Bauhaus in Chicago and, after its closure in 1938/1939, the successor institution School of Design founded and directed.

László Moholy-Nagy had two daughters with his second wife Sibyl. He died of leukemia in Chicago in November 1946 and was buried there in Graceland Cemetery . 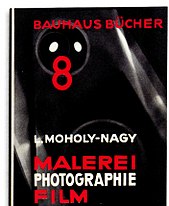 László Moholy-Nagy dealt with non-representational painting, influenced by Kazimir Malevich . In his Berlin studio he maintained contact with Kurt Schwitters , Theo van Doesburg , and Lazlar El Lissitzky . His work as a graphic designer was heavily influenced by the De Stijl movement, constructivism and Merz art .

In a creative and advisory capacity, he combined the aesthetic requirements of the Bauhaus with the conditions and mechanisms of product advertising. The Jena glass was the epitome of modern consumer culture. Moholy-Nagy created non-representational, constructivist sculptures, paintings, photographs and graphics. Moholy-Nagy was one of the most important photogram artists in the 1920s , he worked out the theoretical and experimental basis for the establishment of this then new art genre. He coined the term photoplastic as an expression for artistic photographic work that results from the combination and interlinking of various graphic and other design elements with photographic work. Working with light and its refraction, fixation and reflection shaped his interest in the new technical media photography and film. In 1925 his programmatic considerations appeared in the series of the Bauhaus books under the title Painting, Photography, Film .

Furthermore, he created with other artists of the Bauhaus, u. a. Herbert Bayer , the first German lifestyle magazine, the new line .

His work as a director is relatively unknown. He made some silent films, but also the sound documentary Lobsters . The titles of his films are Lichtspiel Schwarz Weiss Grau (1930), Marseille Vieux Port (1929), Berlin Stilleben (1931), and Grossstadtzigeuner (1932). In the last three in particular, Moholy-Nagy manages to capture the mood and virtually depict the music visually. With a clear dramaturgy and, for the time, relatively unusually fast cuts and changing settings, for example, he makes the gypsy celebration appear extremely spontaneous and lively. The films are hard to come by in Germany because all rights are apparently with his descendants in the USA.

His phone pictures from the 1920s can be interpreted as an early work of media art .

László Moholy-Nagy’s eldest daughter, Hattula Moholy-Nagy (* 1933), an archaeologist, founded the Moholy-Nagy Foundation together with her two sons in 2003, which looks after and manages her father’s estate. The foundation is based in Ann Arbor , United States.

The Moholy-Nagy University for Handicrafts and Design in Budapest, which was originally founded in 1880, is named after László Moholy-Nagy .