Herbert Bayer was born in April 1900 as the second of four children to Maximilian Bayer and his wife Rosa. Simmern was born in Haag am Hausruck. The father was a tax officer. Bayer is said to have been an artist since he was a child. The father died of consumption in 1917. Bayer attended the secondary school in Linz until 1917. After working for the Upper Austrian Railway Directorate, he did 18 months of military service.

After an apprenticeship in an arts and crafts studio with the architect Georg Schmidhammer and a job with the architect Emanuel Josef Margold in Darmstadt , Bayer studied at the state Bauhaus in Weimar from 1921 to 1925 . Here he attended Johannes Itten's preliminary course and later attended Paul Klee's lessons . In 1922/1923 and 1924/1925 he learned in the workshop for wall painting at the Bauhaus under Wassily Kandinsky . He designed the font for the cover for the Bauhaus Manifesto Staatliches Bauhaus in Weimar 1919-1923 . After the journeyman's examination in 1925, Bayer was appointed head of the newly established workshop for printing and advertising at the Bauhaus in Dessau . He introduced the standardization of all printed matter according to DIN at the Bauhaus and implemented lower-case letters. All of the printed matter required by the Bauhaus for its own use was produced in the printing and advertising workshop based on designs by Herbert Bayer or students. This created the basis for a new professional field: graphic design .

In 1928 Bayer left the Bauhaus and moved to Berlin to work as a commercial artist and artistic director of the Studio Dorland advertising agency . During his time in Berlin, Bayer also devoted himself to exhibition design, painting and photography and became the art director of Vogue magazine , Paris. He was considered a guest of the Ring new advertising designer founded by Kurt Schwitters in the same year .

After the transfer of power to the National Socialists in 1933, Herbert Bayer and his colleagues also carried out orders for Nazi propaganda , especially in the exhibition sector . The National Socialists used the trade fair and exhibition system from the start as an information and propaganda tool that attracted the public. Over the years, the result has been a few, but effectively staged public exhibitions. The camera - exhibition for photography, printing and reproduction (November 4th – 19th, 1933), originally planned by the Deutscher Werkbund , but now taken on as patron by Goebbels, is considered to be groundbreaking for the Nazi exhibition system . Contemporaries perceived it as a "gigantic show". Bayer designed an exhibition catalog here for the first time for National Socialist clients. 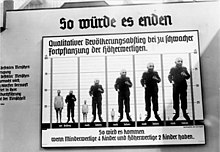 Part of the exhibition "The Miracle of Life", which propagates the National Socialist racial hygiene

The exhibition Deutsches Volk - Deutsche Arbeit from April 21 to June 3, 1934 was the first to go back to the National Socialists in the preliminary planning; The patron was President Paul von Hindenburg , the organizer was the non-profit Berlin Exhibition, Trade Fair and Tourism GmbH with the participation of national and state associations. Bayer again designed the catalog for the exhibition in its “ dorland studio ” in a modified Bauhaus style. Inside the catalog, he presented a mixture of high-tech show and rural-folk idyll with images of Aryan-blonde women and steely men, work scenes and industrial landscapes on 36 pages in characteristic typo-photo style. The Berlin exhibition Deutsches Volk - Deutsche Arbeit was followed by two more: The Miracle of Life (23 March – 5 May 1935) and on the occasion of the Summer Olympics in Germany (18 July – 16 August 1936); the three exhibitions together were referred to as a trilogy in the Nazi press. Until his emigration in 1938, Bayer worked for NS clients.

In 1937 his works were represented in the Nazi exhibition Degenerate Art in Munich. In the same year he traveled to the USA for the first time, where he emigrated the following year. The lifestyle magazine die neue linie , designed by him and Laszlo Moholy-Nagy , did not meet with the approval of NS clients. Together with Ise Gropius and Walter Gropius , Bayer designed the Bauhaus 1919–28 exhibition at the Museum of Modern Art in New York that same year . In 1946 he settled in Aspen / Colorado and began working as an architect, designer of large sculptures and landscapes. In Aspen, Bayer was one of the leading designers of the Aspen Institute buildings . He also worked as an artistic consultant for various companies and institutions. Among other things, he worked for the following companies: 1946 to 1965 for the Container Corporation of America (CCA) and 1966 to 1985 for the Atlantic Richfield Company (ARCO) in Los Angeles. In 1953 Bayer designed the World Geo-graphic Atlas for the CCA , which one reviewer considered in 1955 to be "the handsomest and best atlas ever published in America". In 1964 Herbert Bayer participated in documenta III in Kassel .

In 1968 Herbert Bayer was responsible for the design of the exhibition 50 Years of Bauhaus in Stuttgart .

Herbert Bayer was in his first marriage since November 1925 with the photographer Irene Bayer , geb. Hecht (1898–1991) married an American of Hungarian origin whom he met at the Bauhaus. From this marriage came their daughter Julia (1929–1963). Since the summer of 1930 at the latest, there was an extramarital relationship with Ise Gropius, which lasted until Ise Gropius emigrated to London. The couple had known each other from joint activities at the Bauhaus since 1925. He divorced Irene Bayer in 1944 and married Joella Haweis Levy, the ex-wife of a New York gallery owner, Julien Levy, in December 1944. Herbert Bayer died at the age of 85 in Montecito , California, where he had settled after a severe heart attack in 1974.

Other awards and honors include a. the honorary doctorate from the Graz University of Technology, the Austrian Cross of Honor for Science and Art , the Ambassador's Award for Excellence (London) or the 1969 Culture Prize of the German Society for Photography (Cologne).

During his teaching activities as head of the advertising workshop at the Bauhaus, Bayer developed a unicase alphabet. It reduced the capital letters (uppercase) and lowercase letters (lowercase) on only an alphabet. Bayer called the resulting sans serif script Universal .