Logo of the Bauhaus Archive, September 2011 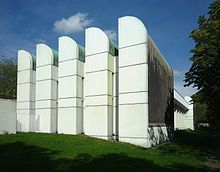 The Bauhaus-Archiv , Museum für Gestaltung in Berlin-Tiergarten collects works, documents and literature related to the Bauhaus and makes them accessible to the public. The collection is the most extensive of the Bauhaus school worldwide. The museum is expected to be closed until 2022 due to renovation work and has a temporary location in Berlin-Charlottenburg.

The Bauhaus Archive was founded in 1960 by Hans Maria Wingler in Darmstadt . Walter Gropius and other Bauhaus members supported the project. The collection grew quickly, people thought of having their own museum building and asked Gropius whether he would do the design for it. This is how the plans for a new museum on Darmstädter Rosenhöhe came about, but this could not be implemented in terms of local politics.

On one of his visits to Berlin, Gropius succeeded in getting the then Building Senator Rolf Schwedler interested in the Bauhaus archive . The Berlin Senate was ready to provide land and funds for the museum. In 1971 the Bauhaus Archive moved into temporary accommodation in Berlin. Gropius' employee Alexander Cvijanovic (at The Architects Collaborative - TAC), but also political decisions and financial bottlenecks, delayed the project because of the major changes to the building plans to adapt to the property on the Landwehr Canal . The foundation stone was not laid until 1976, and the new building was handed over in 1979. The striking silhouette of the shed roofs is reminiscent of Gropius' design from 1964 , beyond that there is not much in common. In 1997 the building was placed under monument protection. In 2005 it was used as an outdoor set for the films V for Vendetta and Æon Flux .

In 2014, the Bauhaus Archive had its own typeface developed, which is intended to give the building and all publications an unmistakable signature. It's called bayer next and was named after the Bauhaus student and teacher Herbert Bayer .

The collections document the history of the Bauhaus and show the results of its work in art, teaching, architecture and design . The inventory includes teaching results, workshop work, architectural plans and models, photographs, documents and a library.

The archive maintains an important collection of paintings, drawings and sculptures by the masters and students of the Bauhaus, including works by Feininger , Itten , Klee , Kandinsky , Moholy-Nagy and Schlemmer . The extensive graphic collection contains drawings, watercolors and prints, as well as examples from many artists of their work before or after the Bauhaus era. The inventory also includes commercial graphic works as well as materials from classes at the Bauhaus, i.e. from the various courses.

Since the foundation of the Bauhaus Archive, an important aspect of the work has been the collection of all documents relating to the activities and cultural ideas of the Bauhaus . Letters, manuscripts and pamphlets are collected . Walter Gropius made his private archive on the history of the Bauhaus available to the museum. The unparalleled richness of material forms the focus of the document collection.

At the end of 2013, the grand coalition agreed in its coalition agreement that the federal government would assume half of the estimated € 56.3 million cost of expanding the Bauhaus archive. The other half is borne by the state of Berlin, which has already entered this amount in the state budget.

In June 2015, the Senate Department for Urban Development and the Environment launched a restricted competition; On October 22, 2015, the jury recommended the design by Berlin architect Volker Staab for implementation. The museum has been closed since the end of April 2018 due to the renovation work. The temporary location "the temporary bauhaus-archiv" was opened at the end of June 2018 in Knesebeckstr. 1–2 opened.