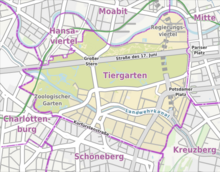 Overview map of the Tiergarten district

The Große Tiergarten , Berlin's second largest park after the Tempelhofer Park , takes up a considerable part of the Tiergarten district ; the Kleine Tiergarten, on the other hand, is located in the Moabit district. Tiergarten has 14,881 inhabitants (as of December 30, 2019).

The Tiergarten district (before 1920)

The areas outside the Berlin customs wall between the Great Tiergarten and the Spree were incorporated into Berlin in 1861. Since 1884 this area has been officially designated as the new Tiergarten district . The western part originally consisted of the "Schöneberger Wiesen", on which the Hansaviertel has been built since 1877 . On the Spreebogen further east there was originally a large parade ground. There the representative Königsplatz (today's Platz der Republik ) was built with the Victory Column , the Reichstag building and the Kroll Opera House . The noble Alsenviertel with the Swiss Embassy was built on the northern edge of the Spreebogen . In 1910 the Tiergarten district had 24,717 inhabitants.

In 1920 the new district of Tiergarten was formed from the Berlin districts of Tiergarten, Moabit, Untere Friedrichsvorstadt and Schöneberger Vorstadt . In 1938 the area south of Kurfürstenstraße was assigned to the Schöneberg district ; at the same time the Martinikenfelde , which had previously belonged to Charlottenburg, came to Tiergarten.

Federal Chancellery viewed from the Moltkebrücke , the Reichstag building in the back left

The buildings south of the Spree and north of the Landwehr Canal were almost completely destroyed in the Second World War . In the Alsenviertel, north of the Reichstag building, numerous buildings had already been demolished in the course of Hitler's "Germania" plans and many embassies had been relocated to the southern Tiergarten . Originally the Great Hall was to be built here . World War II put an end to these plans. During the division of Berlin , the site lay fallow . After the political change and the move of the federal government to Berlin, the former Alsenviertel became part of the new government district and several large-scale new buildings were built for the institutions of the federal government. The only remaining building from the time before the First World War is the Swiss Embassy , which today stands like a memorial in an open area on the edge of the Spreebogenpark , which was created in 2005 .

Serious destruction also occurred in the Tiergartenviertel , a villa colony from the first half of the 19th century, west of Potsdamer Platz . As in the Alsenviertel, several villas had already been demolished before the war to make room for Hitler's new building plans. Numerous Jewish owners had previously been expropriated and driven from their homes. A few buildings in the district survived the Second World War, such as St. Matthew's Church , some historic embassy buildings and the Bendlerblock , today's Federal Ministry of Defense . Due to the division of Berlin, many of the historic cultural cities were separated from West Berlin in the political east of the city . As a result, the Kulturforum was built on the area of ​​the former Tiergartenviertel from 1958 as the new cultural center of the western part of Berlin. 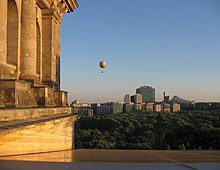 The Potsdamer Platz from the Reichstag considered the Great Tiergarten between

Potsdamer Platz, one of the liveliest squares in Europe with numerous restaurants, hotels and variety theaters in the Roaring Twenties , was also in ruins after the Second World War and then became a border area in the divided city due to its close proximity to the Berlin Wall . It was only after the fall of the Berlin Wall in the 1990s that new buildings were planned according to plan, in line with the old tradition.

The Hansaviertel on the northern edge of the Tiergarten was also badly affected by the Allied bombardment and was rebuilt by the most renowned architects as part of the Interbau International Building Exhibition in 1957.

In Moabit and south of the Landwehr Canal, on the other hand, large parts of the old buildings were preserved despite severe war damage.

The Tiergarten district (since 2001)

In the Spreebogen south of the Spreebogenpark there are important parliament and government buildings of the Federal Republic of Germany .

The German Bundestag meets in the Reichstag building on Platz der Republik and the neighboring Paul-Löbe-Haus and Marie-Elisabeth-Lüders-Haus also serve as parliament buildings.

The Chancellor is working with his staff in 2001 completed Federal Chancellery . From here, accessible via a bridge lies beyond the Spree the Registrar garden with the adjacent Federal Department of the Interior .

The free-standing embassy of Switzerland and the German Parliamentary Society (DPG) are located in the vicinity of the Federal Chancellery in the historic Reichstag Presidential Palace .

Philharmonic in the Kulturforum

The Tiergarten district, near Potsdamer Platz, is home to the Kulturforum Berlin with the Gemäldegalerie , the Kupferstichkabinett , the Museum of Musical Instruments , the New National Gallery , the Philharmonic , the Chamber Music Hall (also known as the "Small Philharmonic") and the St. Matthew Church as well as the State Library .

South of the Großer Tiergarten, on the southern edge of the district, there is Kurfürstenstrasse , which, together with the Bahnhof Zoo (which is in the Charlottenburg district), became known as the setting for the filmed story about the heroin scene , Christiane F. - We children from Bahnhof Zoo . The scene stayed in front of the Zoo station during the day and moved to Kurfürstenstrasse in the evening, where not only prostitution took place at the underground station of the same name , but also intensive heroin trafficking on the street and in nearby apartments, even decades after this film. The zoological garden adjacent to the train station and the aquarium are also located in the Tiergarten district.

Bellevue Palace on the northern edge of the Großer Tiergarten , today the official seat of the German Federal President

The congress hall , which houses the House of World Cultures , was a gift from the USA to West Berliners in 1957 . After part of the overhanging prestressed concrete roof structure fell down in 1980 and killed a journalist, it was rebuilt with improved statics .

The Tempodrom next to the congress hall - a circus tent in which rock concerts were held - was originally located on Potsdamer Platz right next to the Berlin Wall and was an institution in Berlin's cultural landscape for decades. It had to give way to the security needs of the Federal Chancellery and was erected in a solid form on the site of the former Anhalter Bahnhof in the Kreuzberg district . The area on which the Tempodrom stood is now the tipi - the tent at the Chancellery.

In addition, the following sights are located in Tiergarten: the Bauhaus Archive , the Bendler Block as the official seat of the Federal Ministry of Defense , the German Resistance Memorial , Bellevue Palace with the Office of the Federal President , the Konrad-Adenauer-Haus (federal headquarters of the CDU ), the Victory Column on the Großer Stern as well as the zoo tunnel .

The Berlin Marathon has started in the Großer Tiergarten since 1987 , and part of the route of the Love Parade also ran through the Großer Tiergarten from 1996 to 2003. A particular attraction was the fan mile on Straße des 17. Juni during the 2006 World Cup and the 2008 European Football Championship .

Panoramic view from the Victory Column to the Great Tiergarten , starting on the left and looking east

The embassy district is located in the western part of the Tiergartenviertel between the Great Tiergarten in the north, the zoological garden in the west and the Landwehr Canal in the south . Some states already had their diplomatic representation there during the time of the German Reich, and further new buildings were planned. Due to the destruction during the Second World War and the subsequent division of Germany , this West Berlin district lost its importance and was to be redesigned through residential developments and an expansion of the zoo. After German reunification and the “ capital city resolution ”, the quarter once again found importance as an embassy quarter.

For the five Nordic countries Denmark, Iceland, Norway, Sweden and Finland, the opportunity arose for the first time to implement the idea of ​​a common embassy system, which has already been considered more often. The Nordic embassies are five national embassy offices with a common public building. 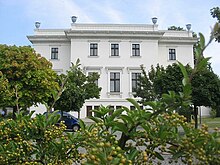 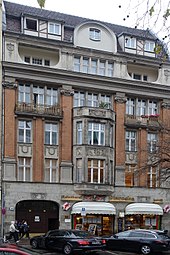 As a child, Marlene Dietrich temporarily lived at Potsdamer Strasse 116

Districts of Berlin in the Mitte district