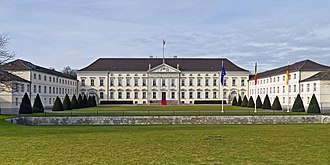 The Bellevue Palace [ bɛlvyː ] ( French for Beautiful View is) a monument on Spreeweg 1 in Berlin district of Tiergarten . It is located on the northern edge of the Great Zoo between the Spree and the Victory Column . The classicist three-wing complex was built by Michael Philipp Boumann in 1785–1786 as a summer residence for the Prussian Prince August Ferdinand and has been rebuilt several times over the course of history. After severe damage in World War II , the castle was rebuilt true to the original in 1954–1959. Since 1994 it has served as the first official seat of the German Federal President .

Bellevue Palace from the garden side , painting by Eduard Gaertner , 1847

The palace was commissioned by Friedrich II's youngest brother , Ferdinand von Prussia , to be built from 1785 to 1786 according to plans by Michael Philipp Boumann . Georg Wenzeslaus von Knobelsdorff was one of the numerous previous landowners , who built a summer residence in 1746 about south of today's castle. Boumann had to incorporate an existing building, a leather factory converted into a residential building on the banks of the Spree, into the new building as the right wing.

The castle was built as a three-wing complex, consisting of the elongated, two-and-a-half-story main building and the two two-story side wings (left women's wing , right Spree wing ) in the early classicist style. The total of 19 window axes of the middle wing is structured by a three-axis central projection with a figure-crowned triangular gable, which rests on four pilasters in the Corinthian style.

The palace owes its name Bellevue to the view from the Corps de Logis , the residential wing, to the west, which stretched far across the park and the meandering Spree to the dome of Charlottenburg Palace . Since the 1880s it has met the viaduct of the Berlin Stadtbahn after 400 meters .

The interior of the castle was redesigned repeatedly. Just three years after its completion, Carl Gotthard Langhans built one of his famous oval halls. Today this is the only room in the castle that has largely been preserved in its original form. In 1938, a reorganization was carried out to the guest house of the national government by Paul Otto August Baumgarten . The two entrances , which are now recognizable as vaulted windows on the side elevations, were walled up and the current central entrance and staircase were created. An L-shaped extension, the so-called ministerial wing, was added to the left side wing. Knobelsdorff's dairy had to give way to modern farm buildings. The replacement building erected in the park was inhabited by the actor, director and general manager of the Prussian State Theater Gustaf Gründgens until it was destroyed in the war .

Already hit by fire bombs in an Allied air raid in April 1941 and burned out, the palace was initially secured in a makeshift manner after the end of World War II and rebuilt from 1954 to 1959 by the architect Carl-Heinz Schwennicke as the Berlin office of the Federal President, with the exception of the Ministerial Wing. From a West German perspective, an official seat was possible despite the city's four-power status according to Article 23 of the Basic Law . Only the ballroom on the upper floor of the palace, designed by the architect Carl Gotthard Langhans in 1791, has survived from the time it was built. The renovation in the style of the 1950s was derided as a “mixture of film star sanatorium and ice cream parlor” because of its ahistorical additions and conversions , and has largely given way to numerous other renovations.

The castle was renovated in 1986/1987 and restored according to plans from the time before the destruction. From the mid-1990s onwards, technical breakdowns such as failing electricity or water, a stalled elevator or poor air conditioning in summer increased, so that Federal President Roman Herzog described the castle as a “dump”. Therefore, in 2004/2005, a renovation and fundamental renewal of the technical equipment was carried out. The representative rooms are also evident after this recent renovation in the style of the 1980s, in which a careful approach to old forms of decoration was attempted with partly new materials. For preservation reasons, two are salons with dark paneled interior received the 1950s.

The former living quarters in Bellevue Palace have been converted into an office wing for the president, so that the heads of state have no longer been able to live in the palace, but instead use a service villa in Berlin-Dahlem .

Castle portal with the Bundeswehr guard of honor

Office of the Federal President on the ground floor, on the wall the painting The Weimar Musenhof by Theobald von Oer , 1860

Historical Langhanssaal on the upper floor

Ferdinand used it as a princely pleasure palace and royal country residence until his death in 1813 . After that, his son, Prince August of Prussia , the chief and reformer of the Prussian artillery, lived there. By inheritance it fell to King Friedrich Wilhelm IV in 1843 , who had the first museum for contemporary art in Prussia set up in a wing on the ground floor in 1844 - this Patriotic Gallery was the predecessor of the National Gallery . After they moved out in 1865, the palace was used again by the court until 1918, partly as a residence for members of the royal family, partly as a guest house; Kaiser Wilhelm II had his children given private lessons here.

The upkeep of the court was an expensive and labor-intensive affair, as a look at the court of the Bellevue Palace in 1870 shows:

During the First World War , the palace was used as a meeting place for the Supreme Army Command , the government and the Central Powers allied with Germany ( Austria-Hungary , Ottoman Empire , Bulgaria ) from 1916 onwards . General Erich Ludendorff was dismissed here, against his will, on October 26, 1918 by the then head of state and last German emperor, without agreeing to any other use that would be usual for soldiers. According to the historian Manfred Nebelin , the event in Bellevue Palace, 14 days before the fall of the emperor, marks the regaining of the primacy of politics over the military , which had been lost since the fall of Chancellor Bethmann-Hollweg .

After the First World War, the castle was initially empty. From 1929 on, it served as an office building, people's kitchen and exhibition hall. The side wings contained rental apartments until the State Museum for German Folklore was housed there in 1935 . After the renovation in 1938, however, the castle only served as a guest house once until the beginning of the Second World War . In 1939, the Reich Minister and Head of the Presidential Chancellery, Otto Meissner , moved into the palace as a new residence and apartment after he had to give up his previous premises in the Reich President's Palace to Reich Foreign Minister Joachim von Ribbentrop .

From 1957 the palace served next to the Villa Hammerschmidt in Bonn as the second and Berlin official residence of the Federal President, who only used it occasionally, for example for concerts. On June 18, 1959, Theodor Heuss officially took over the building.

In 1991, the Berlin police handed over the guarding of the palace to the then Federal Border Police (today: Federal Police ).

The then Federal President Richard von Weizsäcker moved the first official residence here in 1994. From 1996 to 1998 the Federal President's Office was built in the immediate vicinity according to plans by the architects Gruber + Kleine-Kraneburg . Roman Herzog was the only Federal President who lived in the castle himself (1994–1999).

Standard of the Federal President

The standard of the Federal President usually blows on the roof of the castle, it is only brought in in three cases: