The Steglitz manor , also known as Wrangelschlösschen , is a country house built between 1795 and 1808 in the classical style in the Berlin district of Steglitz in the Steglitz-Zehlendorf district . The building, erected as a mansion , has the address Schloßstraße  48 and houses the Schlosspark Theater and a cinema in an outbuilding . It is one of the last surviving buildings from Prussian early classicism and has been a listed building since 1923 .

The Steglitz manor was built as a representative building in the center of the old village of Steglitz in two construction phases. It stands at the south-western end of Steglitzer Schloßstraße (house number 48), a well-known and popular shopping street in the district and gave it its name. It is right next to a large, busy intersection with a junction to the 103 motorway .

Late 18th century had King Friedrich Wilhelm II. Gave the order, the Berlin-Potsdamer Chaussee to create a paved Art Street , the first modern highway in the Kingdom of Prussia applies. The street later known as the Provinzialchaussee Berlin- Potsdam passed the village center of Steglitz and made a distinctive bend at the height of today's Wrangelstraße. There David Gilly had a first manor built on the courtyard of an old manor in the years 1795-1801. Carried out up to the shell construction, Cabinet Councilor Carl Friedrich von Beyme , who later became Grand Chancellor and Minister of Justice, acquired the property and completed the manor house by 1808 under the direction of Heinrich Gentz . In particular, the ground floor was changed from the original plans.

In April 1871, the municipality renamed the Provinzialchaussee to Schloßstraße, with the southern part of the Steglitz manor still bearing the name Lichterfelder Chaussee . Since the nationwide numbering of the trunk roads in 1932 (from 1934 Reichsstraßen ), Schloßstraße was part of Reichsstraße 1 and later of Bundesstraße 1 .

Because of its builder and owner, the manor house was given the nickname Beyme-Schlösschen . Beyme was known for giving land to his farmers. After his death in 1838, Beyme's daughter, Charlotte von Gerlach (1792–1870), sold the estate to the state. The land was divided into plots , sold to those willing to build from 1848 and gradually built on. The manor was owned by the state, which it offered deserved figures to use as a residence: Major General Friedrich Wilhelm von Rauch , Lieutenant General Friedrich Graf von Brühl and 1853, Field Marshal Friedrich Heinrich Ernst Graf von Wrangel , who at the defeat of the German Revolution 1848/1849 involved was. Wrangel often made a summer stay in the manor house in Steglitz, which is still in fiscal possession. Although the building was a mansion, the vernacular called it a castle due to its beautiful appearance , which resulted in the nickname Wrangelschlösschen . An adjacent street was named Wrangelstrasse around 1880 .

The state sold the building after Wrangel's death (1877). Over the decades, the changing owners had various extensions and conversions made according to the requirements for the use of the house. This included setting up lodging rooms on the upper floor and converting the attic into apartments. Among other things, a balcony was added over the eastern main entrance in 1880 and in 1904 a winter garden was built as a western half-timbered extension.

In 1920, the Haack heirs were shown as owners in the Berlin address book . The Schlosspark Theater has been housed in the former service wing since 1921 . The building was listed as a historical monument as early as 1923 .

After the Second World War , the US occupation forces used the building. They left the castle to an officers' club rebuild (Lightning Lounge) including a use as a hotel and restaurant.

In 1958, the state of Berlin acquired the building ensemble from the Americans. The administration has since been carried out by the local district office. 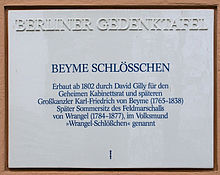 Berlin memorial plaque on the house at Schloßstraße 48

From 1992 to 1995, the manor house was restored in accordance with a historic monument at a cost of around 16 million marks (adjusted for purchasing power in today's currency: around 11.47 million euros). During this work, the construction management oriented itself as far as possible on the construction plans of Gilly, extensions and conversions were removed.

Memorial plaque on the house at Schloßstraße 48

The monument protection owes essential knowledge about the construction history of the building to the renovation work with extensive construction studies and restoration work.

The palace-like manor house is 29.9 m long, 15 m wide (including the front and rear entrances 22 m) and is a two-wing plastered building with two floors. The floors are visually separated by a meandering frieze , the building is closed off by a flat hipped roof. The central risalit on the side facing away from the street is formed by a portico with Greek-Doric columns and by lattice-structured arched windows . The risalit jumps back to the veranda at the height of the eaves, in the roof area above there are three arched windows. On Schloßstraße, a glare field accentuates the central structural axis. The middle area of ​​the house shows the typical sequence of a palace: a vestibule with stairs and a round garden room.

A former farm building is attached to the manor house, which was converted into a small theater called Schlosspark Theater in the 1920s and is now operated by Dieter Hallervorden . The portico of the theater part was built in 1920/1921 according to plans by the architect Hans Heinrich Müller . There is also a cinema in the garden of the complex .