Steglitz-Zehlendorf is the sixth administrative district of Berlin and had 310,071 inhabitants as of December 31, 2019.

The district in the southwest of Berlin was created in 2001 as part of the Berlin administrative reform by merging the former districts of Steglitz and Zehlendorf .

Steglitz-Zehlendorf is considered a relatively wealthy residential area with a favorable social structure . Most of Berlin's income millionaires live in the area.

The university and research landscape in the district is internationally renowned and is a magnet for scientists from all over the world. The main cultural centers include a. the Berlin Literary Colloquium , the Botanical Garden , the Brücke Museum and the Titania Palace .

Steglitz-Zehlendorf borders the Brandenburg state capital Potsdam in the west , as well as the Berlin districts of Spandau (northwest), Charlottenburg-Wilmersdorf (north) and Tempelhof-Schöneberg in the east. Kleinmachnow and Teltow in the Potsdam-Mittelmark district lie behind the state border in the south . The district extends over 19 kilometers in an east-west direction and 9 kilometers in a north-south direction.

The westernmost point of Berlin is in the district of Wannsee in the Havel , on which the border with Brandenburg runs.

The Steglitz-Zehlendorf district includes extensive recreational areas, villa settlements and various residential and commercial locations. In the west there are recreational areas such as the Wannsee , the southern Grunewald with its Krumme Lanke and Schlachtensee lakes , which are particularly popular with Berliners in summer. The district of Dahlem is the seat of numerous scientific institutions and the Free University . The Zehlendorf area has different residential areas, with a small retail area in the center. The Lichterfelde, located south of Dahlem, is characterized in the northern part by the Gründerzeit villa colony of Lichterfelde and smaller retail centers; in Lichterfelde-Süd there are partly residential areas from the time after the Second World War .

The Steglitz district further to the east, on the other hand, has a more urban structure, as shown by Schloßstraße in the center with the highest density of shops in Berlin. It represents the main center for the south-western districts of the city. Botanical Garden and Botanical Museum Berlin-Dahlem are, contrary to their own name, in the district of Lichterfelde.

The district is populated very differently. Half of the population lives in Steglitz and Lichterfelde, both of which are in the top quarter of all 96 Berlin districts in terms of population. Wannsee, the largest district of Steglitz-Zehlendorf with almost a quarter of the total area, is very sparsely populated with its three percent population.

The beer brush in Steglitz

The former districts of Steglitz and Zehlendorf were formed in 1920 during the formation of Greater Berlin from previously independent rural communities and manor districts of the Teltow district.

The entire area of today's district belonged to the Second World War from 1945 to 1990 along with the districts of Tempelhof , Schöneberg , Neukölln and Kreuzberg the American Sector of Berlin , see. also →  divided city (there light blue area).

In 2001, the two formerly independent districts were merged to form the Steglitz-Zehlendorf district as part of the Berlin administrative reform . 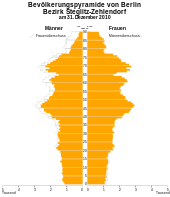 Population pyramid of the Steglitz-Zehlendorf district 2010

As of December 31, 2019, the Steglitz-Zehlendorf district had 310,071 inhabitants. Due to the proportion of water and forest areas in the total area of ​​almost 103 square kilometers as well as the mostly loosened development, the average population density on the reference date was 3,025 inhabitants per square kilometer. See also: List of districts and districts of Berlin .

In the Berlin district comparison, Steglitz-Zehlendorf is characterized by a relatively high household income of the residents and the lowest city-wide unemployment rate of 5.4% (as of November 2019). The average age of the population was 46.2 years (as of December 31, 2016), the highest of all Berlin districts, making Steglitz-Zehlendorf the district with the oldest inhabitants on average (for comparison: the Friedrichshain-Kreuzberg district has 37.8 years the youngest population).

Visitors to the Wannsee lido

The district of Steglitz-Zehlendorf is one of the areas with the lowest birth rate in Berlin and Germany. Statistically, only 8.4 children were born for every 1000 inhabitants in 2017. The aging of the population, which has been caused by the above-average childlessness for decades, leads to a decreasing willingness to innovate, declining employment and decreasing productivity.

In 2015, of the 30,015 craft firms represented in Berlin, a total of 2,276 were registered in the Steglitz-Zehlendorf district.

Schloßstraße , in the background the Steglitz roundabout

An important business and shopping center for the southwestern district of Steglitz-Zehlendorf is the Steglitzer Schloßstraße . With over 200,000 m² of retail space, it is one of the largest retail locations in Berlin. In addition to the four large shopping centers Forum Steglitz , Das Schloss , Schloss-Straßen-Center and Boulevard Berlin , there are numerous shops there, some of which are multi-storey. There are a variety of dining options in the side streets.

The largest commercial area in the district covers around 77  hectares and is located around Goerzallee, Beeskowdamm and Am Stichkanal. Over 280 companies are based there and employ around 3500 people.

The FUBIC start-up center is currently under construction (as of 2020). Rooms for innovative graduates of Freie Universität are being created on the former site of a US military hospital.

The motorways A 100 , A 103 , A 115 and the federal road 1 run through the Steglitz-Zehlendorf district. The Glienicke Bridge is part of the B 1 and connects Berlin with Potsdam .

The S-Bahn lines S1, S2, S25 and S7 and the underground lines U3 and U9 run through the district . There are also numerous bus routes including night routes in the district.

The Lichterfelde thermal power station was first put into operation in 1972 and works on the principle of combined heat and power . Today's gas power plant with its 158 meter high chimneys has three blocks and has a total electrical output of 450  MW and a thermal output of 720 MW.

Since 2006, the CDU and the Greens have formed a counting community in the District Assembly (BVV).

The Steglitz-Zehlendorf district is represented on the state level in the council of mayors .

→ Main article : Coat of arms of the Steglitz-Zehlendorf district

Blazon : In gold, a green pine with a black trunk on a green ground, underneath a silver corrugated shield base, above in the shield head a floating red armored and tongued black eagle head. A red three-tower wall crown rests on the shield , the central tower of which is covered with the Berlin coat of arms . 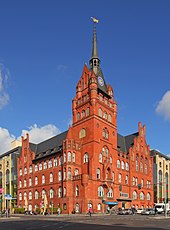 There is currently a citizens' office in the Steglitz town hall

In addition, the district has sponsored the 2nd Company of the Guard Battalion at the Federal Ministry of Defense and the Reservist Comradeship Berlin-Southwest "Flak Regiment 12" .

Directorate 4 of the Berlin State Police , based in the Lankwitz district, is responsible for the Steglitz-Zehlendorf and Tempelhof-Schöneberg districts. 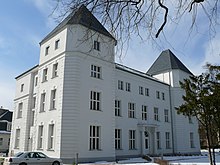 The Fritz Haber Institute of the Max Planck Society 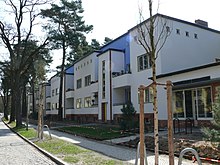 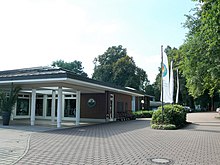 The Berlin-Wannsee Golf and Country Club

The Berlin HC was multiple German champions in women's and men's field hockey . The Bundesliga club plays its home games primarily in the Ernst Reuter Stadium in Zehlendorf. Among the successful players in the hockey division are some members of the Keller family. Erwin Keller won a silver medal in the Olympic Games. Carsten, Andreas and Natascha Keller each won a gold medal at the Olympic Games.

Various youth teams in the basketball department of TuS Lichterfelde Berlin were Berlin and German champions.

The football club FC Viktoria 1889 Berlin is one of the largest active football clubs in Berlin with around 1,600 playing members in 65 different teams.

The Kronprinzessinnenweg in Grunewald is a popular route for cycling and inline skating . The paved path in the forest is four kilometers long. 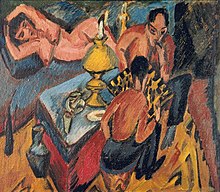 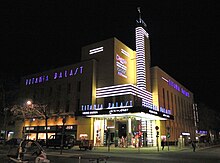 Titania palace
See also : List of cinemas in the Berlin district of Steglitz-Zehlendorf

Districts of Berlin in the Steglitz-Zehlendorf district