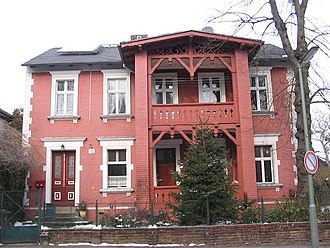 “ Kohlhasenbrück is the name of the bridge on the way from Zehlendorf to Nowawes , through the wood, on the old Potsdamer Landstrasse , about 1 ⁄ 2  mile behind Zehlendorf , which leads over the Telte or Böcke , after the one under the government Hans Kohlhase , made notorious by Elector Joachim II , who feuded the Elector of Saxony because of some horses stolen from him by Saxon nobles , and when his sovereign refused to give him the right to rebel against him, and his factors a number of silver cakes that came from the Mansfeld Mountains , which he sank into the water at this bridge. "

During the time of the division of Germany , the road over the Alsenbrücke on the Pohlesee or the Hubertusbrücke south of the Stölpchensee to the Böckmannbrücke over the Teltow Canal was the only navigable connection from West Berlin to Kohlhasenbrück. A connection over the Nathanbrücke only led to the Königsweg , an unpaved forest path to Zehlendorf . At that time, the only connection to the exclave Steinstücke , which belongs to West Berlin, led from Kohlhasenbrück , which initially only went over a forest path that began at the end of Machnower Straße along the Wetzlarer Bahn (so-called "Kanonenbahn"), which only became one after an area swap in 1972 fixed road connection was expanded. East of the connecting road to the vast forests close in the conservation area Parforceheide with their characteristic high proportion of the Mark pines to that on the clayey and sandy dry soils of Teltow good thrives.

As the name suggests, there was originally a bridge here. At the time, this led via the Bäke , which at the beginning of the 20th century largely merged into the Teltow Canal, which was drawn through the Teltow as a connection between the Havel and the Spree over the Dahme from 1900 to 1906 . According to Gerhard Schlimpert, the earliest mention of a Kohlhasen bridge goes back to 1599 with the entry that a certain Hans Kohlhase had "a number of silver cakes in 1539 in retaliation for an injustice he had suffered" half a mile from Potsdam under a bridge that is still today Kohlhasen Bridge means sunk into the water ”.

The silver cake (a lentil-like silver bar for further processing in the Electoral Mint ; later also called Planchen ) was captured by the former Cölln merchant Hans Kohlhase in an attack on a transport belonging to Elector Joachim II , but he did not keep it.
After his campaign of revenge had previously been directed exclusively against Saxony and the Brandenburg Hohenzollern therefore let him go, he had overstepped the curve with this attack on his own soil. On March 22, 1540, he was together with his companion Georg Nagel Schmidt before the Berlin Georgentor whacked .

In 1808 , the writer Heinrich von Kleist erected a literary monument to the rebel under the name Michael Kohlhaas . About three kilometers northeast of the Kohlhasen Bridge (today's Böckmannbrücke) lies the grave of Kleist on the Kleiner Wannsee , who shot his cancer-stricken companion Henriette Vogel and himself nearby in 1811 .

Commemorative plaque on the Kohlhas oak

Shortly after the crossing of Königsweg and Bäkestrasse there was an oak that a historically interested innkeeper planted on September 2, 1873 and that carried a metal plaque from 1913 with the inscription:

"Kohlhas Oak - planted on Sedan day in 1873, in place of the received originating from the 15th century old oak Kohlhas"

The new Kohlhas Memorial Oak was freshly trimmed in 2005, with a circumference of around one and a half meters and a height of around 18 meters, it is still quite impressive. However, it did not come close to its predecessor, which is said to have been around 1000 years old with a trunk circumference of over four meters and who was struck by lightning in 1870. The oak that was newly planted by the innkeeper Heinrich Beyer was intended to commemorate Kohlhas and also the victory at Sedan in the Franco-German War , which is why the plaque was installed on Sedan Day in 1913.

Finds of corresponding pile remains on a neighboring property suggest that the old Kohlhasen Bridge led over the Bäke close to the location of the oak. Today's Böckmann Bridge over the Teltow Canal is around three hundred meters to the northwest.

Kohlhasenbrück played an important role in the expansion of the traffic infrastructure in the greater Berlin area. The first railway line between Berlin and Potsdam (" Stammbahn "), which was ceremoniously opened on October 29, 1838, led directly past the place. The four to five trains that rolled over this route every day in 40 minutes stopped in Neubabelsberg - today Griebnitzsee - (also in Machnower Heide , Zehlendorf and Steglitz ). This line has been out of service since the end of the war in 1945.

Even today, however, there are railway lines running through the town: the S-Bahn from Wannsee to Potsdam, opened in 1874, and the so-called “Kanonenbahn” ( Wetzlar Railway ), on which regional traffic between Berlin and Potsdam also runs. The S-Bahn and regional train station Griebnitzsee is just under a kilometer west of Kohlhasenbrück and is already part of Potsdam-Babelsberg . In 1946 there was an independent - albeit provisional - S-Bahn station Kohlhasenbrück for a short time because the S-Bahn bridge over the Teltow Canal was destroyed.

A small and boggy area at the end of the former and mostly swampy Bäketal has been designated as a nature reserve (NSG) since 1988 ; it lies between the Neue Kreisstraße and the banks of the Teltow Canal and Griebnitzsee. In § 3, the ordinance on the Bäkewiese nature reserve of December 16, 1988 introduces the following 'protection purpose': “The designated area is protected in order to be one of the last original relics of the Bäkeflie natural area with communities and habitats of wild flora and fauna In particular, alluvial and bog soils are to be “preserved in their natural sequence of layers and dynamics”, the culturally valuable landscape , which is characterized by broken and alluvial forest areas as well as wet and damp meadows , is to be saved.

The protection and maintenance measures in the Bäkewiese NSG have, among other things, led to the fact that the cormorant colony of the Imchen NSG near Kladow is relocated to the Bäkewiese NSG when the Havel is frozen. The formerly around 200 posts near the NSG to protect the reed belt of the Griebnitzsee are largely occupied by the large, heavily built birds. The two photos of the NSG Bäkewiese were taken from the riverside park in Potsdam . Due to the inflow from the Teltow Canal with cooling water, the Griebnitzsee remains ice-free as the last body of water.

In January 2008, the real estate investor Stofanel began construction work for the construction of 33 city villas directly on the Bäkewiese nature reserve. The impact on the local fauna remained small. Even after the development, there are breeding settlements by cranes . In the narrow breeding area or in the feeding area, in addition to the great spotted woodpecker , the middle woodpecker , green woodpecker and black woodpecker can be found. Among the mammals, wild boar , raccoon and fox , which use the protected zone as a daily entry, exert strong predation pressure on ground dwellers. Green frogs and common toads dominate the amphibians in the permanent pool.