The Johannisthal waterworks ( pronunciation ? / I ) is a 35 hectare nature reserve in the Treptow-Köpenick district of Berlin . It is bordered in the north by the Königsheideweg , in the west by the Johannisthaler Chaussee, in the south by the federal motorway 113 and in the east by Springbornstrasse and Koschatweg. 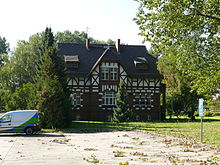 In 1901, a waterworks with two lifting pipes was put into operation on the area of ​​today's nature reserve , which took water from the Spree , the Dahme , the Britzer connecting canal and the Teltow canal with the help of a total of 26 extraction wells . Around 80 other wells were put into operation by the 1970s. With a delivery rate of 65,000 m³ per day, around 300,000 residents could be supplied with drinking water. After reunification , consumption fell significantly; In 2001, funding was completely discontinued. It is planned to resume drinking water production. For this, however, extensive remedial measures are required in the vicinity of the waterworks, since pollutants such as arsenic , cyanide and CHCs from contaminated sites were entered in the catchment area . The current function of the Johannisthal waterworks is therefore limited to guaranteeing the remediation of contaminated sites and maintaining an environmentally and settlement-friendly groundwater level. Furthermore, the water supply concept for Berlin identifies the Johannisthal waterworks as the location of the drinking water supply.