The Schloss Koepenick is located in the historic center of Berlin hamlet Koepenick .

Location of the Schlossinsel in Berlin

The castle is located opposite the Köpenick city center with the Köpenick town hall on an island in the Dahme , not far from its confluence with the Spree . The island is connected to the mainland by a bridge over the moat. In the immediate vicinity is the Long Bridge , which crosses the Dahme and connects the old town of Köpenick as well as the Castle Island and the Castle with the newer districts to the west and north-west and the center of Berlin .

The later castle island Köpenick was already settled in prehistoric times and is one of the earliest settlement areas in today's Berlin urban area , along with Spandau and the twin cities of Alt-Berlin / Cölln . Slavic ramparts were found here later , a Slavic castle was built in the 8th or 9th century. The Slav prince Jaxa von Köpenick ruled here in the 12th century. Several subsequent buildings followed, including a late medieval fort castle . Around 1245 the Ascanians conquered the castle island. The Slavs were resettled on the eastern bank of the Dahme, where they settled in a Kietz .

Köpenick Castle as a copper engraving by Merian around 1652 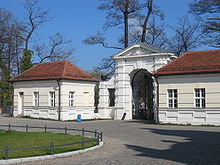 After the old buildings were demolished (probably around 1550), Elector Joachim II of Brandenburg ordered the construction of a hunting lodge in the Renaissance style in 1558 . It was equipped with two residential wings and two defensive walls. The builder Wilhelm Zacharias was responsible . Little has been said about this building; The size, arrangement and defensive strength, however, are likely to have been a little more powerful than the preserved Grunewald hunting lodge . Joachim died nearby in 1571 during a hunting expedition.

The palace was expanded for Prince Elector Friedrich (later Elector Friedrich III of Brandenburg, then King Friedrich I in Prussia) from 1677 onwards. As an architect here was Rutger Langer field , a native Dutchman from Nijmegen , responsible. The northern pavilion was built in 1679–1682. The architect Johann Arnold Nering followed van Langervelt in building the palace in 1684 and had the economic wing with the reformed palace church (consecrated on January 6, 1685) and the courtyard gate (1682) built. Friedrich later lived in the castle with his wife Elisabeth Henriette von Hessen-Kassel , who is said to have initiated the construction of the church.

In the following years the construction of a three-wing complex was planned. A central wing was added to the northern pavilion and a new southern pavilion was created. This gave the castle its present form and was expanded until 1690.

In the years 1693–1695 work took place on the corps de logis , but the plan for a three-wing building was soon discarded.

The showpiece of the palace is the coat of arms hall on the second floor.

The gallery was changed in 1750 by walling up the arcades .

The two gatehouses were built between 1804 and 1806. In 1884, the paneling and a stove in a state room from the Swiss Haldenstein Castle were sold to the German Industrial Museum (later the Museum of Applied Arts) in Berlin. It was later installed in Köpenick Castle.

Wilhelm Unverzagt initiated an archaeological investigation in 1938. Among other things, a larger part of the foundations of the castle was exposed. In 1963 the palace became the location of the East Berlin Museum of Applied Arts and was therefore open to the public for the first time.

Extensive restoration work began in 1994. Here old parts of the building were also discovered. After the renovation was completed, the palace was reopened on May 27, 2004 and now houses the second building of the Museum of Applied Arts of the Staatliche Museen zu Berlin next to its headquarters at the Kulturforum near Potsdamer Platz . The permanent exhibition with the title “Room art from the Renaissance , Baroque and Rococo ” shows a cross-section of interior design from the 16th to 18th centuries in 21 rooms on three floors.

Adjacent to the church, the eastern building now houses a restaurant.

Around 1690 a small baroque garden was laid out south of the castle .

In the summer of 1712, an aloe ( Agave americana) with a height of almost ten meters caused a sensation . It had 44 branches and 7,277 flowers. The agave went down in the history of the palace park as a "miracle aloe" and was admired by the Russian Tsar Peter the Great as well as by other important visitors to the park. There are hardly any pictures or plans of the park from this period.

The garden, which was previously in good condition, became increasingly overgrown after the death of Duchess Henriette Marie von Württemberg-Teck (1782). From 1804, therefore, the baroque palace garden was redesigned into a landscape park under Friedrich Wilhelm Carl von Schmettau . After Schmettau's death, the park returned to the Krone and overgrown again.

Another change to the park took place in 1963/1964. Here, however, historical designs were not taken up, so that from now on the palace park conveyed an ahistorical image. At least the woody vegetation in the Köpenick Castle Park still indicates the influence of the lowlands.

There are several sculptures and memorial plaques in the castle park. Its main path runs not far from the water, which it offers a good view. In the middle of the park there is a larger open area that allows an unobstructed view of the castle. The castle courtyard is also used for events and concerts, especially in the summer months.

In addition to the usual use as a residential building and hunting lodge, the following were of particular importance: