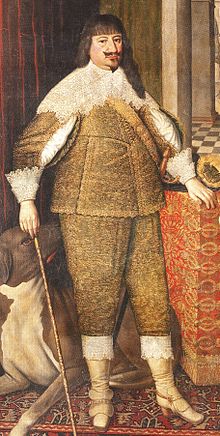 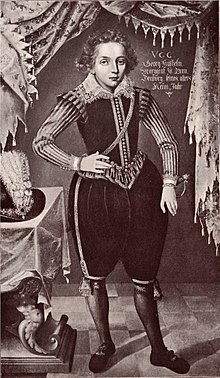 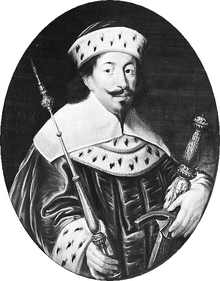 Georg Wilhelm in the elector's regalia

Georg Wilhelm (born November 3, jul. / 13. November  1595 greg. In Cölln on the Spree ; † 1. December 1640 in Königsberg ) from the sex of the Hohenzollern was from 1619 to 1640 Margrave of Brandenburg , Duke in Prussia and Duke of Kleve , Count von Mark as well as Elector and Arch Chamberlain of the Holy Roman Empire .

When Georg Wilhelm's father, Elector Johann Sigismund, was dying in 1619, his son took over the government of the Electorate of Brandenburg , the Duchy of Prussia and the Principality of Kleve and Mark on the Lower Rhine . At this point in time, Georg Wilhelm already had government experience, as his father - after studying in Frankfurt an der Oder  - had sent him to Kleve as governor for five years .

On July 24, 1616 Georg Wilhelm married in Heidelberg Charlotte Palatine Elizabeth , a sister of the Elector and Count Palatine Frederick V , who since 1608 as head of the Protestant Union played an important role in national politics and in August 1619 took the crown in Bohemia what led to the outbreak of the Thirty Years War . After the marriage, his mother-in-law Luise Juliane von Nassau-Oranien also lived at the court in Brandenburg. After her son Friedrich V had to flee Bohemia from the Palatinate and then also lost his electorate in January 1621, she constantly urged her son-in-law Georg Wilhelm to do something decisive for her dethroned son Friedrich V of the Palatinate. He had open ears for their complaints, especially since he was very upset about the persecution of Protestants in Bohemia by the emperor. However, the emperor had leverage in hand because the king of Poland - a brother-in-law of the emperor - had ceded the controversial province of Prussia to Brandenburg as a fiefdom of the Polish crown, a bribery measure that, by accepting it, made Georg Wilhelm feel obliged to the emperor .

In addition to the mother-in-law, the youngest brother of his wife Ludwig Philipp von der Pfalz , who married Princess Marie Eleonore of Brandenburg, was also taken in at court, which shows that both families were closely linked. Another marriage that gave rise to doubts about the loyalty of the Brandenburgers to the emperor was the marriage of the sister of Georg Wilhelm Katharina von Brandenburg in 1626 , who married the Protestant prince of Transylvania Gabriel Bethlen , who married the emperor in 1626 until his death in 1629 Alliances with the Swedes as leaders of anti-Habsburg uprisings in Royal Hungary in what is now Slovakia often caused difficulties.

In 1620 Georg Wilhelm suffered a non-healing lower leg wound in an accident, which after 1631 also spread to the other leg. This meant that he often had to be carried in a litter.

For Georg Wilhelm, a Calvinist elector with good intentions, securing the territorial acquisitions of his father Johann Sigismund was a primary government goal. When he took office, he intended to remain neutral and loyal to the emperor in the thirty years' war that was just beginning in the waters of the Electorate of Saxony, which was expressed by the fact that he entrusted the execution of his policy to the emperor's loyal and selfish first minister, Schwarzenberg, and was not anxious for Brandenburg to build their own army. His plans, however, were not made easy for him, especially since, as a Calvinist with a Catholic government, he encountered opposition from the Lutheran-Protestant bourgeoisie and was also a ruler who was only a little decisive.

Difficult situations arose for Georg Wilhelm after his sister Maria Eleonora married the Swedish King Gustaf Adolf on November 25, 1620 . It came to diplomatic entanglements, since the Polish King Sigismund III. Wasa , the liege lord of the Duchy of Prussia, had asked for the hand of the princess for his son Wladyslaw . When the Swedish king began to interfere with the emperor in the war on the Baltic coast in the following years, there was new conflict. The situation worsened when Gustav Adolf massively supported the city ​​of Stralsund, which was besieged by an imperial army under Hans Georg von Arnim and Wallenstein from May 1628 onwards. From the emperor's point of view, Georg Wilhelm was related to a Protestant alliance that was aggressive towards the emperor. That had already begun years before in November 1620, when his wife Elisabeth Charlotte was able to get her husband to have her brother and former Elector Friedrich V of the Palatinate, who had been given an imperial ban, first find protection in Küstrin in Brandenburg after his expulsion from Bohemia .

The wife of the Brandenburg Elector continued to act against the imperial policy and, under the protection of the “Protestant court party ”, opposed the pro-imperial and self-directed first Catholic minister Adam von Schwarzenberg . He continued to determine the policy of the Electorate of Brandenburg and was only released in December 1640 after the death of Elector Georg Wilhelm and after his son Friedrich Wilhelm took office, arrested and replaced by the Protestant diplomat Otto von Schwerin . Brandenburg thus increasingly came into opposition to the Austrian imperial family.

Brandenburg suffers after the beginning of the war

During the first phase of the war, the Bohemian-Palatinate War , the Mark Brandenburg was largely spared from the effects of the Thirty Years' War until 1626. Even after the beginning of the second phase of the war, the Danish-Lower Saxon War , Elector Georg Wilhelm, who had no army of his own, wanted to remain neutral. The situation in the country became more and more threatening, however, because it became clear that the Margraviate of Brandenburg was geopolitically located between the parties involved in the conflict and thus became the deployment and supply area for armies on all sides. For example, Wallenstein stationed his troops in places on the Oder and Elbe in order to prevent the merger of the Danish army under King Christian IV of Denmark with the army of the mercenary leader Ernst von Mansfeld and even refused to let the allied army operating further west near Magdeburg to supply the Catholic League under Tilly with supplies that his mercenaries had acquired through looting in Brandenburg.

A situation developed in which Brandenburg was almost overwhelmed by the events of the war during the third phase of the war, the Swedish War , which began with the intervention of the Swedish army under King Gustav Adolf and ended with the conclusion of the Peace of Prague (1635) was exploited, plundered and pillaged by all those involved in the war for their own military purposes and supply needs.

This was also a consequence of Georg Wilhelm's indecisive or non-existent policy, which was exposed to additional family influences and was described by an English agent as " cold and simple-minded neutrality ". The main interest of the elector was the preservation of his dynasty for himself and for his son. The policy was carried out by Minister Schwarzenberg, who was friendly to the emperor and always minded for his own benefit, but his complaints were not heard by the emperor either, but were rejected.

Georg Wilhelm had no way of successfully resisting troops, neither the League troops under Tilly in the conquest and cruel destruction of Neubrandenburg (March 1631), nor the Swedish troops, who could not be prevented from plundering the Duchy of Pomerania, East Prussia as a base of operations against Poland and to use Pillau as a port for their purposes. In January 1631, Swedish troops moved to Bärwalde in Brandenburg to conclude the Treaty of Bärwalde with France (January 1631). This treaty made it possible for the Swedes to continue the war financially, and Frankfurt an der Oder was conquered soon after the treaty was concluded (April 1631). All troops were able to move freely in the march during this time and as a result the population was severely affected by epidemics, destruction and famine in the first phase of the war . At the end of the war, which was not yet foreseeable at the time, Brandenburg and Pomerania had lost a large part of their population and were among the regions with the highest population losses. The destructive consequences of the war were still noticeable in Brandenburg a good 100 years after the end of the war.

Elector Georg Wilhelm was personally put under massive pressure by the Swedish King Gustav Adolf to give up his resistance, finally to fulfill verbal alliance promises and to enter into an alliance with Sweden. When Swedish cannons were even aimed at the electoral palace on June 21, 1631, Georg Wilhelm gave in and signed an alliance with Gustav Adolf, who made the resources of Brandenburg available to the Swedes and also the fortresses Spandau and Küstrin.

When Duke Bogislaw XIV of Pomerania died in 1637 , Emperor Ferdinand III enfeoffed. according to the Treaty of Grimnitz 1638 Georg Wilhelm with the defunct Duchy of Pomerania. However, this was conquered by the Swedish troops in 1630 and has been occupied by Swedish since then. Georg Wilhelm was unable to take possession of the duchy. He had no armed forces worth mentioning and in August 1638 had moved with the entire court to the undestroyed Duchy of Prussia outside the empire, where he was sick in Königsberg .

Since October 1640, the elector was constantly bound to bed. Apart from his chronic leg disease, he suffered from severe dropsy .

Under the company name Der Aufrichtende he was accepted as a member of the Fruit Bringing Society .

Georg Wilhelm died after a long illness at the age of 45 on December 1, 1640. The causes of death were given as dropsy and stroke . He remained the only Brandenburg margrave whose grave was found in Königsberg.

Statements on the politics of Georg Wilhelm

Georg Wilhelm is considered to be a weak and less decisive ruler. On the one hand he was obliged to the Catholic Emperor Ferdinand II of the empire , on the other hand he was related by marriage to the Swedish King Gustav II Adolf and shared the same Protestant denomination . He threw Brandenburg into chaos with his policy, which swung back and forth between the two camps.

“Does the elector want to intercede (stand up) for others! He should be happy if he keeps his own country. "

“His lovers must be either friend or enemy. When I get to its limits, it has to explain itself cold or warm. God or the devil argue here. "

In 1892, in the course of the Kurfürstendamm, a Georg-Wilhelm-Strasse in Berlin-Halensee was named, just like after all the other electors.

Georg Wilhelm married Elisabeth Charlotte (1597–1660), daughter of Elector Friedrich IV of the Palatinate , on July 24, 1616 in Heidelberg , with whom he had the following children: