The title of this article is ambiguous. Further meanings are listed under Katharina von Brandenburg (disambiguation) . 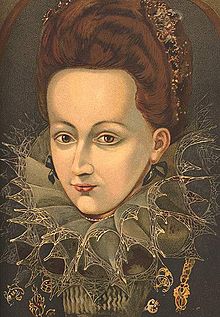 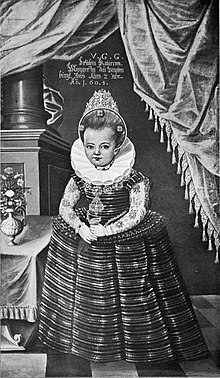 Katharina was a daughter of Elector Johann Sigismund von Brandenburg (* 1572– † 1619) from his marriage to Anna (1576–1625), daughter of Duke Albrecht Friedrich of Prussia . In 1623, when she was staying with her sister Maria Eleonora in Sweden, Tsar Michael sought her hand in vain.

She married Prince Gabor Bethlen of Transylvania (* 1580– † 1629) in her first marriage on March 2, 1626 in Kaschau . During his lifetime, Katharina was elected Princess of Transylvania in 1626 and recognized as her successor. She followed her husband as sovereign princess and was confirmed in office by the Sublime Porte . Because of her inclination to Catholicism , her love affair with Count Istvan Csáky and her lack of assertiveness in the throne disputes, she resigned after the state parliament in Medias had strongly criticized her and the estates in Cluj forced her to resign.

Her brother-in-law Istvan followed as Prince of Transylvania, but he also resigned a few weeks later. The following Prince Georg I. Rákóczi deprived Katharina of the castle and rule of Făgăraş , the only possessions that her husband had left according to her will. Rákóczi also forced her to adopt his son Georg .

Katharina withdrew to Stuhlweissenburg and in 1633 converted to the Catholic faith on her widow's residence Tokaj . Emperor Ferdinand II then put them back into possession of their possessions, which were assured in a will.

Her second husband became Duke Franz Karl von Sachsen-Lauenburg (1594-1660) on August 27, 1639 in Ödenburg . Katharina sold all of her Hungarian possessions and moved to Germany. She died in 1644 at Schöningen Palace , the widow's residence of her sister Anna Sophia .

Katharina had remained childless in both marriages.