This article refers to a representative entrance hall. For a small vestibule in a house, see vestibule (architecture) . 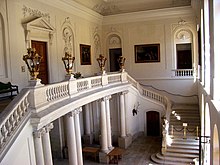 A vestibule ( Latin vestibulum , forecourt, forecourt, antechamber ”) is a representative entrance hall in modern architecture . Functionally, the vestibule does not differ from the foyer , but formally. The vestibule usually refers to rooms with high ceilings, grandiose structures and elaborate design, while a foyer can also be a simpler entrance hall.

The term is borrowed from ancient Roman architecture . There, vestibulum was initially used to describe the decorated space between the street and the front door of elegant houses. In the late period of the Roman Republic , the name was transferred to the passage space between the entrance and the atrium . According to Kuntze (see reference), the original purpose of the vestibule is to be the stable and Schirrhof of one property.

The etymological origin of the term vestibulum is not clear. Ludwig August Kraus derives from the goddess Vesta ( goddess of doors ).