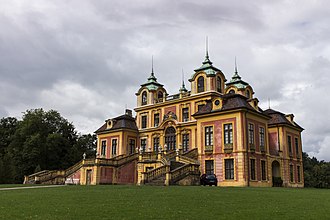 As a pleasure palace ( French maison de plaisance , which means both "country house" and loosely translated " pleasure house " - from plaisir: "pleasure", "joy", "pleasure" - means) is a small palace mostly owned by princely builders, which is the private Pleasure served and apart from court ceremonies and state duties, was inhabited or visited in leisure time and was mostly located in the vicinity of larger residences.

With the beginning of the Renaissance , the desire for representative castles awoke in the nobility and slowly the old castles were abandoned or converted into homely residences based on the Italian model, using ancient forms. In the course of time, many aristocratic residences grew into large castles, although mostly symbolically "fortified" by moats and towers.

Especially in the subsequent Baroque period , however, the court ceremonies also changed and this was reflected in the architecture. The princes were more and more at the center of an elaborate court holding that reached its zenith in absolutism when Louis XIV created a rural residence with the Palace of Versailles, including a residential town, and thus a new type of palace. Court etiquette compelled the nobles to spend immense sums of money on their clothing and to spend their time mainly at balls, dinners, and other festivities that were the everyday routine of court life. The king, in turn, had a large staff to organize these permanent events. No aristocrat who relied on the king's favor could risk his absence. Instead of regulating their regional affairs and maintaining their power there, the nobility now vied for such trivial honors as helping the king to dress. The king himself organized his entire daily routine into events that were allowed to be attended according to strict criteria of rank and distinction. Even getting up took place in three acts, the “petit lever ”, the “première entrée” and the “grand lever”, as did taking meals and going to bed. The granting of audiences or the holding of parties also followed strict rules, which the enfilade of the rooms had to comply with exactly.

Through the ceremony, the "Sun King" kept the noblesse d'épée , the high-ranking and wealthy nobility , employed and transferred the responsible positions in the state administration to the noblesse de robe , a new official nobility to which well-educated bourgeoisie , who economically from were dependent on the ruler's favor. Political power rested firmly in the hands of the king. Mainly for this reason, the grand goût of palace construction (and park design) at Versailles was imitated by ruling princes across Europe, as was the court ceremony. The residences did not serve as places for the rulers' personal enjoyment, but were an instrument of political power. Due to the constant ties of the high nobility to the court, these powerful houses not only became personally dependent on the king, but were also kept away from claims to power or even rebellions, as Louis XIV had experienced himself with the Fronde in his youth . The regent was also surrounded by numerous officials, generals, envoys, artists, musicians, servants and supplicants, and the residences were literally overflowing with people.

The Grand Trianon , on the right in the background the Palace of Versailles 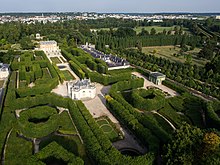 The Little Trianon in the Park of Versailles

However, the generation of rulers after Louis XIV felt the desire to no longer have to play a stage-ready role in court ceremonies without interruption, but to be able to lead an individual life in addition to all duties. The desire for more intimacy now led - in addition to the traditional residential buildings - to the building of pleasure palaces, to which not the whole court society, but only a narrow circle, had access. Jacques-François Blondel made himself the spokesman for this generation with his book on pleasure palaces. The book was often used as a template. Louis XIV himself had already created the models for this type of castle with his Marly-le-Roi Palace (1679–1686) and the Grand Trianon in the Park of Versailles (1687–1688).

In these maisons de plaisance the princes could withdraw with their families or their mistresses , here they could devote themselves to leisure and pleasure. Pleasure palaces were primarily places of smaller celebrations, dinners, dance and music, often also for literature and painting . They were usually not permanent residences, but places of excursions. In this way they formed the opposite of the actual residence, which was often nearby, served state business and where etiquette always had to be observed.

As with the large residential buildings, the highlights of this form of palace architecture were also the Baroque and then the Rococo , which - in addition to the usual aristocratic castles on rural estates - preferred this small form to the large princely buildings: the pleasure palaces, often hidden in magnificent palace parks , stood out mostly characterized by a particularly rich and valuable furnishings, at the same time the rooms and salons became more intimate and comfortable. Major artists from the respective region worked on many of the buildings. At the same time as the prototype Marly-le-Roi, the palace in the Great Garden in Dresden was built (1678–83), later the Favorite pleasure palace in Mainz (1700–22), the Monbijou palace in Berlin (1703–1706) Rastatter Favorite (1710–1730), the Ludwigsburg Favorite (1717–1723), the Falkenlust hunting lodge in Brühl (1729–1740), the Weimar Belvedere (1724–1744), the Clemenswerth hunting lodge (1737–47) and the Amalienburg in the park from Nymphenburg Palace (1734–1739); the latter also served as a hunting lodge, from whose roof balcony one shot at game driven past. Later examples are the Benrath Palace in Düsseldorf (1755–1773) and the Baum hunting lodge near Bückeburg (1760/1761).

Frederick the Great was a special case insofar as he withdrew almost completely from court life and etiquette after the Seven Years' War , led a life en philosophe in close circle of friends, and from March to October lived in his summer residence in Sanssouci , which he named Vigne from 1745 ( Weinhaus) had built. He only moved into the Potsdam City Palace for the winter months ; he usually only visited the Berlin Palace during the ball season after the New Year. For guests and festivities, however, he had another large, classic-baroque palace built in the park of his pleasure palace, the New Palace (1763–1769). A special feature of Sanssouci, in contrast to most of the pleasure palaces of French style, is the design of the entire complex according to the conditions of a moving landscape, the conversion of a bare sand hill into a terraced vineyard with glazed planting rooms, the creation of point de vues on both sides of the valley. Only the Obere Belvedere in Vienna and the Solitude Palace (1763–1769) near Stuttgart have a similarly dominant location , which, however, appears less intimate on a high plinth than the single-storey, ground-level Sanssouci, whose model Benrath followed. The style of the pleasure palaces was of course subject to changes in the taste of the time, so Wörlitz Palace was built as an early classicist building based on the English model at the same time as the late Baroque New Palace in Potsdam from 1763 , integrated into an English landscape garden . Another classicist example is Monaise Castle , built in Trier between 1779 and 1783 . In Potsdam the marble palace was built in 1787–1793 in the new style and from 1840 the Charlottenhof Palace .

The retreat of the rulers to their pleasure palaces could also have political consequences: The French kings' first pleasure palace in the park of Versailles, the still quite spacious Grand Trianon , soon became too crowded with court society, so that Louis XV. created the Petit Trianon . But even this was still too accessible to the subsequent Queen Marie Antoinette and so she created an artificial farm with the Hameau de la Reine on the edge of the Versailles Park, to which she withdrew with her closest favorites so as to hardly appear at court. let alone in the capital Paris. Not least, this made her extremely unpopular with the aristocracy and the people and contributed to the outbreak of the French Revolution , which she and her husband Louis XVI. eventually throne and life cost.

The term pleasure palace is a translation of the French Maison de Plaisance and generally refers to the small princely refuges of the Baroque and Rococo periods and classicism. On the other hand, the simultaneous, often stylistically similar country castles of the lower nobility are not designated as such, as they meet the need for living and representation of a landlord (hence also called a manor house ), but not the withdrawal of a sovereign from his duties as a ruler (and thus his pure "pleasure") ") served.

Royal country and hunting castles already existed in the Middle Ages ( Vincennes Castle , Castel del Monte , Windsor Castle ). The Renaissance period also featured large or small princely country castles and hunting seats ( Hampton Court , Fontainebleau , Blois , also with lush parks such as the Villa d'Este ). In the Baroque period, the extensive rural residences à la Versailles were built all over Europe, which served to accommodate a complete court society including all its ceremonial functions ( Schönbrunn , Nymphenburg , Schleißheim , Ludwigsburg , Schwetzingen , Brühl , Nordkirchen , Het Loo , Drottningholm , Peterhof , Tsarskoye Selo , Caserta , etc.). The pleasure palaces were mostly built in the vicinity of these palaces. These have their direct forerunners in Italy, in the simple "casino" or "casino di caccia" (hunting lodge) of the Renaissance period as well as in the more elaborate variants, such as the rural Medici villas in Tuscany or the Venetian villas of Palladio , which in turn were from the ancient forms of villa urbana and villa rustica were influenced.

Although pleasure castles could also be used for hunting, they are to be distinguished from the large courtly hunting castles, which were intended to hold court hunts lasting several days with numerous entourage and were therefore dimensioned accordingly ( Fontainebleau, for example, or the hunting castles of Augustusburg , Moritzburg and Hubertusburg in Saxony ). The smaller princely country palaces of historicism are usually not referred to as pleasure palaces either , although they fulfilled similar functions as places of retreat. But they no longer corresponded to the French type of Maison de Plaisance and their Italian Renaissance predecessors, but were stylistically inspired by the castles of the Middle Ages; they were also often located apart from the large residences. Exceptions, namely typical staffage and park castles, i.e. pleasure castles, are, for example, the Gothic House in Wörlitzer Park (1786/87) or the Löwenburg in Kassel Bergpark Wilhelmshöhe (1793) in the early neo-Gothic style .