View through the Wörlitz Castle Park to the Temple of Venus

Even in ancient times, gardens were created to connect and complement stately palaces . The castle park as a European art form developed from the castle gardens, which were originally used as kitchen gardens, and over the centuries gained increasingly representative forms and significance. From modern times and together with the building of the palace, to which garden art developed analogously, various garden systems were developed over the centuries, the history of which can be summarized in three epochs. 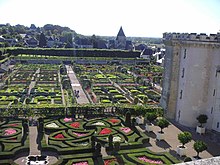 The first formal palace parks as understood today were created in Renaissance Italy , where they enriched the outdoor areas of the villas . The attitude towards life and the art of the Renaissance spread throughout Europe, and with the new building forms the new impulses from horticulture were also adopted.

For the first time, flower beds, hedges, fountains and avenues were put together geometrically and arranged into decorative parterres . These garden areas were still self-contained, not designed to be effective from a distance and often had no structural reference to the residential building; not infrequently they were even built some distance from the castle. This was based less on aesthetic ideas than on practical ones: existing fortifications, which as a rule could not be dispensed with, simply did not offer space for lush gardens. The gardens were often with terraces decorated with statues decorated, even the topiary to crop-called skill, bushes and shrubs artfully and get in shape, the first time was applied. The epoch loved the unusual, and so the gardens with grottos and labyrinths also became a sensual experience in which one could and should be amazed .

A German (restored) variant of this garden style can be found at Schloss Güstrow . The Hortus Palatinus of Heidelberg Castle , which today only exists in rudiments, was famous . 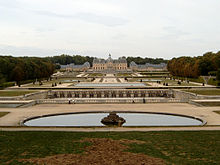 The large, symmetrical Baroque park developed from the Renaissance gardens in the 17th century , which flourished in France and was copied across Europe. The park was seen as landscape architecture , and the baroque gardens were the extensions of the buildings and complemented the palace from the outside. The rules of mathematics were imposed on nature as well as on buildings.

The center of these gardens was always the palace, from whose central building the axis around which the park was built was drawn. The line of sight was formed to the horizon and should also convey a feeling of the power and majesty of its builder. Especially for the newly planned palace buildings of this era, there was the opportunity to orient the gardens far into the distance without disturbing fortifications. In the immediate vicinity of the castle, the originally small ground floor areas, adorned with flower ornaments, grew into large plant areas that were richly decorated with intricate broderies . The more distant areas were divided up by large pools and wide lawns, and the tree-lined parks were made into bosquets in which the lounges and cabinets of the palace were repeated outdoors. Endless avenues led into the vicinity of the castle from miles away. Pavilions , orangeries and pleasure palaces filled the gardens, and mythological motifs were depicted in the statues and fountains .

Plan of the part of the park of Sanssouci , Potsdam, which still exists today in this form

Examples of the few fully preserved palace gardens from this period are that of Schleissheim Palace , the Great Garden in Hanover-Herrenhausen and Sanssouci Park in Potsdam .

From the middle of the 18th century , the landscape park based on the English model slowly dominated . With the epoch of classicism a new understanding of art awoke, the rigid forms of the baroque and gardens were now considered false and unnatural, and attempts were made to find a way back to nature and to give the park landscapes a mature appearance.

Artificial ruins , temples , wide lakes and created natural waterfalls became modern , rolling hills formed the landscape, and the pruned plants gave way to wild , yet well-kept nature. The transitions from the actual parking spaces to the surrounding area were designed almost imperceptibly. Exotic plants could be exhibited due to the now extensive trade relations. The parks were supposed to resemble landscape paintings and convey romantic feelings; they were viewed as Arcadia and glorified equated with a philosophical life. Such a garden should no longer announce the power of its builder, but stimulate moods.

Since natural motifs were in demand in this epoch, the regularity of the baroque gardens often disappeared completely and they became - e.g. B. at Wilhelmshöhe Palace - completely replaced, or at least they were merged with the new landscaped gardens, as at Charlottenburg Palace .

King Friedrich Wilhelm II. For example, decided on in 1787 as a successor of Frederick the Great to the classical baroque gardens of Sanssouci aware by the court gardener Eyserbeck one in the style of the English landscape garden " New Garden " in the north of Potsdam Creating whose name it bears therefore today . The park on the shores of Heiligem See and Jungfernsee , now a UNESCO World Heritage Site , is teeming with ruins, temples, Egyptian elements, grottos and the typically curved paths through long grass meadows, as well as the visual axes through the Potsdam cultural landscape known as the “ Prussian Arcadia ” .

In the course of historicism and the ensuing tendency towards romanticism , many old facilities were reforested and rebuilt. Most of the parks as we experience them today received their final shape in this era. At the end of the 19th century , the era of the large palace gardens came to an end, as did that of the palace buildings themselves, new facilities were rarely built and mostly only on a smaller scale. With the end of most European monarchies , many palace parks were opened to the public. Today they are places of relaxation and leisure, but they are also still evidence of art and a challenge for the preservation of garden monuments .

The examples given here are only intended to provide a brief overview of various palace parks in Europe:

Ground floor in the palace garden of Charlottenburg

Ground floor in front of the Grand Trianon

View of the main axis of Het Loo

Cascade and canal from Peterhof 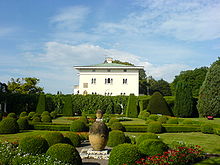 Ground floor in front of the Palacio Real of La Granja

Significant German palace parks can still be found today. B. at

Important English palace parks include B. to

Important French palace parks include B. to

Important Italian palace parks include B. to

Important Dutch palace parks include B. to

Important Austrian palace parks include B. to

Important Russian palace parks include B. to

Important Swedish palace parks include B. to

Important Spanish palace parks include B. to