The Mirabell Palace in Salzburg's Right Old Town in Austria is one of the most famous tourist destinations in the city due to its gardens.

The entire complex with all outbuildings and horticultural monuments is under monument protection and is part of the UNESCO World Heritage (see also the Historic Center of the City of Salzburg ). The interior is largely used by the Salzburg city administration; the State Hall ( marble hall ) serves as a concert and wedding hall and, as the latter, is very often used by international guests. 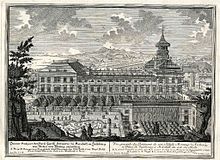 View of the castle in an engraving by Franz Anton Danreiter (c. 1735)

Plan of the palace and garden from 1775

View of the castle in the Sattler panorama from 1829

Mirabell Palace, today located in the new town of Salzburg, was built by Archbishop Wolf Dietrich von Raitenau around 1606 outside the city walls for the archbishop's lover or secret wife, Salome Alt, and was initially called Altenau Castle . It was "ain nice, big, squared, glorious Gepeu, like ain castle or vestry, with a following, adorned by Plech, shining Thurn and inside, also outside, adorned and provided with beautiful gardens of all kinds of Kleutlwerch, Paumgewächs and fruits". Remains of this building have been preserved in the south-west corner of today's building in the basement. For his 15 children, the sovereign prince, who was always caring for his family, obtained legitimacy from the emperor as a legal heir, and for children and loved ones he was also raised to hereditary nobility. Mother and children now called themselves Alt von Altenau . But that was of little use later. After Wolf Dietrich's fall and solitary confinement at Hohensalzburg Fortress in 1612, his successor and nephew Markus Sittikus von Hohenems soon drove his wife and children from Altenau Castle. In order to completely erase the memory of his predecessor, Markus Sittikus named the palace Mirabell . Mirabell is a female given name from Italian ( mirabile 'admirable' and bella 'beautiful').

Prince Archbishop Paris von Lodron had Mirabell Palace and its gardens included in the new strong fortification belt on the right bank of the Salzach during the Thirty Years' War from 1620 to 1642. In contrast to Markus Sittikus, he liked to live in the castle and also died here.

From 1721 to 1727, on behalf of Archbishop Franz Anton von Harrach , the well-known Baroque master builder Johann Lucas von Hildebrandt converted it into a magnificent baroque palace complex, a four-wing complex with an inner courtyard, which after tough discussions is no longer used as a parking lot. In 1818, a devastating fire in the city caused great damage. The reconstruction was carried out on behalf of Emperor Franz I , who himself gave precise instructions. The concept of court building officer Peter Nobile was too expensive for the emperor, which is why he commissioned the Salzburg district engineer Johann Wolfgang Hagenauer with the planning and construction. As a result, the building lost much of its unique baroque appearance. The mighty tower in the middle of the east facade was removed, the delicate gable structure with the east-facing corner projections disappeared, as did the roof ledges, richly decorated with numerous vases and 28 figures. Fortunately, the west-facing courtyard facade and the garden facade in the west have largely been preserved. The rhythm of the three -dimensional protruding risalits and well-structured wall surfaces convey an idea of ​​the original appearance of the baroque masterpiece, although here too the ornate roof top and figures are missing.

From 1810 to 1816 under Bavarian rule, Mirabell Palace was the residence of the Bavarian Crown Prince. Prince Otto of Bavaria , later King Otto I of Greece, was born in the castle on June 1, 1815 .

Before 1849, the father of the Salzburg painter Hans Makart worked here as a room attendant. Archbishop Cardinal Maximilian Joseph von Tarnóczy resided in this castle from 1851 to 1863 . The elderly Capuchin father and Tyrolean freedom hero Joachim Haspinger († 1858) spent the last four years of his life here in a ground floor apartment.

In 1866 the castle and the Kapuzinerberg became the property of the city of Salzburg in return for compensation of 50,000 guilders. The emperor had given the Mirabell Gardens to the city two years earlier. Between 1947 and 1950 the offices of the mayor and his deputies were established here, as well as the magistrate's office and some magistrate departments.

Particularly worth seeing parts of the castle

The Georg-Raphael-Donner -Stiege is a grand staircase that extends from the ground floor to the second floor and is located in the north corner of the west wing. The balustrade of the stairs is richly entwined and decorated with various putti, which can be seen in various postures, sitting, lying and playing. In the walls there are niches in which mythologically inspired marble sculptures stand. There are antique busts above the doors.

The marble hall is clad in marble, imitation marble and gilded stucco. In between there are decorative stucco fields. The former large ceiling painting by Johann Michael Rottmayr was lost in the fire in 1818. Because of its ambience and very good acoustics, the hall is now used for weddings and classical concerts. As part of the Salzburg Palace Concerts under the musical direction of Luz Leskowitz , from 2016 under the direction of Konstantin Hiller, well-known ensembles such as the Salzburg Soloists, the Bartók Quartet and the Twins Quartet as well as famous soloists such as Jörg Demus and Igor Oistrach perform .

The chapel (since 1938 Church of the Old Catholics) had before the fire of 1818, a ceiling fresco by Bartolomeo Altomonte , it is the Holy Nepomuk consecrated. Badly damaged in the fire, it was re-consecrated in 1837 by Archbishop Friedrich Johann Jacob Cölestin von Schwarzenberg . The altar with its sculptures by Augustine, Rupert, Virgil and Martin dates mainly from the year 1722. The altarpiece of St. Nepomuk, which was destroyed in the fire, was recreated and inserted in 1830 by Johann Michael Hess . The castle church has been a parish church of the Old Catholic Church in Austria since July 1938 , before the services were held in the marble hall. The small church was renovated in 1952 and 1988. The Old Catholic Church in Mirabell Palace takes part in the ecumenical Long Night of Churches every year . Classical music concerts have also been held in the church at regular intervals since 2012.

A marble dwarf of the dwarf garden

The gardens of the palace include parts that are built in today (e.g. by the Mozarteum University ), the large ground floor , the hedge theater , the water bastion , the rose garden and the original dwarf garden and, instead of the old Mirabell bastion, the spa garden .

The gardens were largely preserved when the castle burned. In the current system, it comes mainly from Johann Bernhard Fischer von Erlach and was modified by Anton Danreiter around 1730 .

The orangery with the adjoining palm house , as a greenhouse , was built around 1725. To the south of it, the Salzburg Baroque Museum has been located since 1973 .

The small elongated hedge theater with its symmetrical paths framed by cut wood and its central open spaces was built between 1704 and 1718 on the Lodron defense wall. It is still used occasionally today for small theater performances or concerts.

The historic baroque dwarf garden south of the raised water bastion - i.e. in front of the fortifications - was transformed into an English garden around 1800, which has long since been lost. Old plans document its original condition. Originally 28 grotesque marble dwarfs were placed in the garden, created in 1690/91 in the course of the baroque redesign by Johann Bernhard Fischer von Erlach by Johann Ernst Graf Thun. They were sold in 1811 and could no longer be completely collected, after which they were temporarily placed on the small preserved Lodron water bastion. The restoration of the original baroque garden. as part of Fischer von Erlach's total work of art, an important concern remains.

Fortresses, castles and palaces in the province of Salzburg