The Frohnburg (rarely also Fronburg ) is located on Hellbrunner Allee No. 53 in Salzburg in the Hellbrunn landscape garden . In history it was also called Grafenauerhof or Schloss Kuenburg and is a typical Salzburg country castle.

The name Frohnburg is derived from Old High German  fro 'Herr, Gebieter ' and therefore means something like 'Herrenschloss'. The use of the word castle when naming such buildings is reminiscent of the prevailing meaning of the word in the Middle Ages as a fortified complex of a nobleman, a ruler (knight's castle).

Built around 1620 as a smaller building (Schlössl, Lustgarten and Meierei), the complex was initially owned by Baron Kuenburg , then Baron Froberg and again continuously between 1670 and 1960 by the Counts of Kuenburg. The structure of the castle dates from around 1670/80 when Johann Josef Graf von Kuenburg redesigned and expanded it.

After the Second World War , the building was confiscated by the American occupiers. In 1960 the Republic of Austria acquired Frohnburg Castle in order to adapt the premises for the Carl Orff Institute. A dormitory was added here later. The castle is still part of the Mozarteum University today .

In the film The Sound of Music (1965), the castle functioned alongside Leopoldskron Castle for the exterior shots as the von Trapp family's villa .

The heraldic cartouche above the entrance portal in the east recalls the time of the Kuenburger. The castle and the castle garden are surrounded on all sides by a high wall. 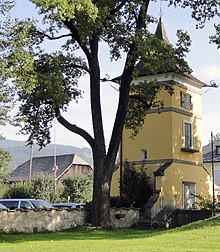 Water tower at the Frohnburg

The castle courtyard is located on the west side of the castle, i.e. on the street at the historically only driveway. The wrought-iron entrance gate on Hellbrunner Allee, flanked by porter's and gardener's houses on both sides, dates from the 17th century.

The castle with the once magnificent baroque castle garden looks east towards the Salzach. Two geometric garden ponds, the central fountain bowl (probably dug in by occupation soldiers around 1954, excavated and restored in 2000) have been preserved from the baroque palace gardens. Also noteworthy is the wall fountain with the depiction of the naiad Arethusa , who is embraced by a dolphin. The fountain was created after Giovanni Battista Cavalieri's Antiquarum statuarum urbis Romae tertius et quartus liber (Roma 1593, fol. 63). Since many of the figures in Hellbrunn are based on Cavalieri's models, this fountain could also originally come from Hellbrunn.

The tree-lined castle axis into Grafenau (also known as Herrenau or Josefiau), which once dominated the landscape, is partially recognizable, and since 2014 it has again been designed as a fruit tree avenue according to historical models. The former bridge in the castle axis over the former Eschenbach can only be partially recognized today and the landscape is severely affected by a parking lot.

A revitalization of the Eschenbach as well as a re-establishment of the baroque garden were considered several times, they would significantly enhance the castle ensemble of the Frohnburg.

The old courtyard of the Frohnburg dairy, east of the castle park, has been preserved in an exemplary manner and has recently been used as a Montessori kindergarten.

Fortresses, castles and palaces in the province of Salzburg