As Villa Urbana ( Latin villa = farmhouse, manor; urbanus = of urban type) was in the Roman Empire a luxury property referred to in the country that served the landlord and his family to temporarily stay. In classical archeology , the predominantly residential villa urbana is distinguished from the agricultural villa rustica .

Development of the Roman Villeggiatur

The term villa refers to a building outside the city walls, originally the residential and farm building of a country estate. In the time of the Roman Republic , traditional agriculture was still the general economic basis of Roman society. Originally, the majority of citizens who were obliged to serve in the army fed their families as small farmers in times of peace . The status of the Roman upper class was also largely defined by land ownership, which was determined by the census . Nevertheless, the social and political center was the city, above all of course the city of Rome . Personal presence in Rome was a basic requirement for all political decisions, and this is how the social life of the Roman upper class took place in the city.

The latter gradually changed with the beginning of the 2nd century BC. In the Roman written sources, Scipio Africanus is named as the first patrician who, before the accusations of his political opponents in Rome, withdrew several times for long periods to his villa in Campania . However, he did not withdraw into solitude, but resided there as a host for a larger circle of friends. The villa became a refuge in which, far from the public obligations in Rome, Greek-influenced culture and the Hellenistic lifestyle could be cultivated. Towards the end of the 2nd century BC The temporary holiday stay in a villa - referred to by a modern term as Villeggiatur - gradually became an integral part of the Roman upper-class culture. More and more wealthy Romans built luxurious country houses in order to cultivate the otium , the creative leisure , which was seen as the opposite of the negotium , the everyday life determined by business and political obligations.

The heyday of the villa urbana extends from the 1st century BC. Until the early imperial period (1st century AD). Popular villa areas were above all the landscape around Vesuvius (especially on the Gulf of Naples ) and the rocky coast of the Tyrrhenian Sea . If possible, one owned several villas in different areas in order to be able to enjoy the advantages of the respective climate in the corresponding season. Famous villa owners of the 1st century BC For example, Varro and Lucullus, who are still proverbial today because of his sumptuous meals, were . Cicero , who had only a medium fortune, already owned seven villas, some of which he describes in his letters. In Rome, the extravagant luxury and lavish dinners in the villas of the respective political opponent were often criticized, but villa luxury was an indispensable status symbol for every member of the Roman nobility at this time.

Initially, the Villeggiatur of the Roman emperors did not differ from the customs of the upper class. As a private citizen, Augustus owned numerous villas, but in his official capacity as Princeps he resided in the comparatively simple house of Augustus in Rome. His publicity-shy successor Tiberius withdrew for a long time to his famous Villa Jovis on Capri , from where he handled government affairs from afar. After the great fire of Rome, Nero had extensive parks laid out in the middle of the city and built the Domus Aurea in them , which can be characterized as a villa architecture built in the city. Under Domitian , the villa also assumed the function of a public residence for the first time , so that the imperial villa gradually developed from a private estate into a ruling palace in terms of its architectural design .

One of the most famous imperial villas is Hadrian's Villa near Tivoli from the 2nd century AD.A late example of a rural aristocratic residence is the Villa Romana del Casale in Sicily from the 4th century AD.

Since the design of the Villa urbana reflected the personal wealth and the social self-image of the respective owner and, in addition, was not subject to any structural restrictions due to its location in the country, hardly any fixed building types emerged for the entire complex, unlike, for example, in urban residential building. Even so, there were some architectural elements that appeared in one form or another in every Villa urbana.

Embedding in the landscape and base villae

Various aesthetic and climatic factors played an important role in the choice of the building site. Villas for summer stays, for example, were often built by cooling streams or by the sea. In the cooler season, however, the warm springs of Baiae , for example, were popular, around which a dense mansion developed. High altitude locations were preferred, especially building sites on the slope, from which a selected view of the landscape emerged. The interior layout of the villa was geared towards these landscape views, so that there were lines of sight inside through the various rooms, which finally ended in a viewing room or a terrace that opened up a view of a certain section of the landscape. The villa descriptions by Cicero or Pliny the Younger give some examples here.

In order to create a uniform subsurface for the building on a hillside, large terraces supported by stone substructures were created, which Cicero referred to as basis villae . In clear contrast to Greek architecture, in which houses on a hillside were huddled against the site by several small terraces, in the Roman villa, often with enormous technical effort, one or more large platforms were created through the basis villae , on which the actual villa building was built. This substructure could be several floors high on steep slopes and then contained various cellars, side rooms or cisterns . On the artificial platform created in this way, the actual villa building often jumped back a little, so that the edge of the platform could be used as a viewing terrace or to create gardens.

Large garden peristyle of the Getty Museum , reconstructed based on the model of the Villa dei Papiri near Herculaneum

In the 2nd century BC The peristyle , an inner courtyard surrounded by porticos, was taken over from Greek- Hellenistic architecture and early on became one of the most important elements of upscale villa architecture. While the Greek model had a paved courtyard area, the Romans developed it further into the garden peristyle, in which the porticoed halls framed a garden of any size. Many villas had several peristyle, often a paved one in the living area and then a larger garden peristyle. The peristyle was a versatile architectural element. Additional rooms and sequences of rooms could be accessed via the columned halls, which were used as shady walkways. The openness given by the column positions allowed diverse views, for example from the dining rooms adjoining the courtyard, from which the view of the peristyle garden could be enjoyed. Columned halls and courtyard area often served as a sculpture gallery, where Greek originals and replicas were grouped together according to thematic aspects. 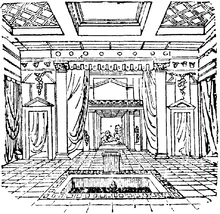 The atrium , a centrally located, high room with a roof opening , was a traditional element of Roman house construction and probably goes back to Etruscan origins. Actually the representative main room of the Roman town house, the atrium was also taken over into the villa architecture, where it often takes on a similar function in the floor plan and serves to develop the adjoining rooms. But it can also be used as a pure passage room ( Villa von Oplontis ) or an adjoining room. The pictures of the ancestors and the lararium were preferred as a room with a high traditional value . In contrast to the peristyle, which remained an integral part of Roman residential architecture until late antiquity, the traditional atrium gradually disappeared from villa architecture during the 1st century AD.

The Roman architect Vitruvius recommended the opposite sequence for the peristyle and atrium compared to the town house: in the suburban villa he described, one first entered the peristyle from the main entrance and then the atrium at the rear of the building. A well-known example of this type of construction is the Mystery Villa near Pompeii: in the axially symmetrical floor plan, the main entrance, peristyle and atrium lie one behind the other on the central axis and thus offer a continuous line of sight through the representative main rooms of the villa.

A special form of villa urbana is villa maritima (Pl .: villae maritimae ). This is used to describe a sea villa, i.e. a villa built on a coast. Already in Roman antiquity there were such villas, which were located in large numbers on the coast of the Tyrrhenian Sea , but also along the coastal zone of the Cote Azure, the Mediterranean coast of Spain, or on the islands of the Tyrrhenian Sea. These occur more frequently in the Gulf of Naples . The best-known representatives of this type include the Pisonenvilla of Herculaneum , the Villa of Catullus of Sirmione (also called Grotta di Catullo), the Villa of Tiberius in Stabiae , the Sea Villa of Asturia and the Villa in Barcola near Trieste. The Villae Maritimae were a design that of course represented the luxurious style of living of the upper class of the Roman people. Many of the villas had private harbors or private fish farms, which represented an additional source of income for the villa owners, although ancient sources have said that these fish farms, also called piscinae or vivaria, often cost more money than they brought in. The villa owners invited to banquets and tried to impress the guests with unusual types of fish. In some cases, people even dined in the middle of the fish farms, as the villas in Sperlonga or Astura show. The architectural features of this type of villa construction are described in various ancient sources. This includes the erection of powerful substructures, i.e. substructures, for the actual construction of the villa, in order to elevate it and thus ennoble it. The view, the prospectus , also plays a decisive role in these villas: Villae Maritimae were particularly popular in the Gulf of Naples. Countless examples of villa scenes have survived from Roman wall painting, depicting either villas by lakes or by the sea. However, these are not real villas, but fantastic buildings, so-called capricci by Villae Maritimae.