Berliner Philharmonie , Sony Center and Bahnower (from front to back)

The Sony Center, modeled on Mount Fuji , seen from the roof terrace of the Allianz Forum, on the right the Quadriga on the Brandenburg Gate , on the left the American Embassy

The Sony Center is a building complex on Potsdamer Platz in Berlin district of Tiergarten of the district center . Sony's European headquarters were originally located in one of the seven futuristic buildings opposite the Philharmonie on Kemperplatz . The German branch is now based there.

The architect Helmut Jahn , managing director of the Chicago office Murphy / Jahn , designed the Sony Center, a complex with seven buildings on a 26,000 m² site in the Mitte district of Berlin . The construction period was three years. The entertainment area of ​​the center was opened on January 20, 2000, and the entire complex was opened on June 14, 2000. Arranged in a characteristic triangular shape, the Sony Center offers space for a combination of work, living and entertainment. At the top of this triangle is the 103-meter-high train tower - next to the three other high-rise buildings on Potsdamer Platz, a building that can be seen from afar.

The total investment cost of the Sony Center was estimated at 750 million euros . The Music Box existed from January 20, 2000 to February 21, 2001 . The Legoland Discovery Center opened on March 31, 2007 . On April 18, 2008, the Sony Center was loan-financed for this sum sold to a group of investors from Germany and the USA , so there has been no absolute increase or decrease in value over the ten years, but a relative decrease through inflationary losses . On May 21, 2010 the owner changed again. Morgan Stanley's group of investors sold the Sony Center to the South Korean state pension fund NPS (National Pension Service) for around 570 million euros.

In 2017, the Sony Center holding company was resold for 1.1 billion euros as part of a share deal to the Canadian real estate company Oxford Properties (a subsidiary of the state pension fund for municipal employees of the province of Ontario ) and the New York investment company Madison International Realty.

In the former Hotel Esplanade at Bellevuestrasse 1, there have been condominiums from the start that have always been run separately from the rest of the Sony Center and have therefore never been sold with the rest of the center. There are three stairways and eleven floors. All apartments are privately owned.

In the basement there was next to an IMAX a multiplex cinema operated by CineStar with ten halls, in which films were often shown in the original language, also during the Berlinale . Both were concluded when the lease expired after 20 years on December 31, 2019.

The steel and glass-dominated building ensemble includes the oval forum , which sees itself as part of the public urban space and is therefore not separated from the surrounding streets.

The preserved parts of the historic Hotel Esplanade form the core of the Sony Center . The Kaisersaal, which weighs 1,300 tons, was moved 70 meters in a complicated process to enable Potsdamer Strasse to be widened to accommodate the changed volume of traffic. Another part of the former hotel building is the breakfast room, which also had to be preserved due to monument protection requirements . This room was dismantled into about 500 parts and later rebuilt with the moved Kaisersaal at a new location in the Sony Center.

These services to preserve listed buildings, which were not initially planned, resulted in considerable costs. A cable net construction had to be developed for the 20 meter high glass facade, which covers the monument protection area. An elaborate high-tech bridge was stretched over the old listed building and leads to the new Esplanade Residence , which provides luxurious living space. 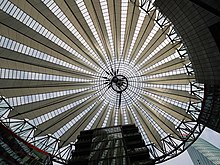 Oval roof from the inside, the railway tower can be seen at the bottom right

The roof construction is a spectacular engineering achievement. A fanned out tent roof made of fabric panels is fastened with tie rods to a steel ring that rests on the surrounding buildings. It is said to symbolize one of the landmarks of Japan , the sacred Mount Fujisan . According to Japanese belief, the Kami live in the mountains, but since Berlin does not have a mountain in this sense, the Sony Center was built as an artificial residence for the Kami, so that Sony is also protected in Europe. The roof was built by the Austrian steel construction company Waagner-Biro .