The title of this article is ambiguous. Further meanings are listed under Variety (disambiguation) .

Varieté or vaudeville theater (after French théâtre de variétés , from: théâtre (theater) and variété (variety, colorful variety) < Latin.varietas = variety) is a stage with a colorfully changing, entertaining program for artistic, dance, acrobatic and musical Imaginations. A variety program consists of a smaller or larger number of performances that are put together like a mosaic for the joint event, each of which forms an artistically closed unit with a beginning and an end. In the French and British-speaking areas, these events were called Music Hall, in the US they were mostly called Vaudeville .

A variant of the variety show without artistic and acrobatic performances was the Singspielhalle , which was particularly popular in Vienna . The Austrian cabaret emerged from this institution, which is located in the fields of singing, acting and comedy .

The vaudeville is related to the theater and the circus , without being identical to either of the two. In contrast to the theater, there is no need for organized dramatic action and apart from the stage, the two forms have little in common. With the basic principle of “unity of diversity”, it is closer to the circus. This also combines performances that differ in form, content and character into a meaningful whole. These two forms distinguish, in addition to the playing area, also the character of the selected individual performances, which in the circus were primarily related to the horse, but in the vaudeville theater were designed for entertainment and sociability. Furthermore, it differs clearly from the theater and circus through the connection with the gastronomy , which was decisive for decades. It is one of the origins of the variety show and can still be found today in the smaller form of cabaret and night clubs .

Already the first variety shows, which emerged from public dance halls in the 19th century, presented individual performances (called "number" because of the serial number in the program booklet) with artists such as strong men, magicians, lion tamers, acrobats , with grotesque pantomimes, elephant dressage, abnormality shows and wrestling matches. Especially in Parisian vaudeville shows, a world of short skirts and long legs, the beginnings of professional undressing as a vaudeville act also began in the 1860s. The secret of their success was the Cancan , which is still considered the trademark of the Moulin Rouge , the Lido and the Folies Bergère . In the café concerts , this dance was the ultimate sexual sensation, with which the laundresses topped up their modest fee by leaving their ruffled panties off.

Around 1892 in Paris a variety show entitled “Yvette Mado goes to bed”, in which a lady undressed until she was standing in front of the bed in a corset and knee-length trousers, was enough to get the moral police to punish, protest and prohibit (This first public striptease became the first filmed striptease). Opponents and supporters fought over and over again in the years that followed, until the constant repetition of undressing scenes from 1895 onwards. The debates remained, but the reprisals disappeared over time, so that the naked body was able to establish itself as an integral part of the French variety revues - the revues experienced an enormous upswing as a result.

In 1907, the then director of the Moulin Rouge Joseph Oller had an idea that would determine the French industry for the next 60 years: he came up with three metal seashells as the only items of clothing for his then dancer Germaine Aymos . Another dancer who is still known today and who took advantage of this trend was Marguerite Geertruida cell, better known under the stage name Mata Hari . Her "Indian-Oriental fantasy dance" caused a sensation thanks to its extremely frivolous presentation at the Paris Theater Olympia , where it appeared in front of a large audience in 1906 as part of a variety program. The dancer Colette danced almost naked in “The Egyptian Dream” in the Moulin Rouge, and in Berlin the Moroccan dancer Sulamith Raha performed her sword dance, the veil dance and a belly dance in an “eva costume” . Dances performed naked by Anita Berber with titles such as “Cocaine” or “Dances of Vice, Horror and Ecstasy”, performed in the Berlin cabaret Schall und Rauch , repeatedly led to tumultuous scenes during the performances. Maud Allan , too , has now danced almost naked on European stages with her “Visions of Salome”. Josephine Baker entered a. a. in two revues by Louis Kenarchand : Your trademark was a banana skirt, nothing else.

In the USA , too , corresponding performances in saloons and dance halls were part of the local red light district , which around 1900, for example, in Butte (Montana), was the social center of emerging cities in the former Wild West. It was only with prohibition and increasing prudery that prostitution , which was then part of the vaudeville, became more difficult and separated. 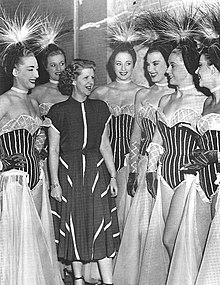 A showgirl or vedette (South America) is a dancer or entertainer who focuses on the representation of physical attributes and beauty. They also appear topless or naked. The term is also used for models who are used for advertising at trade fairs .

In the mid- twenties , a new type of actress emerged - the show girl who sang and danced, wearing glitter jewelry, feather boa, long gloves, fishnet stockings, high heels, gold panties, suspenders and robes. A revue was characterized by a series of scenes in which beautiful women, framed by a splendid set, presented themselves on display. The (half) naked show girl rarely addressed her audience directly; it was a picturesque part of the decoration that underlined the girl's beauty. The show girls were thus aesthetic objects that could be admired. One of the significant features of the variety revues is the staircase as a central stage element, which was invented in the Casino de Paris . The girls, always in exotic costumes, stepped down from this stage staircase, followed by the star, who stood in the center of the evening. Here the foundation stone was laid for the following revues, which can hardly be surpassed in terms of extravagance and luxury. More and more glamor and glamor appeared on the stage, more and more dancers who often changed their costumes up to three times in the show. But it wasn't just the eroticism that counted, but above all the gigantomania associated with the enthusiasm for technology. The quick change of stage was perfected in Vaudeville and the meaning of the " plot " was reduced. Americans have perfected the genre of revue vaudeville with the mega shows in Las Vegas and in the Music Halls of Broadway in Manhattan. 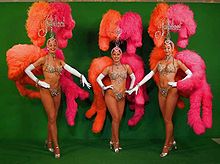 In the USA , variety-like showgirls and dance performances in saloons and dance halls were part of the local red-light districts , which until around 1900, like Venus Alley in Butte (Montana) - were often the social center of newly emerged cities in the west. Showgirls (1995) and Heavy Boys - Easy Girls are like Gold Diggers (1923), Gold Diggers of Broadway (1929), Gold Diggers of 1933 , The Gold Diggers of 1935 , Gold Diggers of 1937 , Gold Diggers in Paris (1938) and The Golddiggers in the Dean Martin Show from 1968 examples of a large number of corresponding film and music theater productions. Prostitution only became more difficult with prohibition and increasing prudishness . It wasn't until 1951 that prostitution was completely banned in both Reno and Las Vegas , but it is still allowed in individual brothels in the surrounding area. 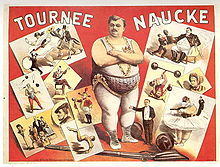 The term Varieté came up in Germany at the end of the 19th century for light entertainment stages. In the larger cities there were numerous stages that were very popular and flourished until around 1930.

The German-language variety theater had an extensive exchange of comedians between the cities of Berlin, Vienna and Budapest, of which around forty percent was German-speaking at the time of Austria-Hungary. Many comedians came from Budapest in particular and flocked to Vienna and Berlin. Conversely, this connection was less pronounced. Well-known examples of this exchange are the Budapest Orpheum , which was founded in Vienna in 1889, or the comedian Josef Modl , who often appeared in Budapest, where a politically more liberal climate prevailed than in imperial and state control and authority in Vienna. The Budapest comedians Anton and Donat Herrnfeld achieved great fame in Berlin because they ran the Herrfeld Brothers Theater there. A group known in all three cities was the Klabrias party .

After 1960, the number of surviving variety shows in Germany fell. Just like the cinema before, now television was increasingly competing. In the end, only the Hansa-Theater in Hamburg remained in the Federal Republic , which consistently advertised its monthly changing classic variety programs with the motto “Never on TV”. In the GDR, on the other hand, some variety theaters ( Friedrichstadt-Palast Berlin, Steintor-Varieté Halle) continued to exist under state control. Inspired by the temporary variety show in the new Hoechst Theater, Johnny Klinke founded the Tigerpalast in Frankfurt am Main in 1988 .

As a result, a renaissance of the variety show began, which led to numerous new establishments.

In Vienna , variety shows were often known as singing arcades, both by name and legally .