The title of this article is ambiguous. Further meanings are listed under clown (disambiguation) .

A clown [ kla͜un ] is an artist whose primary art is to make people laugh . The term "clown" comes from an English term meaning "peasant booby" (16th century), used in English since about 1600 for "fool, jester"; German since the 18th century, perhaps under the influence of Shakespeare translations. An outdated term, especially used in dialects, is Pajass , Bajazzo (via French Paillasse from Italian Pagliaccio ).

The clown cannot always be distinguished from the comedian and the fool ; In any case, the term lacks the disrespectfulness of the jumping jack .

The figure of the clown develops from the zanni , the servant figures in the Commedia dell'arte , which in turn go back to similar figures in Greek and Roman comedy . From the beginning of the 16th century, clowns appeared during the breaks in English plays to entertain the audience. In the 16th century Arlecchino (later Harlequin , Hanswurst ), Pedrolino (later Pierrot ) and Pulcinella appeared in the Italian Commedia dell'arte. These figures, especially Pagliaccio , whose name became the Romanesque term for the modern clown, were further developed by Molière in the 17th century and by Goldoni in the middle of the 18th century . The corresponding German theater figure was called "Hanswurst" since the 16th century. The actor Franz Schuch approximated his Hanswurst again around 1750 to the Italian-French harlequin.

In the 17th century, the clown appeared as the mischievous opponent of Harlequin in the English Harlequinade , a genre inspired by the Commedia dell'arte. In Shakespeare's two plays, characters appear as clowns: in Othello (1603) a servant and in Winter's Tale (around 1610) a stupid shepherd.

Development of the circus clown

Modern clowns can be found in variety shows and especially in circuses. It all began in the second half of the 19th century in a game circle strewn with sawdust, which Philip Astley made the clown's scene. This was initially used for comical artistry on horseback (hence the circular shape). From this, the comedian with the horse developed in the following , for example in "scènes de manège" or "Two Englishmen on horseback". With the establishment of permanent venues ( Cirque Olympique , Cirque Medrano , Cirque d'hiver ), the performance of the clowns also changed. The clown mainly appeared as a pantomime, who stumbled around stupidly in the ring, fell and caught kicks and the like in interaction with other clowns. This already shows the similarity with our current circus clown, who shows a hodgepodge of bundled senselessness by wanting to step through doors with "danger" on them, looking curiously into gun barrels or sometimes eating candles out of hunger. With all these gestures the clown crosses the forbidden limits of society and thus becomes a mocker of reality. The circus with its clowns represents a scaled-down model of the entirety of a culture with all its irrationality and irony.

The first great forerunners of today's clowns were the pantomime artist Jean-Gaspard Deburau with his number “The Doctor” and Joseph Grimaldi , who developed the modern clown with the made-up face in London at the beginning of the 19th century, but which was not yet related with the circus but with the English pantomime.

In the Cirkus Renz, Tom Belling developed the typology of Stupid August , who initially caricatured what happened, but later appeared almost exclusively together with a white clown in the classic clown entree.

The nature and symbolism of the clown become particularly clear in the distinction between the figures, white clown and stupid August, who almost always appear together. In part, the figure of the announcer ( speaking stableman or ring master) is also included in this differentiation, whereby this and especially the director as superior can also serve as an object of fooling around.

Woman made up as a clown without mask ( carnival costume )

The disguise of the typical (circus) clown consists of different elements. He often wears too big, colorful clothes, a wig and a red nose. Often times, a strange inappropriateness is brought out by contrasting sizes such as oversized shoes and miniature instruments. The made-up face, which varies depending on the type, is also special.

Other elements such as glasses, beards, hats etc. are used depending on the situation and intention. 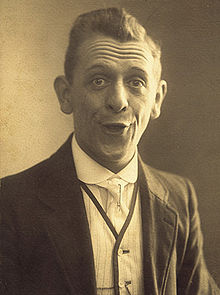 The Swiss clown Grock performed successfully in Europe, America and North Africa at the beginning of the 20th century. The Russian Oleg Popov became famous around the world in the 1960s. Andrei Nikolajew was one of the clowns of the Russian State Circus and was a professor at the Moscow Theater Academy. Charlie Rivels "Acrobat - schööön!" Is world famous . A clown of the film world was the British comedian and actor Charlie Chaplin .

“Clowns without Borders” is - analogous to Médecins sans frontières ( Doctors Without Borders ) - an international organization of clowns who voluntarily travel to crisis areas to play for people and give workshops. A crisis area is understood to be an environment in which, for example, war, natural disasters or poverty prevail. The idea of ​​"clowns without borders" comes from Spain, from where clowns have been traveling all over the world since 1993. Within a short time clowns from France and Sweden took over the idea and meanwhile (2015) twelve national organizations belong to it.

Clowns are finding their way more and more into hospitals and children's homes, where they work as clown doctors or " CliniClowns " (in Austria) by means of improvisation and mostly go from child to child to make them laugh. Examples are the “ Red Nose Clowndoctors ” in Austria, the “ Hôpiclowns ” and the Theodora Foundation in Switzerland or the “Dr Placebo” association in Bulgaria.

Clowns drawn by a 13-year-old schoolgirl in the Faroe Islands (postage stamp from 2002)
→ Main article : Coulrophobia

The pathological fear of clowns is known as coulrophobia. The University of Sheffield, England, asked 250 children between the ages of 4 and 16 about clowns. No one said they found clown pictures hanging on the walls in the hospital funny, some were afraid of them. A remarkable number of children felt uncomfortable at the sight of clowns.

The serial killer John Wayne Gacy appeared as "Pogo the Clown". An example of a negative clown character from literature is the character of Pennywise in Stephen King's novel It . The same applies to the character of Captain JT Spaulding in the horror film House of 1000 Corpses and the sequel The Devil's Rejects .

In the DC universe of DC Comics there is the villain character Joker , who appears as the antagonist of the hero Batman .

In the television series The Simpsons , Krusty the clown appears , a clown character with extremely dubious morals. Smoking, alcohol, pill abuse, sex and gambling are part of his lifestyle and repeatedly influence his show and the way it is perceived by the public. In addition, his merchandise items are often easily inflammable, toxic or sharp-edged. Krusty is often portrayed as a tragic figure drawn by life.

In the mid-2010s, the horror clown phenomenon emerged as a global trend that originally started in the United States. People dress up as horror clowns with the sole intention of scaring passers-by. So mostly intimidating grimaces or disfigured clown faces are depicted. With the help of utensils such as fake blood, weapons, chainsaws or tools, the horror effect should be increased.

The clown in literature