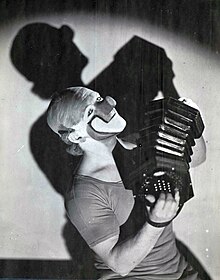 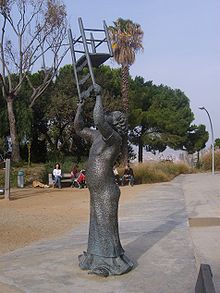 Monument to Charlie Rivel on Montjuïc

Charlie Rivel was the son of the Spanish circus artist Pedro Andreu Pausas , also known as Pere Andreu Rivels , and the French artist Marie-Louise Lasarre. Like his four brothers, he became an artist. The company, founded by grandfather Pedro Rivels , consisted of parents and sons, of whom Charlie Rivel ultimately became the most famous.

As early as 1899, at the age of three, Rivel appeared as a " weight lifter " (the weights were made of paper mache ). After his breakthrough, in 1907 at the Lambert Circus in Paris , he had engagements in Berlin , London and the USA . In 1910 Rivel met Charlie Chaplin , who inspired his stage name, and a few years later also Karl Valentin , who immediately appreciated him. Valentin also gave Rivel a bombardon on the grounds that he was the only person who made him laugh.

In 1931 in Berlin on a whim the exclamation acrobat - schööön! - his trademark for decades. However, his words "A bridge, a bridge" and his heartbreaking crying remained in the audience's mind. The group The Rivels , led by Rene Rivel, existed until 1934. After that, Rivel only appeared solo.

Rivel was an admirer of Adolf Hitler , to whom in April 1943 he telegraphed the warmest birthday wishes. In the same year Rivel performed in Nuremberg while the city was being bombed, but then retired to Chennevières / Marne, where he lived very secluded with his wife Carmen, also an artist. With her he had three sons and a daughter, namely Juanito, Charlie, Valentino and Paulina.

His colleague Grock persuaded him to tour West Germany, which was a great success in September 1952. At that time he also performed in Vienna. A close friendship with the painter Adi Holzer led to numerous pictures and the book "clown!" homage to charlie rivel. In the early 1970s, Rivel appeared together with three offspring as "Charlie Rivel and the Charivels" . In 1981 he undertook his farewell tour, when the Circus Krone , Munich his children Juanito and Paulina occurred. After the death of his wife Carmen, Rivel married Margarita Camas, 28 years younger than him, in June 1982, whom he had already met in Cubelles in 1977.

In May 1983 he suffered a stroke from which he did not recover: he died on July 26th in Sant Pere de Ribes.

Typical for Charlie Rivel were the red square nose, the red fringe of hair around the "bald head" and his floor-length red costume, which is sometimes described as "sausage skin".