The title of this article is ambiguous. Further meanings are listed under Hans Albers (disambiguation) . 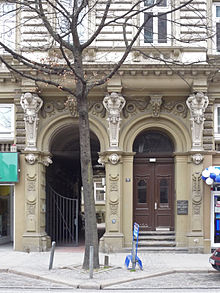 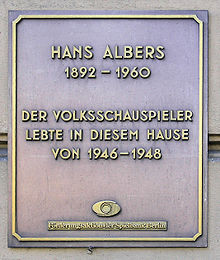 Hans Albers (right) in his star role as Liliom in the Hebbeltheater in Berlin , 1946

Statue on the Hans-Albers-Platz in Hamburg 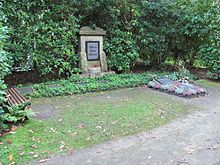 Hans Albers was born as the son of the butcher Philipp Albers (called "Schöner Wilhelm") and his wife Johanna Dorothea, née Rathjen, in the long row 71 in Hamburg-St. Georg was born as the youngest of six children. He attended the Uhlenhorster Oberrealschule , but was expelled from the school as a quarterback after a physical conflict with a beating teacher . He experienced something similar in the St. Georgs Realschule . Albers found more recognition as an enthusiastic young athlete in the Alster swimming club. As a result, he began an apprenticeship as a businessman and worked in a silk company in Frankfurt am Main.

He began his theater career at the New Theater there , initially with moderate success. Without his father's knowledge, he had taken private acting lessons with secret financial support from his mother. In the 1912/13 season he made his debut at the Stadttheater Güstrow , mostly in the role of the adolescent lover . His salary was between 60 and 120 marks a month, and he had to help out with stage work.

After being drafted into the army in 1915, Hans Albers was seriously wounded as a soldier in the 31st Reserve Infantry Regiment on the Western Front during World War I. He was taken to a Wiesbaden hospital, where it was possible to restore his shot leg. According to his own words, he had vehemently resisted an impending amputation. After his release he appeared in antics , comedies and operettas at the Residenztheater there .

Albers lived in Berlin from 1917. After the First World War he played mainly comic roles in operettas and comedies at various Berlin theaters and at the Komische Oper . From the mid-1920s he established himself with singing and acrobatics as a leading actor in revues by Rudolf Nelson, among others . His first big success was spoken theater-1928, the role of the waiter Gustav ne'er-do in the play The criminals of Ferdinand Bruckner . His teacher and sponsor was the Jewish actor Eugen Burg .

After over a hundred silent film roles, he starred in one of the first German sound films in 1929 , The Night Belongs to Us and shortly afterwards alongside Marlene Dietrich in The Blue Angel . The role of the artist Mazeppa in this film was his only supporting role after the introduction of the sound film. His fellow actor and then chairman of the supervisory board of the Tobis Tonbild Syndicate, Emil Jannings , ensured that crucial scenes with Albers were cut out of the finished version.

In 1930 he shot the comedy Hans in allen Gassen under the direction of the later President of the Reichsfilmkammer Carl Froelich . In the last years of the Weimar Republic , Hans Albers was again to be seen in major theater roles in addition to very successful films such as Bombs on Monte Carlo (1931) or FP1 does not answer (1932). B. together with Fritz Kortner in Rivalen or in Ferenc Molnár's Liliom . The latter became his star role since its first performance on January 7, 1931 at the Volksbühne Berlin, which he played until the play was canceled by the NSDAP (since Molnár was Jewish) and then again after the Second World War ; here he sings the fairground exclamation song Come on the swing, Luise .

After the seizure of power by the NSDAP he was urged to separate from his partner, the actress Hansi Burg , the daughter of his Jewish mentor Eugen Burg. After a while, Albers gave in and officially separated from her, but continued to live with her on Lake Starnberg . There he owned a villa with a 27,000 m² property in Garatshausen near Tutzing since 1933 .

Albers continued to make films successfully, although he no longer went to the theater until 1945 in order to evade the influence of the National Socialists. For Hansi Burg, however, Germany became too dangerous. Albers wanted to know that his partner was safe and made sure that she emigrated to England via Switzerland in 1939. She returned to Garatshausen in 1946. Albers separated from his girlfriend and lived with Hansi Burg in Garatshausen until his death in 1960. Albers remained unmarried throughout his life.

The UFA crime comedy Der Mann Who Sherlock Holmes was from 1937 , in which Albers played the leading role together with Heinz Rühmann . The duet of the two with the title Yeah, my gentlemen ... became a box office hit. In the year the war broke out in 1939, the water project for Canitoga was completed, an immensely expensive adventure film, from which a real hit with the song Goodbye Johnny emerged. In 1943, the Münchhausen color film, which was produced at great expense for the 25th anniversary of the UFA, had an extraordinary public success.

On the one hand, Hans Albers had a very distant relationship with the National Socialists: he never appeared on the side of high-ranking NSDAP functionaries and refrained from accepting an acting award from Joseph Goebbels . Nevertheless, he was highly valued by Goebbels as a crowd puller, so he was able to demand and receive very high fees and was put on his list of those who were gifted by God .

Propaganda films with the participation of Hans Albers were refugees (1933) and executioners, women and soldiers (1935) as well as the propaganda film Carl Peters produced by him about the African colonialists of the same name from 1941. In 1943 he made the color film together with Ilse Werner under the direction of Helmut Käutner Great freedom No. 7 . Filming had to be continued in Prague because of the bombing raids on Potsdam ( Babelsberg ) and Berlin , where filming had started . However, due to its gloomy mood, the film was only shown publicly after the end of the war, apart from its premieres and other screenings in Prague. The German premiere in September 1945 in Berlin was the first film premiere after the Second World War.

Shortly before the end of the war, filming began on Shiva and the Gallows Flower , a color crime film that could no longer be completed. The film was shot in Prague under the direction of Hans Steinhoff . Revolts and the approach of the Red Army led to the abandonment of the shooting and the flight of the staff and actors to the west.

Albers' first production after the end of the war was the film, shot in 1947 and set in Berlin ... and above us the sky , which shows him as a returnee from the war. After the Second World War, Albers was able to continue his film career, including in the very successful film Auf der Reeperbahn at half past twelve with Heinz Rühmann. A high point of his filmmaking in the 1950s was the literary film adaptation Before Sunset by Gerhart Hauptmann with Annemarie Düringer and Claus Biederstaedt at his side. Films like The Great Bomberg or The Heart of St. Pauli followed .

He was also very successful with his songs. In them he already stood since 1932 as a warhorse ( Fly With me the sun ), as a sailor (The wind and the sea) and as a minor (Come on the swing, Luise) . A major problem in the 1950s was his Alcohol sickness, which he always knew how to cover up.

In 1957 he played old Karl Knie in the musical version of the tightrope walker piece Katharina Knie by Carl Zuckmayer in the State Theater on Gärtnerplatz in Munich . With this role he left the stage in 1960. In 1958, two years before his death, Hans Albers could still be seen in three films: Der Greifer (a crime film), Der Mann im Strom (a literary film based on Siegfried Lenz ) and 13 Little Donkeys and the Sonnenhof . His last film, No Angel Is So Pure , was released in 1960. He closes with the sentence spoken by Hans Albers: “This is the end”.

At the age of 68, Hans Albers collapsed with severe internal bleeding during a theater performance and died three months later on July 24, 1960 in a sanatorium in the Kempfenhausen district of Berg am Starnberger See. He was cremated and the urn was buried in the Ohlsdorf cemetery in his native Hamburg.

Almost all hits recorded by Albers come from the soundtracks of his films; in particular the music to Große Freiheit No. 7 (1943/1944), Wasser für Canitoga (1939) and FP1 does not answer (1932) helped him to gain popularity as a singer. Albers' greatest musical success was his version of the old South American song La Paloma, recorded for Große Freiheit Nr. 7 , with a German text by Helmut Käutner .