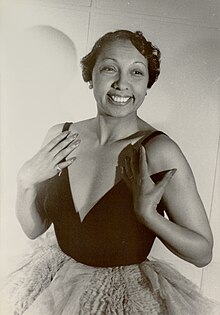 Josephine Baker was born out of wedlock to washerwoman Carrie McDonald and Jewish drummer Eddie Carson in St. Louis, Missouri. She grew up in poor conditions. Her mother called her Tumpie , a modification of Humpty Dumpty . Her brother Richard was born in 1907 and the father left the family in the same year. In 1911 the mother married a second time, and Josephine had two half-siblings from this marriage. She and her brother Richard were adopted by their stepfather Arthur Martin. On July 2, 1917, Baker witnessed a pogrom in East St. Louis in which, according to various reports, up to a hundred people, mostly African-Americans , were murdered. This experience shaped her so much that she later became a committed fighter against racism. At the age of 13, she was married by her mother to Willie Wells, who was many years her senior. In the same year she made her first appearances as an extra at the Booker Washington Theater in St. Louis. The marriage to Wells only lasted a few weeks. In 1921 she married the train attendant Willie Baker, whom she left in 1925, but kept his last name throughout her life.

Josephine Baker in the attitude of a burlesque showgirl, 1927 Photographer: Lucien Walery

Her career began at the age of 16 at the Standard Theater in Philadelphia . Then she went to New York and got an engagement in a vaudeville troupe, with which she toured the USA for half a year. From 1923 to 1924 she was a chorus girl in the musical comedy Shuffle Along in New York and then appeared in the black revue The Chocolate Dandies . In New York, Baker made the acquaintance of the German poet Karl Gustav Vollmoeller, who was extremely popular and well-known in the USA at the time . He had worked as a talent scout and promoter for dancers and actresses for many years. He brokered Baker engagements in Berlin and Paris. After appearances at the New York Plantation Club, she signed up for La Revue Nègre , which premiered on October 2, 1925 in Paris at the Théâtre des Champs-Elysées .

With her dance, she took the Paris audience by storm, which was the first to see a Charleston . André Levinson wrote enthusiastically: "Josephine is not a grotesque black dance girl anymore, but those Black Venus, the poet Baudelaire . Haunted in his dreams" Further stations with La Revue Nègre were Brussels and where on January 14, 1926 in Berlin, Nelson Theater am Kurfürstendamm first appeared in Germany. In her nude dances in the Nelson Revue , she usually performed without the banana apron.

On the occasion of her engagement in Berlin, Baker was a frequent guest in Karl Gustav Vollmoeller's Berlin residence on Pariser Platz . How things went at these meetings, Harry Graf Kessler recorded in some of his diary entries, for example on February 13, 1926: “At one, after my guests had just left, Max Reinhardt called , he was at Vollmoeller, they both asked me could I still get there? Miss Baker was there, and now wonderful things were to be done. So I went to Vollmoeller's harem on Pariser Platz and found, in addition to Reinhardt and Huldschinsky, among half a dozen naked girls, Miss Baker, also completely naked except for a red gauze apron , and little Landshoff (a niece of Sammy Fischer ) as a boy in tuxedos (...) The naked girls were lying or prancing between the four or five men in tuxedos, and little Landshoff, who really looks like a beautiful boy, danced modern jazz dances to the gramophone with Baker. ”In 1926 and 1927 she was the one Star of the Folies Bergère . She appeared in two revues by Louis Kenarchand in which she danced with her famous banana skirt. 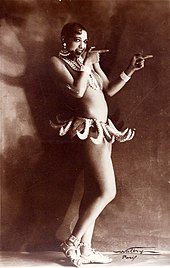 On June 3, 1927, she married the Sicilian stonemason Giuseppe Pepito Abatino, who had previously worked artistically in her shows. Abatino, who pretended to be Count Di Albertini, then also became Josephine Baker's manager. For reasons of publicity, Baker was the first black American woman to carry a European title of nobility. The Austrian architect Adolf Loos designed a house for Josephine Baker with a black and white striped marble facade in 1928, but it was never built. Because of her incredible costumes and dances, she was banned from performing in Vienna , Prague , Budapest and Munich , which made her all the more interesting for the audience. On board the passenger steamer Giulio Cesare , she sang in the cabin for Le Corbusier , who drew her naked and then demanded new buildings based on the spirit of her dance; after the encounter he built the " Villa Savoye ".

After a tour through Eastern Europe and South America, she mainly appeared as a singer. J'ai deux amours , Aux Îles Hawai and Pretty Little Baby were among her most successful songs. She played, among other things. the leading role in the films La Sirène des Tropiques 1927, Zouzou 1934 and Princesse Tam-Tam 1935. With the Comedy Harmonists , the exile group of Comedian Harmonists , she recorded the song Sous le Ciel d'Afrique in Paris in 1935 . She quickly became the most successful American entertainer in France, whereas in the USA she suffered from racism . In 1936 she failed in the USA with a show by the Ziegfeld Follies , from which she suffered greatly. On November 30, 1937, Josephine Baker received French citizenship through her marriage to the industrialist Jean Lion; the marriage with Lion was divorced in 1942.

The Second World War saw Baker in France and North Africa. At the beginning of the war, as the holder of a pilot's license , she joined the Infirmières Pilotes Secouristes de l'Air (IPSA), a corps of flying nurses that assisted the French Red Cross. After France's defeat, sealed in the Compiègne armistice, in June 1940, she worked for the Resistance and the secret service . In May 1944 Baker went to the Air Force of the Free France and was there propaganda officer, with the rank of Sous-Lieutenant ( sub-lieutenant ). In 1957 she received the Croix de Guerre for her services and was accepted into the Legion of Honor at the same time . The official award ceremony did not take place until 1961, by the former chief of the French Air Force, General Martin Valin.

In 1947 she married her orchestra leader Jo Bouillon . They stayed together until 1957, and that fifth marriage ended in divorce in 1961. Although she lived in France, she supported the American civil rights movement as early as the 1950s . She protested against racism in an unusual way by adopting twelve orphans of different skin colors: the boys Akio ( Koreans ), Janot ( Japanese ), Luis ( Colombians ), Jarry ( Finns ), Jean-Claude (“ Canadians ”, actually French, 1943 –2015), Moïse ( French and Jew ), Koffi ( Ivorian ), Mara ( Venezuelan ), Noël (French) and Brahim ( Algerian ) as well as the girls Marianne (French) and Stellina ( Moroccan ). In this way she founded a family (referred to by her as the "rainbow family") with whom she lived, sometimes under difficult financial conditions, at Les Milandes Castle in Perigord in the south of France . In 1956 she announced her retirement from the stage, but made her comeback in 1961 and performed successfully at Carnegie Hall in 1973 . 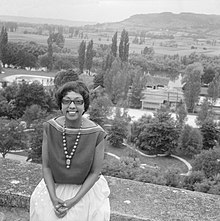 In 1960 Josephine Baker became a member of the Freemasons in the Loge Nouvelle Jérusalem of the Grande Loge Féminine de France .

On April 8, 1975, the premiere of her show Joséphine was in the Paris "Bobino" theater, where she celebrated her 50th anniversary on the stage. There is an audio recording of this last show, which was released on a double LP and later also on CD. Shortly thereafter, she suffered a cerebral haemorrhage , from the consequences of which she died on April 12 in Paris. At the Catholic funeral at La Madeleine in Paris took Grace of Monaco in part and the French State Secretary for Culture Michel Guy. She was buried in the Cimetière de Monaco in Monaco and honored with a French military funeral. Baker is to be transferred to the Paris Panthéon on November 30, 2021 ; she is the first black woman to be honored with it.

Josephine Baker wrote several autobiographies , each with a different story about her career and family.