from Wikipedia, the free encyclopedia
This is the spotted version , flagged on July 6, 2020 . There is 1 pending change that has yet to be viewed.

Military funeral: The coffin of former US President Ronald Reagan is driven through Washington, DC on a gun carriage 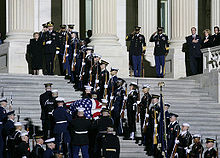 Military funeral: The coffin of former US President Gerald Ford is carried to the Capitol by members of all five US armed forces through an honor trellis with a presented rifle to be laid out in the Capitol .

Burial of fallen German soldiers at the beginning of the First World War.

A funeral with military honors means the organization of a memorial service or a funeral by members of the military . The procedures of such a burial are country-specific and determined according to the respective military traditions . The burial with military honors is usually part of a state funeral in Germany , unless the relatives expressly refuse it.

In Germany, the following are entitled to a burial with military honors:

The military honors at funeral ceremonies are only given at the request of the next of kin of the deceased. If the death occurred in connection with a crime committed by the deceased, or if there is reasonable suspicion of involvement in a crime, no military honors are paid.

The scope of the military ceremonies at a funeral service is specified in a central service regulation. A distinction is made between delegation , small and large military escorts of honor :

The coffin of people who are buried with military honors can be covered by a federal service flag at the request of the relatives so that the eagle points to the right to the head of the deceased. If the person was wearing a uniform, a headgear ( helmet , peaked cap , mountain cap , beret ) is attached to the coffin at the level of the head of the deceased, with an opening facing downwards, the umbrella / edge pointing to the head of the heraldic eagle. Since the coffin with the flag is lowered into the grave according to the German ceremony, a second flag is carried separately for the purpose of handing it over to the bereaved.

An integral part of the process is playing the song of the good comrade when lowering the coffin into the grave or in the case of state acts after it has been placed in the hearse; soldiers present give the military salute .

From 2000 to 2011, the Bundeswehr took part in 68 escorts of honor and 43 delegations to funeral ceremonies for deceased former Wehrmacht members, including Rudolf Witzig , Michael Pössinger and Erich Topp .

As part of a state act, Lieutenant General a. D. Jörg Schönbohm received this honor on February 22, 2019.

The last military / state funeral of the Third Reich , at which the then Reich President Karl Dönitz spoke the last words, took place on May 16, 1945 for the sea ​​captain Wolfgang Lüth, who had died two days earlier .

Until 1945, the military funeral consisted of the funeral procession, as was customary in other countries, in which the coffin was transported on a horse-drawn gun carriage . As honorary signal of the dead were up to 21, depending on the rank salute given such. Sometimes with cannons . 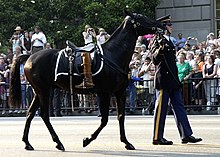 The riderless horse named "Sergeant York" in the funeral procession of Ronald Reagan , with the ceremonial sword on the saddle and the president's boots upside down in the stirrups

It was customary for senior officers to take a riderless horse with them in the funeral procession. It was a saddled horse with the boots tucked upside down in the stirrups . This should symbolize the current lack of leadership of the unit concerned.

Military funerals in other countries 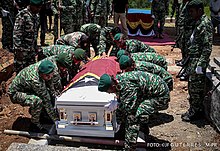 The Roman writer Virgil already describes that in the 1st century BC A fallen helmet and weapons were carried. His comrades carried their weapons upside down. This found its equivalent in the Middle Ages when shields were pointed upwards, as Wolfram von Eschenbach reported in the Parzival around 1200 .