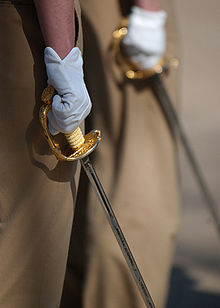 An honor weapon serves as an award for bravery, long honorable service, etc. and was awarded in many armies partly by the chiefs of the regiments , partly by rulers .

These include swords , often of artful workmanship and high material value, captured artillery for generals , rifles , pistols , sabers and other weapons.

In Prussia , deserved postilions have received trumpets of honor since 1827.

The German Kaiser awarded for outstanding achievements in the scientific field, e.g. B. to officers at the war academy , swords of honor and sabers of honor.

The awarding of honorary weapons continued - with interruption - also during the Weimar Republic . For example, Claus Schenk Graf von Stauffenberg (1907–1944) received a saber of honor for excellent performance at the weapons school , in his case the cavalry school .

In the Third Reich ceremonial weapon were also awarded. For example, from 1933 the award of the SS honor dagger and from 1936 the honor sword of the RFSS .

In the NVA , various types of honor daggers and sabers were given to officers, generals and admirals. The honor dagger was engraved by the Minister for National Defense for the graduates of the GDR's officers' college , the best of their year . The NVA honor dagger belonged to the parade uniform , but could also be worn with the starting uniform and with the formal suit.

No honorary weapons are given in the Bundeswehr . But there are efforts to introduce an officer's saber .