Julie Wolfthorn in her studio, 1902

Julie Wolfthorn (also Wolf-Thorn , née Wolf or Wolff , born on January 8, 1864 in Thorn , West Prussia ; died on December 29, 1944 in the Theresienstadt concentration camp ) was a German modern painter, draftsman and graphic artist . As a Jew, she was a victim of the Shoah . Except for a few pictures in the depots of German museums, her extensive work was considered lost for a long time and was not rediscovered until the beginning of 2000. 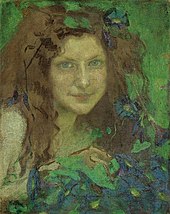 Portrait of the sculptor Georg Wolf , 1905

Carola Neher in the play by Noël Coward Fallen Angels , 1929

Julie Wolfthorn was born as Julie Wolf (f) as the youngest of five children of a middle-class Jewish family in Thorn; the sculptor Georg Wolf was one of her four siblings . Wolfthorn was an orphan when he was six years old . She and her four siblings grew up with relatives. She spent the summers in Ferch am Schwielowsee in the house of her cousin Olga Hempel. From 1890 she studied painting and graphics in Berlin and from 1892 at the Paris Académie Colarossi under Gustave Courtois and Edmond Aman-Jean . In 1893 she returned to Berlin and lived for decades in the no longer existing house at Kurfürstenstrasse 50. In 1895 she attended the drawing school for women led by Curt Herrmann . In 1897 she spent the summer in the Worpswede artists' colony , but she didn’t win over the atmosphere for her. The painter Paula Modersohn-Becker , who lives there, called her a “woman in trousers” in her diary.

In 1898 she became a founding member of the Berlin Secession as one of four women working in art , which she left with Max Uth , Hugo Lederer and others because she felt disadvantaged. Their request two years later to reverse this was not granted. Until 1913 she exhibited regularly in the Berlin Secession. In 1898 she was a member of the " Association of Artists and Art Friends Berlin ". At the turn of the century she was one of the few women who regularly received orders from the Jugendstil magazine Jugend , for which she created illustrations and covers.

In 1904 Wolfthorn married the art historian and critic Rudolf Klein-Diepold (1871–1925). In 1905 Julie Wolfthorn signed a petition with over 200 female artists demanding admission to the Prussian Academy of the Arts , which was rejected by the academy director Anton von Werner . In 1906 her name can be found in the list of members of the German Association of Artists . In the same year she and Käthe Kollwitz founded the exhibition group “Association of Visual Artists”, in 1912 she and Käthe Kollwitz were elected to the board and jury of the Secession, in 1927 she joined the Hiddensoer Künstlerinnenbund . At that time, women artists were contemptuously referred to as " painters ".

In 1933, in the early days of National Socialism , the Hiddensoer Künstlerinnenbund was dissolved. In 1933, as a Jew, she was excluded from the Secession board with Fanny Remak , who emigrated to England. She stayed in Berlin and worked with the Kulturbund Deutscher Juden , which was banned in 1941. The employees were arrested and the association's assets were confiscated.

On October 28, 1942, Julie Wolfthorn was born at the age of 78 together with her sister Luise Wolf with the “68. "Age Transport in the by the Nazis called Terezin ghetto deported . There she drew as far as she could under the circumstances. She survived here for two years and died a few days before her 81st birthday.

The Julie Wolfthorn Circle of Friends has been concerned with the artist's life and work since it was founded in 1998 . The name of a new street at Berlin's Nordbahnhof has been reminiscent of Julie Wolfthorn since 2005 . A board on the square of the former Luisen Lyceum at Ziegelstrasse 12 names her as a prominent student. In 2002, 50 stumbling blocks were set for her and her sister in front of the Kurfürstenstrasse building. There has also been a stumbling block in front of her summer house in Vitte on the island of Hiddensee since 2011.

Julie Wolfthorn was best known for her portraiture. She portrayed Ida Dehmel , Richard Dehmel , Hedda Eulenberg , Gerhart Hauptmann (in a double portrait with his wife Margarete), Gabriele Reuter , the family members of the writing and translating couple Hedwig Lachmann and Gustav Landauer , the family of the architect Hermann Muthesius , the doctors Salomon Neumann and Carl Ludwig Schleich , the opera singer Irmgard Scheffner , many actresses such as Tilla Durieux or Carola Neher - and other famous contemporaries, mainly from Berlin society, including a particularly large number of committed women. Her further focus was landscape painting , which she often combined with people in it (including in Abend in der Mark , shown in 1904 at the Munich annual exhibition in the Glaspalast , or Mädchen im Walde , purchased by the Kunsthalle Kiel ).