Jugend - Münchner Illustrierte Wochenschrift für Kunst und Leben was an art and literary magazine founded by Georg Hirth and Fritz von Ostini , which appeared in Munich from 1896 to 1940.

The youth became the namesake of the Art Nouveau style , which shows how important the magazine was for the style-historical debate of early modernism in Germany. Nevertheless, the content and orientation of the youth cannot be reduced to the label "Art Nouveau" even in their heyday. In addition to modern illustrations and ornaments of Art Nouveau , other styles also played a role, above all impressionism . The Scholle artists shaped the magazine's artistic appearance well into the 1920s.

The magazine was also satirical and culturally critical. The main targets of the attack were the “muckertum” (keywords anti-modernist oath , Lex Heinze ), the influence of the churches, especially the Catholic ones (keyword ultramontanism ), and especially the political right in the center party . In addition, the magazine supported progressive currents that were typical of the Empire in the Wilhelmine era, such as the Bund für Mutterschutz .

The contribution made by young people to the literature of early modernism, on the other hand, remained modest - in stark contrast to the competing company Simplicissimus from the Albert Langen publishing house, also founded in 1896 .

From the First World War , the youth increasingly became a German national and Bavarian homeland magazine; there had already been a tendency towards this in the early years. From the mid-1920s, the magazine was opened again to artists of the younger generation, including George Grosz , and printed texts by Kurt Tucholsky and Erich Kästner .

After 1933, the magazine adapted to the völkisch line of the National Socialists . Nevertheless, it was discontinued in 1940. 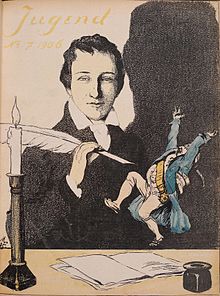 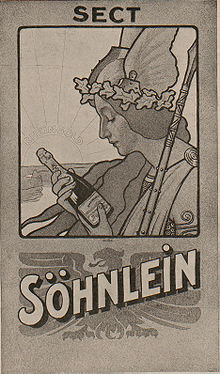 Not all of the image material found among young people was specifically produced for the magazine. So there are z. B. “Purchases” of pictures by the “ painter princes ” Böcklin , Lenbach and Kaulbach or from Thomas Theodor Heine and Giovanni Segantini . On behalf of the youth , among others, painted and drew:

Among other things, wrote for the youth:

Commons : The youth  collection of pictures, videos and audio files