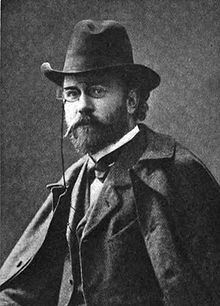 Both the father and the grandfather Wilhelm von Gumppenberg (member of the Bavarian state parliament, landowner and major) were active in literature. The father wrote mostly dialect dramas and poetry, the grandfather fiction works and funny puppet pieces.

Gumppenberg received training at the Royal Pagerie in Munich's Maximilianeum , where he made his first attempts at poetry. After the Pagenschule and the Abitur at the Wilhelmsgymnasium in Munich , he began studying philosophy and literary history in Munich in 1885. For reasons of a better livelihood, however, Gumppenberg decided three years later to take up legal studies. He finally dropped out of law school to work as a freelance writer and journalist. In 1894 he married Charlotte Thursday (* 1870) in Berlin, who died in 1895.

From 1901 to 1909 Hanns von Gumppenberg was a theater critic for the Munich Latest News . From 1910 to 1913, together with Alfred Auscher, he was the editor of the new artistic-literary magazine Licht und Schatten. Black and white art and poetry weekly . He then worked as an author and editor for the magazine Jugend until his death . From 1902 Gumppenberg also worked regularly as a translator of foreign poetry, for example Swedish poems by Bellman, Fröding or Karlfeldt.

After 1889 Hanns von Gumppenberg moved in the circles of the Munich modernists, to which Michael Georg Conrad and his followers belonged above all . Together with Georg Hoffmann, Julius Schaumberger and Otto Julius Bierbaum , he founded the Society for Modern Life in 1890 . In 1897 he married Helene Bondy (1868–1954), the daughter of the factory owner Ignaz Bondy and the Austrian suffragette Ottilie Bondy .

In 1901 he became a co-founder of the Munich cabaret Die Elf Scharfrichter as the author of poetry and drama parodies under the pseudonym Jodok . His parodic work finally made him known. Gumppenberg's collection of parodies Das Teutsche Dichterross , 1st edition 1901, had a total of 14 editions. With the main part of his work - mostly ideological and ideological dramas - he was unsuccessful.

The First World War and the inflation brought Gumppenberg into financial difficulties and since 1922 his health was badly damaged. On March 29, 1928, he died of a heart condition in Munich.

The Gumppenberg estate is in the Monacensia literary archive of the city of Munich.