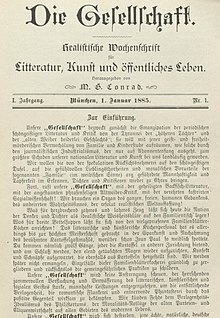 Conrad was the oldest son of a farmer from Gnodstadt (today part of Marktbreit ) near Ochsenfurt . He attended the teachers' seminar in Altdorf near Nuremberg to study pedagogy . Later the subjects philosophy and modern philology were added. Conrad later moved to the universities of Geneva , Naples and Paris . He graduated in 1868 with a doctorate to the Dr. phil off.

In the same year he went to Geneva for two years to teach there as a teacher at the German-Lutheran school. There he was accepted into the Masonic lodge L'union des coeurs in February 1870 . In 1870/71 he committed himself to Italy , where he lived until 1878. There he was u. a. as co-founder and master of the chair of the German-speaking lodge Pestalozzi as a Freemason. In 1878 he moved to Paris, where he stayed for five years and worked as a lecturer at the Polyglotte Institute . During the last year of his stay in France, he mostly worked in the Paris office of the Frankfurter Zeitung .

In 1883 the company moved to Munich. Here Conrad soon advanced to become a central figure in the naturalistic movement. In 1885 he founded the journal Die Gesellschaft . In 1891 Conrad was elected to the board of the Society for Modern Living , designed by Julius Schaumberger . He was responsible for the club newspaper Moderne Blätter and for the free stage . This supplemented his publication of the society , in which he wrote numerous essays , editorials and reviews , especially for German literature that was renewed in the sense of realism and naturalism, but also society. He was close to the painter and life reformer Karl Wilhelm Diefenbach , for whom he vigorously campaigned several times, and also supported his temporary adept Gustav Arthur (Gusto) Gräser , the co-founder of the dropout settlement Monte Verità near Ascona.

In 1887 Conrad married the Munich court actress and writer Marie Ramlo, who also published under the name Marie Conrad-Ramlo .

Michael Georg Conrad died on December 20, 1927 in Munich at the age of 81. His grave is in the Gnodstadt cemetery.