He was born as the son of Rittmeister Philipp Freiherr von Habermann and his wife Pauline. Countess Leutrum von Ertingen was born in Dillingen on the Danube. In 1858 he moved with his family to Munich and attended the Ludwigsgymnasium . In 1862 he became a student at the city's most distinguished grammar school, the Wilhelmsgymnasium , and took drawing and painting lessons, among other things. He began his law studies in 1868, but studied with little enthusiasm. His interest lay in painting.

“Even as a boy I drew a lot, in all textbooks; I was always drawn to the phenomena of the environment. I always liked to lie around in the country, in hidden corners that nobody liked, dreaming and seeing pictures. "

In 1870 he was an officer in the Franco-Prussian War in France . In the same year he also painted his first painting, “Ruth and Boaz, reading corn” . In Ingolstadt in 1871 he was the supervisor for artists who made pictures of prisoners of war there and probably made the decision there to give up his law studies and become a painter.

When he returned to Munich, he took lessons from Herrmann Schneider and was admitted to the Academy of Fine Arts on November 30, 1871 . In 1874 he became a student in the master class of the director of the academy, the history painter Karl Theodor von Piloty . He joined the Munich artists' cooperative in 1878 and exhibited his pictures for the first time. He finished his studies in 1879 and moved into a studio in the immediate vicinity of the painter Bruno Piglhein at Findlingstrasse 28. 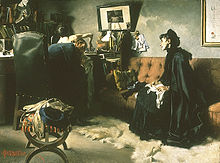 With Bruno Piglhein and Fritz von Uhde he opened a private school of painting in 1880. This had to be closed again due to a lack of students. In the same year he joined the artists' association Allotria . The art scene became aware of him at an exhibition with the picture “A Problem Child” . For this picture he received a gold medal in the Glass Palace .

At the International Art Exhibition in Munich in 1897 he was awarded the title of professor by Luitpold von Bayern in recognition of the portrait of "Salome" .

In 1928 Habermann retired to his studio. He fell ill and rarely left the house.

Hugo von Habermann the Elder Ä. was a board member in the German Association of Artists . 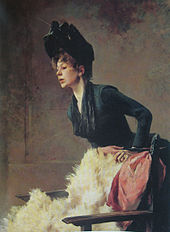 Portrait of a Young Lady, around 1889