The Glaspalast was an exhibition building built in 1854 on the site of the Old Botanical Garden in downtown Munich , which burned down in 1931.

After other European metropolises, King Maximilian II of Bavaria decided in 1853 to hold the First General German Industrial Exhibition in Munich .

The original plan was to erect the building on Maximiliansplatz. However, the decision of the responsible commission fell on an area near the train station. According to plans by the architect August von Voit , the building was erected in 1854 in the north of the Old Botanical Garden near the Stachus . 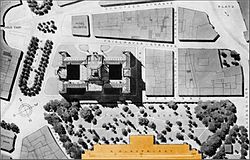 Building situation with a glass palace and a palace of justice 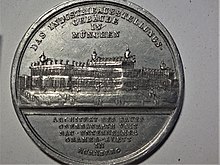 Glaspalast of Munich on medal from 1854

During the construction of the Schrannenhalle, completed in 1853, and the winter garden of the Munich Residence planned by Franz Jakob Kreuter for King Maximilian II between the Königsbau and the National Theater in 1854 (the construction of which was directed by August Voit; not preserved), glass and cast iron constructions were used. so that there was already experience with this modern type of building.

The first drafts for the building were - similar to the London model  - relatively complex. Due to the short construction time, the concept was greatly simplified by Voit in view of the short construction period available and largely standardized components were used. A conventional construction method was not possible anyway, as such a large amount of building material could not be procured and installed in the given time.

The elongated rectangular glass palace, in the form of a five-aisled and two-storey hall with a transept in the middle and rectangular extensions at the ends of the nave, had a length of 234 meters and was 67 meters wide; the height was 25 meters.

The structure was built entirely from glass and cast iron, and load-bearing masonry could be completely dispensed with. The 1700 tons of prefabricated iron parts were manufactured by Cramer-Klett from Nuremberg . At that time, the Cramer-Klett company was a leader in the field of iron structures in southern Germany; the company had previously built the Großhesseloher Bridge in Munich and Maximilian II's winter garden in this construction method. The glass was produced, among other things, in the Schmidsfelden glassworks, which is still working traditionally .

Construction began on December 31, 1853, and the foundation was completed after exactly two months. The cast iron structure was erected three months later, and on June 7, 1854, assembly of the 37,000 glass panels began. The entire construction time was only six months, the costs amounted to 800,000 guilders . 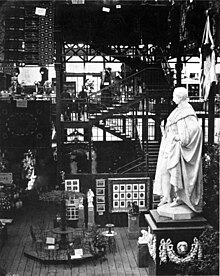 Only three years after the completion of the Crystal Palace in London, which served as a model, the First General German Industrial Exhibition was opened on July 15, 1854 in the newly built Glass Palace. The opening was overshadowed when first the staff and later the exhibition guests fell ill with cholera .

Oskar von Miller had a direct voltage overhead line built from Miesbach to Munich . With an electric pump for an artificial waterfall, Miller demonstrated the possibility of transmitting electrical energy over great distances.

The Glass Palace as the venue for art exhibitions 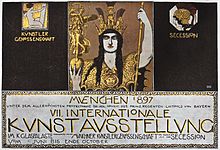 Poster for the VII International Art Exhibition in Munich, by Franz von Stuck 1897

From 1889 the glass palace was used almost exclusively for art exhibitions. These developed into a forum as well as a location for the international art trade.

In the 1880s, the Glaspalast not only fulfilled its important functions in the artistic, social and economic life of the city of Munich, but also established Munich's reputation as the “city of art and culture” and thus enabled the state capital to gain the reputation of an exhibition and trade fair location as well as a congress city.

During the planning it was assumed that the hall would be converted into a greenhouse after the industrial exhibition. In the following years, however, the glass palace was mainly used for international art exhibitions. It was also a venue for artist festivals. 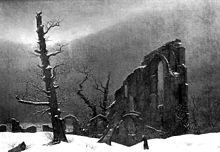 The Winter (Monk in the Snow), burned painting by Caspar David Friedrich

On June 6, 1931, the Munich Glass Palace burned down completely, like its London model five years later. The alarm went off at 3:30 a.m. In the morning all that remained of the building was smoking debris, molten glass, and bent steel beams. The cause was initially assumed to be self-ignition of oil-soaked cleaning wool, but an expert report later determined arson as the cause.

Over 3000 works of art were irretrievably destroyed in the fire, including the complete, 110 paintings, special exhibition " Works of German Romantics from Caspar David Friedrich to Moritz von Schwind ".

Another 1,000 works by contemporary artists at the time had been badly damaged and only 80 art objects could be recovered intact.

See also : List of works destroyed in the fire of the Munich Glass Palace

The daily edition of the Neues Wiener Tagblatt reported in a telegram on June 7th, 1931: The fire of the Munich Glass Palace , p. 4:

“The fire in the Glass Palace is one of the greatest catastrophes that has destroyed Europe's works of art. In Germany, not so many works of art have been destroyed at once since the Thirty Years War as by this fire. Of the 2,820 paintings, graphics and sculptures exhibited, only 80 have been saved. The damage is estimated at 25 to 30 million marks . [...] A special tragicomic is the fact that in a neighboring storage shed the pictures by the artists that were rejected by the jury and were not touched by the fire were stored. Only speculations are known about the cause of the fire. For the time being there is a rumor of an act of revenge by artistically dissatisfied, but this cannot be confirmed by anything. The latest investigations have revealed the possibility that the fire may have broken out in the joinery, where work was still going on the day before. 20 firefighters were injured during the rescue work. General director Zimmermann, who tried his life to rescue valuables from the 75 completely burned-out halls, first had to be forcibly held back by the police. In the meeting in the Ministry of Education that ended in the afternoon, it was decided to immediately initiate an aid action on the occasion of the national misfortune through a public appeal to the entire German people [...] "

After the fire, the glass palace was to be rebuilt in the same place. These plans were in 1933 with the takeover of the Nazis abandoned. Instead, the House of German Art was opened in 1937 . The glass palace fountain , which has remained undamaged, stands today on Weißenburger Platz in the Haidhausen district .

In 1936 the old botanical garden was redesigned and a small exhibition building was erected, which was destroyed in the Second World War. After the war, the exhibition pavilion was rebuilt by Munich artists and is now used under the name Kunstpavillon München . The Park Café , a building used as a restaurant and bar with a beer garden in front of it , now stands on the site of the Glass Palace .