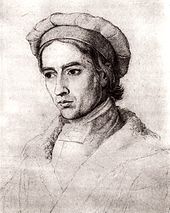 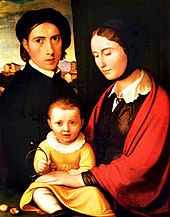 Self-portrait with family, around 1820, Behnhaus 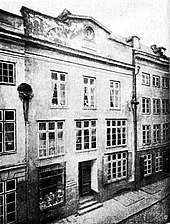 Johann Friedrich Overbeck (born July 3, 1789 in Lübeck , † November 12, 1869 in Rome ) was a German painter , draftsman and illustrator . He is considered the protagonist of Nazarene art .

Overbeck had always enjoyed drawing, and an old artillery sergeant named Mau , who also taught drawing, was his first teacher. On Michaelmas Day 1803 he came to the Prima of the Lübeck Katharineum .

In 1804, which can be regarded as the year of Overbeck's artistic birth, when he was not yet fifteen, he managed to get his father to take him as a student to the painter Joseph Nicolaus Peroux , who was living in Lübeck at the time . It was this who kindled the first love fire for divine art in him .

On March 6, 1806, leaving his parents' home and thus Lübeck forever, he moved to Vienna to continue his studies at the Academy of Fine Arts . Heinrich Friedrich Füger taught there . Dissatisfied with the classicism taught at the academy , Overbeck broke off his studies there in 1810 and moved to Rome with Franz Pforr and Ludwig Vogel .

As early as 1809 in Vienna, the friends founded the Lukasbund based on the example of the medieval guilds of St. Luke , a group of artists who dedicated themselves to the renewal of art in the spirit of Christianity through the rediscovery of old Italian and German art. They were joined by Philipp Veit and Peter Cornelius . They lived in a monastic community in Sant'Isidoro on the Pincio in Rome . Overbeck converted to the Roman Catholic Church in April 1813 under the influence of the later Cardinal Pietro Ostini .

Her designation as Nazarenes because of her hairstyle was initially meant mockingly, but the term “ Nazarene art ” became common. In 1816/17 he had his artistic breakthrough with the painting of the Casa Bartholdy, the residence of the Prussian ambassador Jakob Ludwig Salomon Bartholdy (painting by Overbeck, Cornelius, Veit and Friedrich Wilhelm von Schadow with frescoes on the legend of Joseph , now in the Alte Nationalgalerie , Berlin) . 1817–1828 he designed the Casino Massimo (painted by Cornelius, Veit and Julius Schnorr von Carolsfeld , who lived with August Grahl in the Palazzo Caffarelli as a guest of the Prussian ambassador von Bunsen ). In 1826 Overbeck turned down the offer of the Bavarian King Ludwig I to take on a professorship at the Academy of Fine Arts in Munich , as well as a corresponding offer from the Düsseldorf Art Academy . In 1829 he also turned down the offer to manage the Städel Art Institute in Frankfurt am Main. Adored as a patriarchal figure by friends and numerous students, filled with deep faith, the "Catholic internationalist" (Jens Christian Jensen) held on to the conservative ideal of the early years until his death, even as the religious painting of the late Nazarists long ago through post-romanticism and realism was outdated. A personal visit by Pope Pius IX proves his appreciation in church circles . in Overbeck's house in Rome. In addition, Overbeck belonged to the painter Johann Michael Wittmer , the doctor Clemens August Alertz and others on the board of the arch-brotherhood " Campo Santo Teutonico " in Rome. His godchild and son-in-law, the Roman sculptor Karl Hoffmann (1816–1872), created the epitaph Overbeck in the church of San Bernardo alle Terme in Rome, where he was buried.

Under Anton de Waal , the Arch Brotherhood tried to transfer the body to Campo Santo, where Overbeck's wife Anna (around 1790-1853), her two daughters, who died early, and their son († 1840) were buried.

With Peter Cornelius Overbeck is one of the most important representatives of the attempt to renew German painting out of a religious spirit in the 19th century. Overbeck's work and his role as the leader of the Nazarenes has increasingly turned interest in recent decades, recognizable in a number of publications and larger exhibitions in Frankfurt 1977, Rome 1981, Munich 1984 and Lübeck 1989. His work is one of the main focuses of the Lübeck Museum Behnhaus .

“Schlossers sent me stupendous things from Cornelius and Overbeck. The case occurs for the first time in the history of art that significant talents want to educate themselves backwards, to return to their mother's lap and thus to establish a new art epoch. "

“Knight Friedrich Overbeck! Greetings to the beloved Son and apostolic blessings. We know how dutiful you are, how excellent you are in the art of painting ... No less do we know about your extraordinary beliefs and skills, all of your talents that may come together when you complete the design of the work. Most of all, we care about everything that promotes people's faith. We write this to you so that you will be spurred on to keep up your enthusiasm for the work ... In the meantime we humbly request God, the source of all good gifts, that he may always be graciously close to you in his divine grace. We assure you of our fatherly love and give you, beloved son, our apostolic blessing. "

1866 second version for the Antwerp Academy of Arts