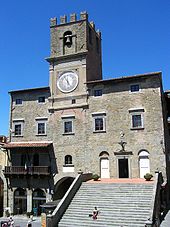 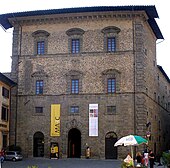 The Palazzo Casali, seat of the museum.

Cortona is an old city that, along with Arretium and Perusia, belonged to the Capita Etruriae populorum . Since the 17th century, there has been a strong increase in interest in ancient history and artistic legacies. Above all, bronzes and painted vases were collected in increasing numbers and over time sparked a great deal of enthusiasm for the Etruscans, an Etruscheria . On December 29, 1726, eleven patricians from Cortona , including Ridolfino Venuti , Bartolomeo Buoni, Niccolò Marcello Venuti , Cristoforo Capulli, Francesco Cattani, Piero Antonio Laparelli, Giorgio Baldelli and Niccolò Vagnucci, came together to form a community for the purchase of scientific books that Società per la compra di libri to set up. The community should help systematically research the history of the city. The spectrum of the company was greatly expanded by an extensive donation from Abbate Onofrio Baldelli (* 1667 or 1677; † 1728) on November 9, 1727. In addition to books, the Accademia now owned ancient works of art, antiquities , minerals , mathematical instruments and globes . The name of the society was from now on Accademia Etrusca delle antichità ed iscrizioni , Baldelli was counted in the membership list from now on as one of the founding members.

In 1728 the first statute was issued, which, like the founding, was confirmed by the Grand Duke of Tuscany , Gian Gastone de 'Medici . The most urgent task was initially to view the inventory and make it accessible to those interested. In 1753 a new statute was drawn up, which is largely in force to this day and regulates access to books and other possessions. According to the statute, the Accademia is headed by an annually changing president, the Lucumone . Lucumone is an old Etruscan official designation. Since this Lucomone is often not a locally resident member, a Vicelucumone resident in Cortona and a secretary are placed at his side. While Lucumone and Vicelucumone offices were more representative, the secretary heads the actual day-to-day business of the Accademia .

Monthly meetings have been held since 1744. They were named after the Noctes Atticae , the Attic nights of Aulus Gellius , Noctes Corytanae or Notti Coritane , Cortanic nights . For a long time they were a significant event in the city's social life. Women were also allowed to do this. For a time Cortona was a center of antiquarian research in Italy. In 1778 the city of Cortona bought the library of Canon Orazio Maccari , doubling the library stock. The library was open to the public through an agreement between the city and the academy. After the death of Maccari, who was the librarian of the Accademia after buying his library until his death in 1808 , the life of the society came to a standstill for a long time without ever falling asleep.

It was not until Girolamo Mancini became a librarian in 1874 that the academy was brought back to life. He was a librarian until 1923 and Lucomone from 1889 to 1923 . The office was no longer transferred annually, but for longer periods of time. Mancini was able to expand the manuscript collection that he published in 1884. He was able to win over Aldo Neppi Modona to redesign and catalog the museum holdings. The academy took over the already existing journal Polimnia as the publication organ , which was replaced by the yearbooks, Annuari , in 1933 . The Academy's property was repeatedly expanded through donations, which over time led to space problems that were resolved in 1944 with the takeover of Palazzo Casali . To this day, the main task of the Accademia has been to view and use its own museum and library property. The academy now operates the Biblioteca del Comune e dell'Accademia Etrusca and the Museo dell'Accademia Etrusca .

The membership of the Accademia is limited to 140 members, 40 of whom were previously resident in Cortona, 100 were external members. There are now three groups of members: Accademici Effettivi (full members), Accademici Onorari (honorary members) and Accademici Corrispondenti (corresponding members). Many famous people were members of the Accademia . Cardinal Alessandro Albani was Lucumone of the Society in 1735 . Philipp von Stosch was a frequent speaker ; Johann Joachim Winckelmann was accepted on August 29, 1760 to honor him for working on the Stosch collection . Friedrich Overbeck became a member in 1851, Ranieri de 'Calzabigi under the name Liburno Drepanio , also Filippo Venuti , Antonio Francesco Gori , Pietro Pancrazi , Ugo Procacci , Celestino Cavedoni , Giuseppe Maria Brocchi , Giovanni Semerano , Mario Guarnacci , Charles Juste de Beauvau-Craon , Gaetano d'Ancora , Ottaviano Guasco , Beat Fidel Zurlauben and Ambros Josef Pfiffig . Stephan Steingräber is one of the current members, who is also one of only a few foreign members at present. The members, mostly doing research, but also artists and writers, were supposed to promote the antiquarian research of the Etruscans. Between 1735 and 1791 nine volumes of the Saggi di dissertazioni accademiche were published, in which the works submitted by members of the academy and read publicly are compiled.