Mickten is a district of Dresden and is located in the northwest of the city in the district of Pieschen . Together with Übigau and parts of Kaditz and Trachau , it forms the statistical district of Mickten . Mickten was first mentioned as Migtin in 1378, the name is of Sorbian origin and can be both a personal name and German settlers. In 1468 the Vorwerk, which had existed since 1421, was sold to the Bishop of Meißen, and after his dissolution the associated corridors were distributed among the local farmers. In 1590 Mickten was the administrative village of Dresden, in 1764 one of the Office of Meißen, since 1843 it was again under the Office of Dresden. As a result of this change, there were two local judges (local court personnel ) until 1836 . With Kleinmickten and Bortzschen there are also two devastations on the Micktener Flur. 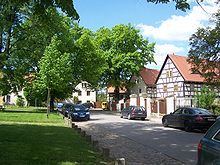 The historic center of Altmickten

Mickten was incorporated into the city of Dresden in 1903. Mickten was connected to the tram network as early as 1899 . In the same year the Mickten tram station was built, which served as a depot for the Lößnitzbahn and today's Dresden transport company . It has not been used since 1996 and was left to decay. After the renovation, it has been used as a shopping center since 2009. The historic Ballhaus Watzke , which was only used as a warehouse for a long time, has already been reconstructed.

The residents of Mickten were parish in Kaditz for a long time. They broke away from the Emmaus parish , bought a villa built in 1902 on Homiliusstrasse in 1938 and set up a chapel for Mickten and Übigau in it - the latter parishioners moved into the Kreuzkapelle in Übigau in 1955 . Noteworthy is the bell hanging in the roof turret, which was probably cast around 1486 and comes from the south tower of the destroyed Sophienkirche . As a result of church restructuring after the fall of the Wall , the now shrunken parishes were reunited in the 1990s and the Mickten villa has served as a parish office since 1999.

After 1990, a large Elbepark shopping park with numerous shops and a cinema was built in the new Kaditz- Mickten industrial estate . The residential area also planned was only partially realized. In 1997, the new development area at An der Flutrinne was built .

Mickten was badly affected by the Elbe flood in 2002 . After the flood, it became necessary to renovate the badly damaged Lommatzscher Strasse and Leipziger Strasse .