In the German-speaking area, a small first German industrial exhibition was held in Mainz in 1842 by the Grand Ducal Trade Association of Hesse in the Deutschhaus . The General German Commercial Exhibition in 1844 in the Berlin Zeughaus with 3,040 exhibitors and 260,000 visitors, the 1850 exhibitions in Vienna with 2,000 and in the same year in Leipzig with at least 1,414 exhibitors turned out to be significantly larger . However, none of these previous German exhibitions offered such a size, such a broad spectrum and truly international participation and charisma.

Due to the great success of these exhibitions, King Maximilian II of Bavaria decided in 1853 to hold one in Munich the following year.

The motivation for this was his desire to consolidate Munich's reputation as a progressive business location and to establish Munich as an important trade fair location. Max II also saw the solution to the social question in the industrialization of Bavaria, which had previously been dominated by agriculture. The exhibition should give a very decisive impulse for the development of industry and craft in Bavaria. His decision to bring this first national overview of the high level of German industry and trade to Munich was part of a very modern economic policy. 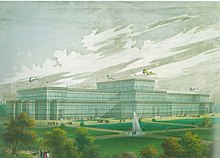 The exhibition building (the "Glass Palace")

The art-loving King Max II had already dealt with architecture as Crown Prince . His endeavor was to give architecture a contemporary and future-oriented form, in contrast to historicist architectural concepts. Impressed by the famous London exhibition building built three years earlier, the Crystal Palace by Joseph Paxton , which he visited for the exhibition there in 1851, he ordered the construction of a similarly spectacular structure. This decision also expresses the high programmatic demands that the king made on this exhibition.

The original plan was to erect the building on Maximiliansplatz . However, the decision of the responsible commission fell on an area near the train station , in the Botanical Garden of the Royal Academy of Sciences (today the Old Botanical Garden ), which was laid out by Friedrich Ludwig von Sckell . The reputation of the chemist Justus von Liebig was decisive for King Max II's approval of this intervention . Bitter about this decision, the then director of the Botanical Garden, Carl Friedrich Philipp von Martius , requested his early retirement. According to plans by the architect August von Voit , the building could be erected in less than nine months on the north side of the garden, facing the Stachus , thanks to its modular construction made of prefabricated iron grids and glass segments .

The over 200 meters long building, which differed from the London model by a flat-roofed transverse arm, was a pioneering achievement of glass-iron architecture in the entire German-speaking area. It was soon given the admiring name of " Glass Palace ". Originally it was planned as a temporary hall that was to be converted into a huge greenhouse after the end of the exhibition. Most of the time, however, numerous international art exhibitions were shown there and artist festivals were held there. On the night of June 6, 1931, the building, including numerous valuable pictures that were currently on display, fell victim to a major fire.

For more information on the building, see the main article: Glaspalast Munich

View into the main hall

View into the main hall

After the construction company Cramer-Klett handed over the exhibition building to the Royal Arar on June 8, 1854 , the exhibition had to be set up within five weeks.

On July 1st, "[...] the majority of the exhibits for the general German industrial exhibition had arrived and the number of them was so extraordinarily large that the inner space of the magnificent building was almost too small [...] "

On July 15, 1854, the First General German Industrial Exhibition was opened. 6,588 exhibitors - almost as many as at the New York exhibition of 1853/54 - were represented, 2,331 of them from Bavaria and 1,477 from Austria. Tens of thousands of visitors from all over the world came, even crowned heads were announced. The Munich city chronicle describes the opening as follows: “The squares and streets around and near the Glass Palace were overcrowded with people, so that it was difficult for both the wagons and pedestrians to get through and order could only be maintained with great difficulty . The doors were opened at 11 a.m., the crowd cannot be described. Everyone who entered was visibly surprised by what was presented to his eye [...] "

The objects on display offered an extremely rich spectrum, ranging from pianos and spinning machines to express train locomotives.

However, this major event was overshadowed by a cholera epidemic that raged in Europe in the same year . In Munich, too, employees fell ill soon after the opening, and later exhibition guests and citizens of Munich too. On July 18, three days after the start of the exhibition, a Swiss visitor to the exhibition, the first victim of an epidemic , collapsed during a performance of “Faust” as part of the accompanying cultural program in the Munich court theater . Within two months, almost 6,000 people in Munich contracted cholera, and almost 3,000 died as a result of the disease. On September 4, 1854 alone, over 100 people died in just one day. Many trade fair visitors and wealthy Munich residents now fled the city, the streets were deserted, and the exhibition halls remained empty. At the end of September 1854 it was believed that the situation was under control and the threat of epidemics was declared over. But one was mistaken, new cases of cholera kept occurring. Even members of the royal family fell ill, such as the former Queen Therese of Bavaria , who died within a few hours of the consequences of the disease.