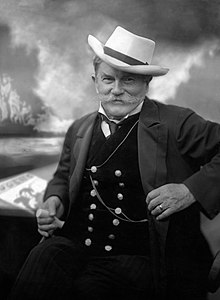 Georg Hirth around 1900 on a photograph by Nicola Perscheid .

Georg Hirth, brother of the painter Rudolf Hirth du Frênes and the sinologist Friedrich Hirth , was initially an apprentice at the " Perthesschen Geographical Institute " in Gotha from 1857 to 1862 . He then studied economics at the University of Leipzig , where he simultaneously edited the " Deutsche Turnzeitung " from 1863–1866 . From 1867 he was a member of the “Statistical Seminar” founded by Ernst Engel (1821–1896) in 1862 and at the same time secretary of the “ Viktoria National Invalidenstiftung ” in Berlin . Here he also worked as an employee of the magazine Die Gartenlaube . In Berlin in 1867 he began to publish the parliamentary almanac (15th edition 1884) and in 1868 the annals of the North German Confederation , called Annals of the German Empire since 1871 , which he published from 1882 together with Max Seydel , the director of the “Royal Bavarian Statistical Office Bureaus “(today the Bavarian State Office for Statistics and Data Processing ). From 1869 to 1870 he was a member of the " Commission for the Further Education of Statistics" of the German Customs Union .

In 1870 he married Elise Knorr, the daughter of the Munich publisher Julius Knorr . From 1870 to 1871 he was the political and trade editor of the Augsburger Allgemeine Zeitung . Since the mid-1870s he turned his journalistic activities promoting arts and crafts to and performed by numerous publications the crafts and the knowledge of the cultural history of valuable services.

In 1875 he founded the printing company Knorr & Hirth with his brother-in-law Thomas Knorr (1851-1911) and with a financial aid of 40,000 marks from his father-in-law and father Julius Knorr. He was a co-owner of the Münchner Latest News , which he took over management in 1881 and made it a leading liberal newspaper, and a publisher in Munich.

In 1894, "Knorr & Hirth, Buch- und Künsterei oHG" was merged with the newspaper publisher and converted into a limited liability company.

In 1896, together with Fritz von Ostini, he founded the magazine Jugend with the subtitle “Münchner Illustrierte Wochenschrift für Kunst und Leben” as a mouthpiece for the Munich art and literature scene at the time. The magazine existed until 1940 and gave its name to Art Nouveau .