A literary magazine is a magazine that deals critically with literature or contributes to literature by printing literary works. The original theme of the literary journals of the 17th and 18th centuries was reporting on the latest scientific work within the scientific world, the res publica literaria , the scientific community . The expansion of the range of topics to include “ belles lettres ”, “beautiful literature”, brought about a thematic shift in the course of the 18th century, which turned dramas, novels and poems into “literature in the narrower sense”. Since the beginning of the 19th century, modern literary magazines have primarily focused on fictional and poetic writings (see also the keyword history of literature ). 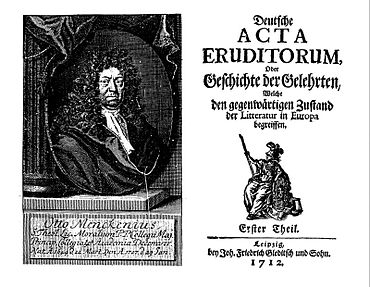 Reports from the sciences. Title page of the German Acta Eruditorum (1712)

Literary journals were originally geared towards the review of scientific publications; their task was to provide information in the scientific community - within the res publica literaria .

The central review organs of the 17th century, the Journal des sçavans , the Acta Eruditorum , edited in Leipzig , were published in Latin and French, committed to the international scientific community. The focus was on the four departments of university teaching (theology, jurisprudence, philosophy, medicine). The natural sciences were part of the philosophical investigation. Among the major subjects of debate, the historical topics gained their own interest (also a sub-area of ​​philosophy), and with them it was possible to extend particularly far into current reporting.

Journals were usually bound annually. The booksellers supplied index attachments with which the volumes competed with the general lexicons .

The review and the extract can be roughly distinguished among the types of contributions; the latter is an excerpt from the most important text passages with page numbers, which in an emergency allows the book under discussion to be quoted from the journal without ever having to hold it in hand.

The literary journals of the late 17th century - Pierre Bayle's projects were revolutionary here - developed into objects of interest beyond the scientific community. Various factors caused this:

In the early 18th century, the market for journals discussing literature (the sciences) exploded, especially in German-speaking countries: Alternative debaters were rare here, and the very broad student body in Germany was an important addressee - with it (only a small number of students became later active in the scientific community) the journal became a subject of broad general interest, which in turn had to be taken into account through a progressive broadening of the choice of topics. Many of these young students and intellectuals wrote for literary magazines or even later edited their own titles.

The discussion of "beautiful literature" as a new topic, 1750 until today

In the second half of the 18th century, the scientific journal market differentiated itself: the original literary discussion, the discussion of scientific publications, now shifted to the specialist journals. The broad literary discussion gained its most important subject with national literature . The future subject was initially embedded in the “beautiful sciences” discussion area. Lessing's letters concerning the latest literature were in transition in the 1750s: topics of broad interest in history are in the foreground. The more literary topics in today's sense were tested in journals such as the Hamburg Dramaturgy before the fields converged in Germany and France at the turn of the 19th century. In the English-language journalism, on the other hand, the old subject of discussion retained its importance well into the 19th century. There were different types of literary magazines, the literary-critical magazines or mixed types, magazines that published reviews and preprints.