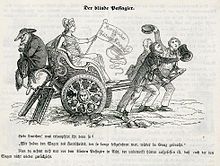 Anti-Catholic caricature in the Munich satirical magazine Leuchtkugeln , 1848. The Catholic clergyman as a fox who travels as a stowaway on the carriage of progress in order to later turn the course of history.

Ultramontanism (in some works of the 19th century also Transmontanism ; from ultramontan or transmontan "beyond the mountains [ sc. Alps]") describes the political Catholicism of the 19th and early 20th centuries, loyal to Rome .

Ultramontanism was a political stance of Catholicism, especially in German-speaking countries including the Netherlands , which was based on instructions from the papal curia , i.e. from the Vatican, seen from there, "beyond the mountains" (Latin ultra montes - meaning the Alps ) , based. The term was also used in France and Belgium ; Here he stood in a more general form for a front position against the emerging liberalism in church and religion and in the political disputes within French Catholicism in the 19th century as a counter-model to Gallicanism .

This attitude went hand in hand with anti-modernism , a trend within the entire Catholic Church from the second half of the 19th century to the beginning of the 20th century, which - based on the decrees of Pope Pius IX.  - turned against social and political reforms to enforce human rights and democracy . A high point of anti-modernist tendencies in the Catholic Church in 1910 was the obligation of all priests to take the so-called anti - modernist oath : from September 1, 1910 they were expressly obliged to reject the "errors" mentioned in the syllabus errorum (list of errors).

The term comes from Latin and initially refers to the areas beyond the Alps from an Italian perspective, i.e. primarily Germany. Only then was the expression used by German liberals and nationalists “to denote a tendency among Catholics which supposedly promotes the interests of the Roman See and the Church unilaterally at the expense of state interests.” This group includes the papal “unlimited monarchist power on the church and on the right to intervene also in the internal affairs of states ... "In 1840 Heinrich Heine polemically summed up the criticism contained in the expression :" Priests have no fatherland, they only have a father, a papa, in Rome."

The view that Catholics should be “loyal to the Pope” in cases of conflict prevailed in the early 19th century, especially in the course of the Cologne church dispute , after the German imperial church had often emphasized its independence from Rome in the previous centuries. Ultramontanism was the dominant current in Catholicism at the time . "Ultramontane" was also used as a catchphrase in the second half of the 19th century in the so-called Kulturkampf .

The complete front page of the local edition of the Kölnische Zeitung of November 8, 1881 consists of election calls against the ultramontanes .

For the liberal voters of the “III. Classe ”in Cologne, for example, the Ultramontane Party was still the central problem in city council elections in the second half of the 19th century; In 1879 they had defeated those who were loyal to the Pope, but when the election came up in 1881, a newspaper war flared up, which showed the closeness of the ultramontanes to the Cologne clergy and to anti-Semitism . On November 8, 1881, the Liberals called across the front page of the local edition of the Kölnische Zeitung ( Kölner Stadt-Anzeiger ) for unity against the ultramontanes; they would have had a different choice

“Written in bold letters to Archbishop Melchers in the Volkszeitung: Cologne has been re-conquered for Rome! That is clear enough. The ultramontane dirt sheet, the Rheinische Merkur , expresses itself quite clearly again . Now finally the liberal municipal council is to be finished off and the influence and arrogance of Judaism broken. Ultramontane city councilors only! Unfortunately, that has become the watchword. "

From the Vatican, Umberto Benigni (1862–1934) established a conspiratorial network of priests and laypeople throughout Western Europe , who informed him about theologians, Catholic writers and cultural workers suspected of modernism. This secret society and intelligence service was called " Sodalitium Pianum ", was known in France as " La Sapinière ", and had various sub-associations and a formal statute. With the help of this information, the Vatican was able to pursue personnel policy (promotion, transfer, etc.), exert pressure on undesirable people and other things.

The Center Party represented this political direction in Germany since 1870 . Shortly after it was founded, the conflict between the Protestant - Prussian dominated German Empire (under Chancellor Otto von Bismarck ) and the Catholic Church began . After the founding of the CDU in 1945 and its non-denominational line, ultramontanism lost much of its political influence.