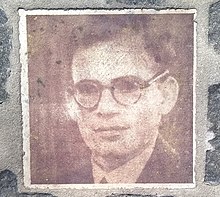 Hans Leipelt, ground monument in front of the University of Munich

Hans Konrad Leipelt (born July 18, 1921 in Vienna ; † January 29, 1945 in Munich - Stadelheim ) was a German chemistry student and resistance fighter against National Socialism . He continued the work of the White Rose and was significantly involved in its so-called Hamburg branch (see people of the White Rose Hamburg ).

Hans Leipelt was the son of the graduate engineer Konrad Leipelt and the doctorate chemist Katharina Leipelt . After the father accepted the position of smelter director of the Zinnwerke Wilhelmsburg in Hamburg , the family moved from Vienna to Harburg-Rönneburg in 1925 , and in 1936 to the Wilhelmsburg Reiherstieg district . Due to the Jewish origin of Katharina Leipelt, the family was subject to the repression of the Nuremberg race laws from 1935 .

Hans Leipelt graduated from high school in 1938 and then signed up for the Reich Labor Service and the Wehrmacht . During the campaign in the west he met Karl Ludwig Schneider , with whom he soon developed an intense friendship. In August 1940, despite high awards, e.g. B. with the Iron Cross , dismissed as a " first degree half-breed ". In autumn 1940 he began studying chemistry at the University of Hamburg . Through Schneider he came into contact with Margaretha Rothe and Heinz Kucharski , who were also critical of the Nazi regime . From the initial discussion groups, the later so-called White Rose resistance group in Hamburg developed. In the winter semester of 1941/42 Leipelt switched to Professor Heinrich Otto Wieland at the Ludwig Maximilians University in Munich , who, as a Nobel Prize winner, was able to afford to train “ half-Jews ” who had actually been denied studies since 1940.

After the execution of the Scholl siblings , with whom Leipelt was close friends, and Christoph Probsts , Hans Leipelt received the 6th White Rose leaflet in February 1943. Together with Marie-Luise Jahn , he brought it to his family and friends in Hamburg in April 1943. They added: “ And their spirit lives on anyway! “, Reproduced and distributed it. When Leipelt and Jahn collected money for the widow of the executed professor Kurt Huber , they were denounced and arrested in late autumn with 28 other activists in 1943. Hans Leipelt was sentenced to death on October 13, 1944 in Donauwörth by the People's Court as a high traitor for listening to foreign radio stations, degrading military strength and “favoring the enemy” . Marie-Luise Jahn was sentenced to 12 years in prison . Leipelt justified his - rejected - request for clemency with the numerous humiliations and insults that he and his relatives experienced as a "Jewish half-breed". The execution Hans Leipelts took place on 29 January 1945 in Munich Stadelheim by the guillotine .

Leipelt's body was buried in the cemetery at Perlacher Forst in Ehrenhain II . Many of his friends died in Gestapo custody or in concentration camps.

The Fachoberschule Donauwörth was renamed the Hans-Leipelt-Schule in 1995 . In 2000, on the birthday of Hans Leipelt, the Hans Leipelt seminar room in the University of Munich, Faculty of Chemistry and Pharmacy, was inaugurated with a speech by Marie-Luise Jahn. The Protestant Church, Deanery Munich, maintains an overnight accommodation for young people in Grafrath , which is called the Hans-Leipelt-Haus .

There is a Hans-Leipelt-Strasse in Munich ( student town Freimann ) and in Donauwörth. In 1960, Leipeltstrasse was named after him in Hamburg-Wilhelmsburg. In 1971 a commemorative plaque was placed in the foyer of the Audimax of the University of Hamburg to commemorate the dead student members of the White Rose in Hamburg, as well as Hans Leipelt, Frederick Geussenhainer , Reinhold Meyer and Margaretha Rothe.