This article or section needs revision: very long lists of literature and publications; Source 'Klaus Weber' meaningful?
Please help to improve it , and then remove this flag.

The title of this article is ambiguous. Further meanings are listed under Kurt Huber (disambiguation) . 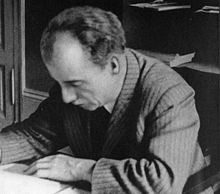 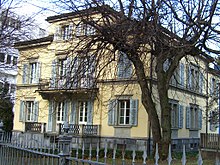 Three years later , Huber completed his habilitation in psychology in 1920 and became associate professor at Munich University in 1926 . Teaching jobs in psychology and methodology offered him a modest means of survival. The appointment to a full chair was prevented by the National Socialist university policy since 1933 . This was justified with the argument that Kurt Huber had a physical handicap due to a nervous disease with paralysis in childhood. The real reason was political denunciations, among others by Herbert Gerigk , who wrote in a letter to the Reichsstudentenführer of November 19, 1936: " Huber's ties to Catholicism and even a decidedly anti-party attitude are clearly proven ." According to an assessment by the NSDAP district office in Munich on January 18, 1940 , Huber was still considered "questionable", but not worth rejecting. Thereupon Huber applied for membership in the NSDAP on February 15, 1940 and was registered as party member No. 8,282,981 on April 1, 1940 . After his arrest at the end of February 1943, he was expelled from the party on April 3, 1943.

His other academic focus was musicology. He was particularly interested in folk song research, which brought him together with Carl Orff and Kiem Pauli , a well-known folk singer and musician in Bavaria . At the instigation of Huber and Kiem Pauli, for example, the first Upper Bavarian price singing was carried out in 1930 in the Gasthaus Überfahrt in Egern , where folk music groups from all over Bavaria and Tyrol performed. Kiem Pauli and Huber have rediscovered songs that have largely been forgotten in Bavaria and made them available for popular folk song singing.

Huber was co-editor of the Lower Bavarian songbook planned from 1931 .

Through his publications on music psychology, music aesthetics and vocal theory research, Huber gained increasing recognition in the scientific world. As early as 1937, the Prussian Ministry of Culture sent a call to Berlin . There he built up the folk music archive. He was also promised that he would be allowed to give musicological lectures there at the university. The promise was not kept, however, because he refused to compose fighting songs for the NS student union (and for the Hitler Youth ). Thereupon Huber, who in the meantime had started a family with his wife Clara, returned to Munich, where he took over a professorship at the university in 1938.

A son of Kurt Huber is the Eichstätter Germanist Wolfgang Huber, born in 1939 . 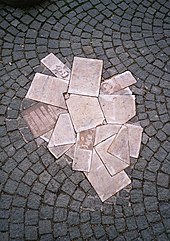 Memorial for the "White Rose" in front of the LMU Munich

Kurt Huber, partial view of the memorial in front of the LMU Munich

In December 1942, the opposition students Hans Scholl and Alexander Schmorell sought personal contact with Kurt Huber, whom they already knew as a lecturer from his philosophy lecture and from private meetings of opponents of the Munich regime. After many conversations, together they wrote the fifth leaflet in January 1943, “Leaflets of the Resistance Movement in Germany. Appeal to all Germans! ”With this open self-description as a resistance fighter, the text deviated from the rather apolitical signature“ The White Rose ”under which the small group of young students had called for resistance against the Nazi regime since mid-1942 .

On January 13, 1943 arrived at the commemoration of the 470th anniversary of the founding of the university to massive protests of students, among which were many war-injured soldiers, against abusive and obscene omission of which appeared as a guest speaker Munich Gauleiter Paul Giesler . Under the impression of these events and in view of the sinking of the 6th Army in Stalingrad and the ensuing military catastrophe, the group believed in the opportunity and the need to promote the resistance against the rule of Adolf Hitler and the NSDAP with stirring words. Huber designed the sixth, most recently distributed leaflet, “Fellow Students! Fellow students! " . In it he called with patriotic emphasis on “settling the German youth with the most despicable tyranny our German people has ever endured”. Hans Scholl and Alexander Schmorell deleted the following passage from the draft text:

“Students, female students. You made yourself completely available to the German Wehrmacht at the front and in the stage, in front of the enemy, in helping the wounded, but also in the laboratory and at work. There can be no other goal for all of us than the annihilation of Russian Bolshevism in every form. Continue to stand united in the ranks of our wonderful Wehrmacht. "

This leaflet was the undoing of the group. After not all copies could be sent, it was decided to distribute the remaining leaflets at Munich University. On February 18, 1943, the Scholl siblings laid out the sheets of paper at the university and threw the rest of the gallery into the atrium. They were discovered by the caretaker Jakob Schmid , detained and handed over to the Gestapo .

While the Scholl siblings were executed together with Christoph Probst on February 22nd, Kurt Huber, Wilhelm Graf and Alexander Schmorell were only sentenced to death in a second trial before the People's Court . Huber and Schmorell were on 13 July 1943 in the prison Munich Stadelheim beheaded , the execution Graf took place on October 12, 1943 also by the guillotine .

In his defense speech of April 19, 1943 before the People's Court, Huber confessed to his moral claims and political convictions, which, for example, Klaus Weber , one of the authors of Illustrated History of Psychology , who refers to the end of the defense speech, characterizes as conservative and folkish . Weber's controversial assessment of Huber's basic political attitude is based on his accusation against the NSDAP that it both destroyed the “true national community” and did not create a “true Germanic leader state”. However, Huber does not associate these accusations with any racist meaning, but rather the freedom of public expression, the fundamental principle of the rule of law and the renaissance of mutual trust between people:

“The fundamental demand of a true national community has been nullified by the systematic undermining of trust from person to person. There is no more terrible judgment about a national community than the admission that we all have to make to ourselves that no one feels safe from his neighbors, the father no longer feels safe from his sons. [...] A state that prohibits any free expression of opinion and places every, but also every morally justified criticism, every suggestion for improvement as 'preparation for high treason' under the most terrible punishments, breaks an unwritten German, Germanic law that is still 'in healthy public opinion' was always alive and must stay alive. [...] For me [...] I claim that my warning to reflect on the only permanent foundations of a constitutional state, to return to the true Germanic leadership state is the top priority of the hour, the overhearing of which only the downfall of the German spirit and ultimately the German people. [...] I demand back freedom for our German people. "

On July 13, 1943, shortly before his execution, Huber wrote a farewell letter to his family, which among other things said: “Rejoice with me! I am allowed to die for my fatherland, for a just and more beautiful fatherland that will definitely emerge from this war. "He dies in the" fight for a new Germany! "

The mortal remains of Kurt Huber were buried in a family grave, grave number 21-W-22, in the " Waldfriedhof Alter Teil" in Munich-Hadern.

If you follow the medical writer Klaus Weber in Illustrated History of Psychology, then Huber's life, which is not straight, cannot be assessed clearly and unambiguously. Monocausal explanations for his upright resistance activity in the context of the "White Rose" are inappropriate. Weber's thesis that Huber was “neither the spiritual mentor” of the “White Rose” nor a staunch “anti-fascist” remains to be examined. At the end of her fundamental study of Huber as a folk song researcher, Maria Bruckbauer sums up the following, which refers particularly to the years between 1933 and 1943:

“With Kurt Huber there is no doubt about the radical nature of the opposition to certain manifestations within National Socialism. However, this opposition must not be set absolutely either in terms of time or content. Even less does it justify a glorification of Huber's various activities. What drove him into resistance was and will be dealt with elsewhere. His love for Bavarian folk music and the work in this area were certainly not. "

Sections and chapters in books