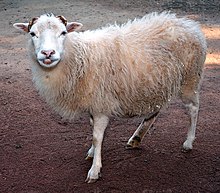 Mother animal in a zoo

The East Prussian Skudde is one of the oldest domestic sheep breeds . It is on the red list of threatened livestock breeds .

The origin of the breed name is uncertain. Only Thilo (1921) gave the word equation “poor” as an interpretation. According to Hinze (1985), the word interpretation of the term “Skudde” can be based on the Lithuanian call for lure or scare away for sheep and goats, “skud (i)” or “skuis”. The comparison with the Pomoramschen (Kashubian) "kut, kut, kut", a call for sheep from the area of Kościerzyna ( Poland ), as well as the appellative for sheep "Kutina" suggests a common Slavic word stem. More likely, however, is the Lithuanian derivation of “skuodimas”: to hop, jump or the Prussian of “skudan”: damage.

In German, Skudde is proven to mean “sheep” or “female sheep” as well as the name of a breed for the former border area with Lithuania. According to other sources, primitive country sheep were kept in the area of ​​the Dutch town of Skuodas until the 1940s, which could also provide information on the origin of the word Skudde. The presumed derivation of Skudde from Skuodas does not lack a certain logic, because domestic animal breeds are often named after their original landscape.

The Skudde belongs to the circle of shapes of the mixed woolly short-tailed Nordic heather sheep .

Until the beginning of the 20th century, the Skudde was the native sheep of East Prussia and the Baltic States . But long before the Second World War, the Skudden were displaced in their original range by sheep breeds with finer wool.

There is reliable evidence of its existence in this area since the time of the order. It has not yet been clarified whether Skudden existed in other regions before, whether this breed of domestic animal is the "sheep of the Vikings " or direct descendants of Neolithic sheep.

Since the Middle Ages, the Skudde between the Baltics in the north and is Lausitz in the south, between the area of origin of the gray Heidschnucke in the northwest German heath and moorland and the home of the Polish Wrzosówka and the Russian Romanov held in the East.

Since the end of the Second World War , the Skudde has been considered extinct in the Baltic States. The reports made from time to time of sightings of Skudden in Samland and Lithuania may describe crosses with Skudden-like sheep imported from Lithuania. Additional confusion was caused in the past by the announcement that Stalin had brought all of the remaining Skudden to Belarus as East Prussian cultural assets .

The existing stocks in Germany go back to remnants that survived the Second World War and were subsequently preserved by passionate sheep farmers and zoos in East and West Germany. Particularly noteworthy are the breeding stocks of the Munich zoo Hellabrunn and the Leipzig zoo. The Leipzig Zoo built up its herd mainly through a surviving dam and her son ( inbreeding ).

Werner Plarre , long-time professor of genetics and plant breeding at the Department of Biology at the Free University of Berlin , devoted himself intensively to the preservation of this breed of domestic sheep.

There are officially around 2,600 purebred animals. The breeding criteria are strict for the purpose of preserving the breed characteristics.

The aim of breeding is to have a robust, small-framed sheep with a special origin for landscape maintenance in poor locations.

The head is wedge-shaped and covered with burin hair. A broad forehead, fine nasal bone and small, upturned ears and a black pigmented nose are other typical characteristics of Skudden.

Bucks form an imposing snail-shaped horn with sufficient distance to the jaw. Zibben should be hornless; small horns, horn stubs, horn beginnings are tolerated. In addition, the bucks have a mane.

The trunk is short to medium long, the pelvis sloping. The legs are slender but strong, with firm claws. The short, up to a third of the wool, triangular tail should not be longer than 20 cm.

The Skudde has a mixed woolly fleece , which means that it has differentiated proportions of upper and lower hair, which differ in the various wool parameters. According to experience, the annual growth of the upper hair is approx. 15 to 20 cm. In contrast, the wool grows about 12 cm / year. A characteristic that existed in the past and should be bred out again was the seasonal, independent fleece change, which made shearing superfluous. The abdominal tissue must be present. After a wool growth period of one year, the shear weight is 2.0 to 2.5 kg for bucks and 1.2 to 2.0 kg for ewes. The fleece consists of a mostly white mixed wool, rarely a brown or black fleece color. Mixed-colored Skudden are also known from old drawings, but multi-colored piebald fleeces are not desired today and corresponding animals are no longer permitted for pure breeding.

Reproductive and rearing ability are essential criteria for the creation of viable population sizes. The Skudde offers favorable conditions for this because it is precocious and has a relatively long reproductive phase. Depending on their youth development, female Skudden can become pregnant as early as the first year of life.

The Skudde is almost aseasonal, which means that compared to wild sheep and various domestic sheep breeds, which only get in heat in autumn, i.e. with decreasing daylight, the animals of this breed are ready to mate almost independently of the season. Sometimes they have young (lambs) twice a year.

On average, one or two lambs are born in a problem-free birth without human assistance. But there are rarely triplets or even quadruplets. Not all of them survive such births. The bucks mostly do not behave aggressively towards the lambs, but sometimes shield the mother from the rest of the herd during the birth process.

The lambing result is subject to strong fluctuations and varies between 100 and 180 percent. Due to the excellent motherliness of the Skudde, there is almost no loss of lambs if the conditions are correct.

The Skudde is an undemanding sheep who is content with poor pastures. The winter forage consists largely of good hay. Mineral licks are necessary, but not adding concentrated feed.

The Skudden can be kept outdoors all year round. A simple open shelter, which is often only used when it rains or when there is heavy snowfall, is sufficient to protect against bad weather. The mixed-wool fleece protects the animals from cooling down or getting wet. The shearing takes place once a year.

Since October 2017, a small herd of East Prussian Skudden has lived in an enclosure on a high-rise roof in Munich's Werksviertel.

Today, Skudden are primarily used for landscape maintenance. They are not very picky about food and do not disdain nettles , thistles or dock .

Another reason for breeding is to keep this breed of domestic animal as a gene reserve.

The Skudde is precocious and, depending on its development, can be used for breeding for the first time at the end of its first year of life. It is one of the mixed woolly sheep, has hard, good claws, is vital and insensitive to the weather. The meat has a distinct venison taste due to the originality of the breed. The small size and therefore also the low live weight of the Skudden cause problems when it comes to marketing: the carcasses of the Skudden lambs are significantly lighter and the valuable cuts that can be marketed are much smaller than is customary on the market. With normal development and adequate care, the best time to slaughter rams is six to eight months old, after which they become fat easily.